A foreword and apology:

Regardless of one’s motives and persuasions, if any work is capable of attracting the charge of sacrilege, one is bound by humility to seek commiseration and indulgence well in advance from one’s perceived targets of raillery. Though the intention here is to engage in the sallies of satirical sport, and all exertion of thought and word is in the celebration of parody, one may yet fall foul of the sensibilities and sensitivities of the religious and spiritual species.

By declaring one’s highest disregard for the theological and spiritual scholasticism of Chinmayananda, but yet striving to desist from conveying the impression of irreverence, we launch into reproducing the following couplets of spiritual poesy from this bard of Vedantic mysticism.

The verse that Chinmayananda is commenting about:

The quote that I try to analyze is from his commentary to Verse 16 in Chapter V of “Bhagavad Gita” or verse 5.16 which is literally translated by him as:

“But to those whose ignorance is destroyed by the Knowledge of the Self, like the Sun, to them Knowledge reveals the Supreme (Brahman)

The Quote from Chimayananda’s commentary on the above verse:

“Similarly the ego (jeeva) looking upto the Aatman finds that ignorance is enveloping the Infinite. This ignorance is not in Truth, just as the clouds are never in the Sun. The finite ignorance is certainly a limited factor compared with the infinitude of Reality. And yet the mist of self-forgetfulness that hangs in the chambers of the heart gives ego the false notion that the Spiritual Reality is enveloped by ignorance. When this ignorance is removed, the Self becomes manifest, just as when the cloud has moved away, the Sun becomes manifest”

Lets delve into the poetry, or may we say the poetastry of this quote. The ego and the Aatman are personified. We believe with all the risk of being 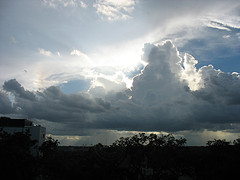 reprobated with ignorance that Aatman refers to the soul. Did we forget that the Infinite is personified too. Now what is this Infinite and how is ignorance enveloping it. Not being blessed with the acuity of this sage, we must wonder in the distress of our dim faculties, why ignorance is not personified.

Oh! for the glory of hyperbole, does ignorance shroud the Infinite in its vainglory. Then we see not, that the Infinite is finite or is it that finite is Infinite. But then in the glorious uncertainties of spiritual journey, even the Infinite is not infinite. Now does the confounded soul see 2 infinites, one that is personal and the other that is impersonal?

Fie on thee! Thou blind muse of parody, do thy not seest where the poesy ends and where sagacity begins?. And Lo behold! even the astral spectacle is lost on you!. Do you need a mind’s eye to see an eclipse unfolding in darkening brilliance, the eclipse of the Infinite by ignorance, to which the jeeva and the Aatman are mute witnesses. But yet we are told that the jeeva is looking up to the Aatman.

Then we are consoled or maybe reprimanded by the sage that this ignorance that is enveloping the Infinite is not in Truth. He then brings in all the power of simile to remind us that this is just the same as that the clouds are never in the Sun.

How gullible of us to think that clouds are in the Sun! Why even worse we were thinking that the Sun is in the clouds. After this we are certain of the situation of neither the Sun nor the clouds. Even if the Sun may be in the clouds, clouds are surely not in the Sun, the inveteracy of the latter truth being clearly proclaimed by the Gurudev. Lo and behold, this Truth is now as clear as daylight with no clouds to darken it.

More poetic assault from the Gurudev and competition for Wordsworth 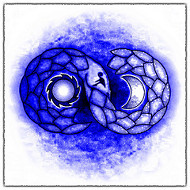 While this Truth sinks in slowly, we now have to contend with finite ignorance being compared to the infinitude of Reality. What is Reality, this other beast of personification that is battling for primacy with the Infinite? What answers are being revealed to us here? Is the Reality infinite or is the Infinite the reality? Let’s not be so impatient, for the reason, if not the answer unfolds in the very next line. We are explained ever so lucidly that the finite ignorance cannot comprehend the infinitude of Reality because the “mist of self-forgetfulness that hangs in the chambers of the heart gives ego the false notion that the Spiritual Reality is enveloped by ignorance”. Here in the union of poetic flight with spiritual garbling, where Wordsworth meets Jiddu Krishnamurti, the doors of Spiritual Reality are thrown open by the Gurudev to the dim vision of mortals. While we pray for the peace of Wordsworth’s soul, we see his gentle mists now buffeted by the storms of self-forgetfulness that are now swirling, oops! hanging in the gas chambers of the heart. Lest we be accused of furthering greater profanity, we stop short of the appellation of the “concentration camps” of the heart seizing the ego in the fascist grip of finite ignorance.

Our ‘respectful adieu to this ‘gem’ of a commentary

We see that there is a also manifestation of the Self, amidst all this infestation of the Reality, the Infinite, the finite and the motley crowd of the jeeva and the Aatman, but in our infinitude of ignorance, we must lay to rest for now our tribute to this eye-opener of a commentary.

Ranganath R writes critically of religion and spiritualism on his blog Critical Sagacity.