Following the success of our first training programme for the 1st year students at the Periyar Maniammai University, it was decided to conduct two more programmes to train all the senior students as well. These two programmes were conducted at the same venue from 21st to 23rd March and 24th to 26th March, 2011.

The first programme was attended by about 50 students most of whom were boys. The programme was well received and we received a good feedback too! The topics dealt were the same as that of what has been described below in detail during the 2nd training programme.

One evening, during their tea time, we visited the men’s hostel and interacted with some of the residents in their dining hall. Most of the students of this group expressed a desire to work for the movement and some of them were 2nd and 3rd generation rationalists. They were pleased for having gained better knowledge required to defend their convictions and to expose claimants of supernatural powers.

The second training programme commenced on the 24th of March and was a tremendous success.  The happenings at the 2nd session were very interesting and requires to be elaborated. The group had about 60 girls while the number of boys was only around 20. The introductory session started with a heated discussion on a number of topics. On the first day we dealt with a very relevant topic – the role of irrational thinking on treatment of diseases, followed by discussions on quackery, the various method of treatment, systems of medicine and ‘so called’ systems of medicine. We showed them videos on a number of topics including quacks performing surgery, diagnosing diseases, treating the patients and so on. Few of them believed in homeopathy, ayurveda and so on, and these students had to be convinced about the irrationalities in these systems. The same evening we were invited to the ladies’ hostel dining hall for interactions followed by a question-answer session.

On the second day of the training programme I mentioned about “spiritualism” and some people took upon a challenge to predict things using their “spiritual” powers. I narrated an incident which happened about 7 years ago – when a science teacher with her students had told me that she could read the number on a sealed currency note by consulting spirits using a planchette. I narrated how she had miserably failed to do so. A girl among the trainees became very upset and told me that I should not talk lightly about such powers. When I retorted as to ‘what if?’ she said she had the power to predict things after summoning spirits. I asked her why not she demonstrate it in front of the assembled gathering and she agreed to do so. 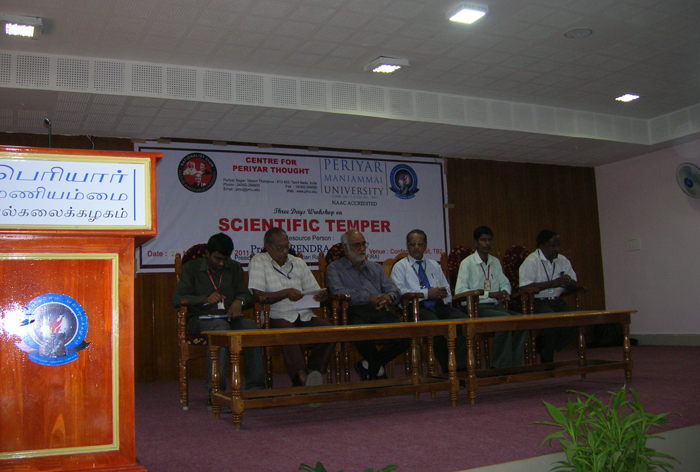 I took out a 500 rupee currency note from my wallet, put it into an envelope and sealed it. I asked her to sign on the seams so that I could not replace it; few members from the audience were also invited to do the same. After this I put the envelope into my pocket and we dispersed for lunch. When we met at 2 pm after lunch this girl by name Shwetha was not to be seen! I had promised her that in case of her predicting the number correctly, all my property would be handed over to her! I had also asked her in front of the audience as to what she would do if she turned out to be wrong and she replied that she would do anything that I would tell her to do. I doubted if she became upset by this condition but her class mates assured me that she had gone to get the number after summoning the spirits. She appeared in about ten minutes time and told me that she had got the serial number of the sealed currency note by making use of her ‘spirtual’ power. As per my suggestion, she wrote the number on the board; and we were then photographed standing side-by-side with the number in between us. I informed her that if she was right, it was an event which could make waves all over the world and I would like this to be on record. She was very much pleased with this suggestion. I removed the sealed envelope containing the currency note from my pocket and asked two members of the audience who had signed on it to come and verify their signatures. The envelope was opened and the actual serial number written on the board and lo! None of the digits were tallying! I pointed out this to Shwetha and asked her as to what she had to say for this. She replied that there seemed to be some problem with the spirit that she summoned and perhaps it would not like to answer such frivolous questions. But, she insisted that it works and asked me for another question from the past which she would answer by making someone else summon the spirit. I readily agreed to it on one condition that the question be answered on the spot, without using any other means, in my presence on the dais in five minutes time.

She summoned some of her friends to get her ‘spiritual’ apparatus, which was a sheet of paper with alphabet and numbers written on it. I asked her to tell me the date, month and year of my birth.  I insisted that the answer had to be given then and there, and told her that I had to lay down this very strict condition as my date of birth could be easily obtained from the internet! She tried very hard to summon the spirits along with her friends but nothing happened! Then I had to ask her to live up to her side of the challenge. She admitted that her ‘spiritual’ experiments had failed and she was willing to do what I would tell her. I told her that ‘all that she had to do was to stop this spiritual nonsense, work for the movement when she had time and hence forward lead a rationalistic life’. She readily agreed to this and this was a very convincing demonstration which had a tremendous impact on the students. In fact on the last day, for the feedback she was a very enthusiastic rationalist, thanked me very much for being patient with her in showing her that her beliefs were wrong. She also pledged to work for the movement to create awareness among her family and friends about rational thinking! 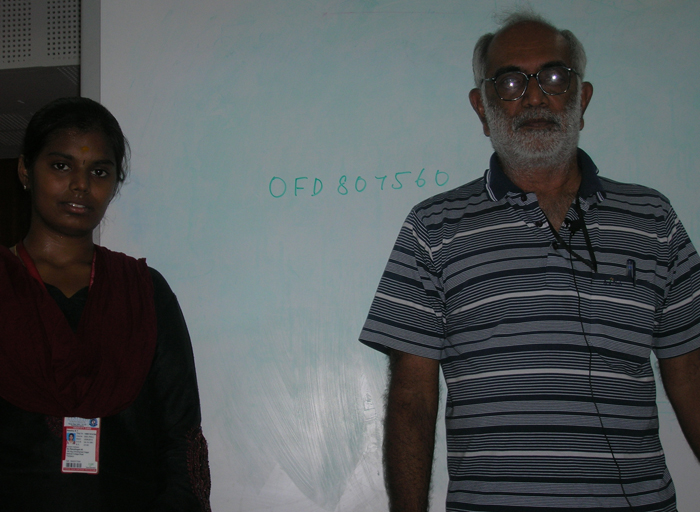 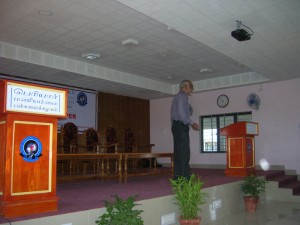 We had one more live demonstration that involved summoning an outsider to the hall and predicting their past using my newly discovered ‘science’ of ‘Asstro numero palmistry’, during when I tell the unsuspecting subject that I have discovered this new science after three decades of research. This has been tried at many of the training programmes and has always been a hit. We start with the past and then go on to the future, when we predict some unpleasant event and then convince the victim to make some financial commitment for a ritual to ward it off! This worked so well here as well that many of the students were asking me for the magic formulae which I used to calculate the events in the lives of the subject! It was so convincing that none of the subjects were willing to accept that it was all bunkum and many of the trainees were unwilling to believe that there was absolutely no supernatural explanation for the very accurate predictions about the past of the subject!

In between lectures we had videos and demonstrations of so called ‘miracles’, and interactions on a number of topics of interest to the participants.

On the last day of the training programme, we had a group discussion in which the participants were divided randomly into groups and interacted on what they were going to do ‘to further the movement in their institution and the society’. One of them was elected as a group leader and she would read out their conclusions and also answer questions from the audience. During the first training programme, it was insisted that the group leader must be a female, but during the second training programme the girls dominated the proceedings so much that we had to request them to give a chance to the boys!

The first batch discussions were not very long, but during the second batch there was so much heated debate that we spent half-a-day on it. There were wide ranging topics right from how to change the thinking of family members and friends to change thinking in the society. Some of the National Service Scheme volunteers also narrated their experiences – when they had visited the villages for the surveys, they had to put up with the barbs from the people. There were incidents told about how they had tried to object to the irrational behaviour of their parents and other elders. 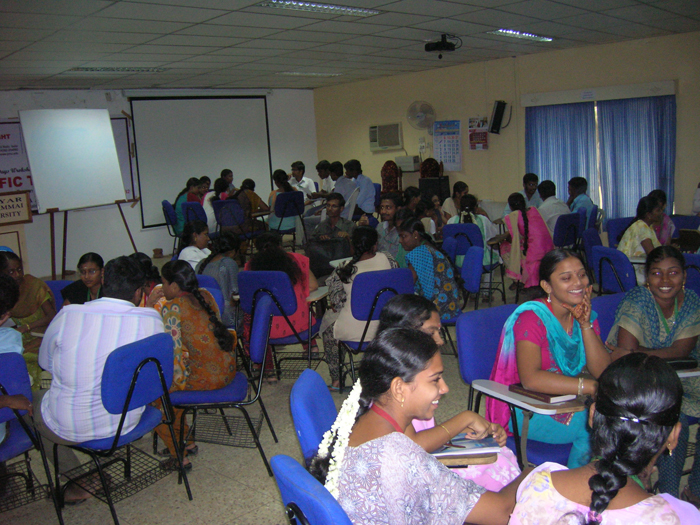 Both of the programmes concluded with many of the students claiming that their thinking had changed. Of course there have been exceptions! One of the girls from the first training programme said in her feedback that she was a theist and nothing could change that.

On the whole, the results had been very encouraging and this is for the first time that a university is trying such an experiment with their students on this scale in a very systematic manner. There are further such programmes planned during their vacations to motivate the staff members. Programmes have been planned for the faculty lasting for several days, and for the non-teaching staff, interactions for a full day. A five-day workshop has been planned for training interested students to develop skills in giving demonstrations on miracle exposure.

I have also received information that there have been some lively discussions post-training in the campus and many new members are keen to enlist themselves. The membership of the rationalist club has also gone up and they have a monthly meeting in which they have many relevant discussions on topics related to rational thinking.