In a country where most of the students are busy with communal and caste based politics one would be definitely surprised to note that such a club exists and is alive and kicking! Last year I had been invited to the Periyar Maniammai University to deliver a lecture on Martyr’s day, and was appalled to hear students praising ‘martyrs’ like Jawharlal Nehru and Sardar Vallabhai Patel! I had to explain to them the meaning of the word and also speak about the Martyr who is my ideal – Bhagath Singh. In the same afternoon we had a program on scientific temper for the Rationalist Club. Right from the beginning the members of this club were keen to organise a programme on scientific temper for their members, and the same was arranged last week by the Vice Chancellor of the University Prof. Ramachandran. 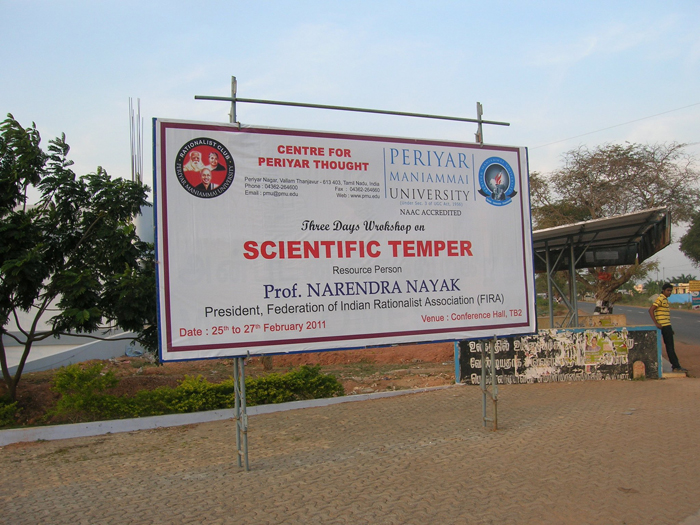 When I had visited their campus for the World Atheist Conference we had discussed about organising training programmes for the younger generation. The Vice Chancellor had instructed the Department of Periyar Studies of the University to conduct this programme. So, in collaboration with them, we decided to conduct a three-day workshop for their students, and the first one of the series was conducted for the 1st year students as the other students were on holidays preparing for examinations.

On the 25th we commenced with an inaugural speech by the Vice Chancellor who exhorted the students to live up to the ideals of Periyar and work for social causes and to improve the level of thinking of the common people. He was very happy that many young people had volunteered for the training. The inaugural session was followed by training sessions on various topics like the prevalent superstitions, unscientific systems of medicine, etc. The participants were initially very reluctant to participate but as the days went by they gradually begun to interact. The plan of action was to get them to interact about their mindset and then bring about a change in them, thereby motivate them into going into the field to influence the attitudes of the public. A few of them were already on-field, working among the people. One of them had been earlier trained by me a few years ago, and thereafter had been going to the people with the movie about Periyar. He had been visiting nearby villages with the DVD and a projector in the evening time, showing them the movie and then conducting Question-Answer sessions. Quite a few of the trainees were already members of the Rationalist Club and by the end of the training session a dozen more enlisted.

As a part of this programme we had plans to visit places each evening with the trainees, and have interaction with the public. On the evening of the first day no program could be arranged as the notice was too short. But the following evening we went to a suburb of the nearby town, Tanjavur, where we had interactions with the locals at a street corner meeting. The response was quite encouraging. On the third day, we had another such interaction and the response was quite good. On the third day, a valedictory function of our training programme was linked to another function – this was the prize distribution for a science competition held for the students of local schools by the Department of Periyar Studies of the University. The meeting was attended by the students and their parents. I was asked to address them, and I preferred an interaction on the so called ‘miracles, their demonstration and explanations’. There was very good response from the students and parents, and at the end of the session some time was given for feedback. I was totally surprised when a 12-year-old girl by name Cynthia came on the stage and said that she had believed in these miracles all along but this demonstration had opened her eyes and she would not believe in them any longer. It was very fulfilling to hear this from a child who spoke straight from the heart. There was another surprise from an older member of the audience who had been the subject for a demonstration on my ‘science’ of astro-numero-palmistry. During the programme I had asked for a volunteer, and since most of the non trainees around were the university staff who had no belief in this nonsense, one of the parents had volunteered. As usual I used the cold reading technique to ‘predict’ his past which he was made to admit was right! When he came on the stage after the programme he told me that he was happy that he could see the truth at least now, at the age of 46! 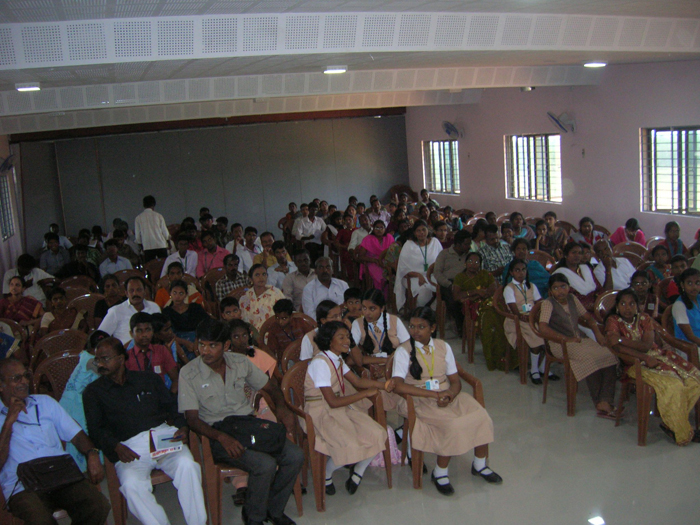 That same evening we visited an extension of a nearby town, Tanjavur, where we interacted with the public at a street corner meeting. The next day was 28th February – the National Science Day. We decided to celebrate it by taking the trainees to a nearby village school at a place called Manjipatti. This was higher primary school and so, we decided to restrict the programme to the 10 plus age group. The response was superb- ‘subber’- in their words! The children were enthusiastic volunteers and our main problem was to restrict them from over-crowding the dais, which was a small area where the teacher stands to teach in front of the black board. But, once these children grow up, they are reluctant to come on stage when they are called – this is applicable to both boys and girls; more so in case of girls! At the end of the program when we asked them for the take home message they were very clear- question everything before you believe it – there are no ghosts, demons, spirits or black magic! It was very heartening to hear that from the higher primary school students of a village school! 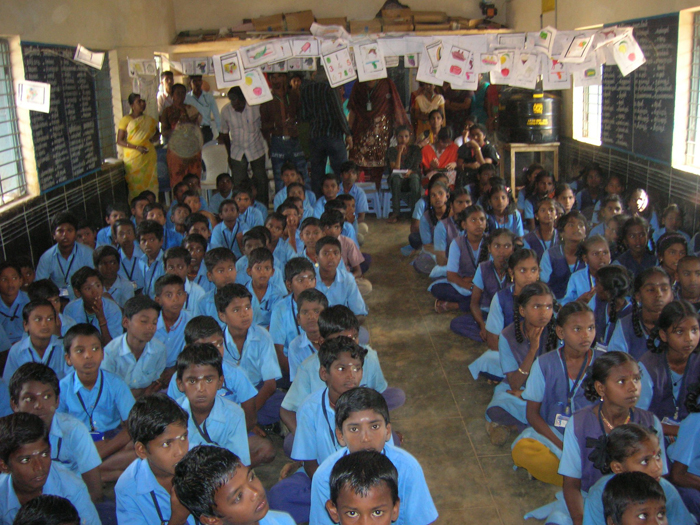 The same afternoon we returned to Vallam and from there we came to Tiruchirappali where we had an interaction with the children of the high schools around the Periyar campus where the world atheist conference had been held a few weeks before. We had an excellent session and as usual in such schools the difficulty was to restrict the number of volunteers on the stage – when we wanted one, ten would come! The girls and boys were equally enthusiastic – the girls a bit more, probably because they were more in number! This was followed by a Question-Answer session during which we had quite a good number of doubts about rebirth, spirits, black magic and such. Even after the others dispersed, some children of the English medium section stayed on with their questions and doubts. It was a very satisfying interaction with these students. 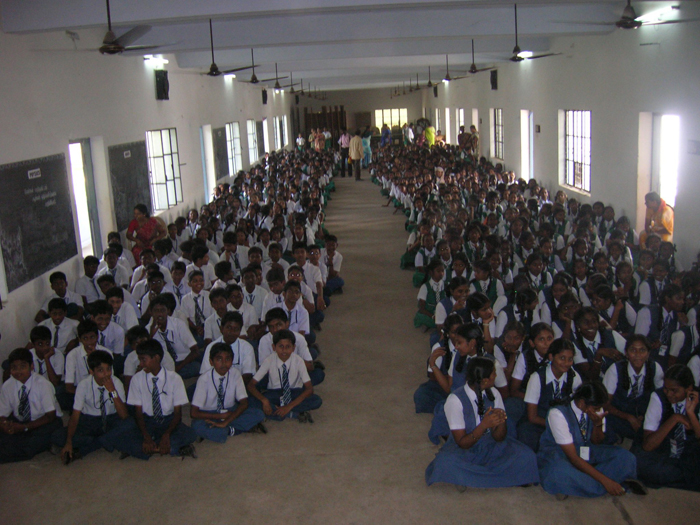 The University Vice Chancellor, Dr. Ramachandran, was so pleased with the response of the students that he asked for repeats of the workshop for the other batches as well. The Department of Periyar Studies is ready to conduct them and have asked me for dates for two more batches; these dates have been fixed between the 21st and 26th of March 2011 at the same campus.

It was not only a great pleasure to conduct this programme but also to stay on the campus in which there is a lot of emphasis on environmentally-friendly-technology and recycling of waste. The barren land has been turned green by the university, which has planted various trees and other flora. The waste water is also recycled by charging a forty feet deep sump from where it percolates to the water table. The garbage is recycled.

Another pleasant thing was that the campus was free of all idols of gods and goddesses; there was no religious ceremony of any sort for any function. I had the occasion to attend their sports day inauguration which was without any invocation or prayer. Though not all the students are rationalists, they are not forced into any sort of ideology. They openly told me that many of them were believers in the supernatural. However, some of them changed their thinking after our interactions; and several became member of the Rationalist Club which was quite encouraging!

The next programmes will be for the seniors who have been on the campus for some years now, and we expect a better response from them!

Professor Narendra Nayak is the president of the Federation of Indian Rationalist Associations. He regularly tours the country giving presentations and holding training sessions and demonstrations to promote scientific temper and debunk frauds and godmen.