Editor’s Note: This article may contain content that some religious people might consider sensitive, but it is NOT a deliberate attempt to offend or provoke any religious group or individual. Rather, the article employs reason and satire to critically examine a very influential aspect of Indian culture, and to redefine our moral imperatives in relation to rational narratives.

Ramayana, the Hindu epic that chronicles the adventures of its highly revered protagonist Lord Rama, is considered among the holiest of scriptures and relics of the Hindu religion. So much is the reverence for it among the masses of India and followers of Hinduism abroad that it would not be amiss to rate it as a Holy Cow – nay, the Holiest Cow – of Hindu scriptures.

Since it is a relic of religion, and given its hallowed reputation, the task of examining it is fraught with most of the dangers that usually accompany blasphemy and apostasy. Because of the intervention of faith, or rather the triumph of faith over reason in religious matters, most religious relics acquire a ring or halo of legitimacy and truth in public discussions.

While the Ramayana is a highly acclaimed epic, its popularity and reverence may have little to do with its literary excellence or about how it conveyed the sentiments of its age. Its popularity and cult-like following is to a great extent the consequence of tradition, acceptance of authority, cultural fascination for extreme idealism and, very importantly, the brute force of religious evangelism.

All this reverential halo and reputation around the Ramayana distracts most people from realizing the sheer absurdity of most parts of its mythology. In all the enthusiasm of worship and devotional fervor, many of its narrative and ideological inconsistencies and contradictions are never critically examined and responded to.

It is left to the lot of few stray critics to carry the cross of questioning the discordant elements of fantasy in which these epics and scriptures abound. Rather than employing the conventional method of re-examining the Ramayana through critical discourse, we attempt here the device of parody and humor to lay bare the many oddities and loose ends that this epic is replete with.

With this background we launch into what may be termed a ‘Ramayanic Absurdity quiz’, where, apart from poking fun at the frailties of Ramayana’s narrative using logic and reason, we also raise questions that will hopefully stimulate critical re-examination of the epic and its ideology.

As in any subjective exercise, there are no absolutely right or wrong answers, only choices that debunk absurdities the best. In many cases, multiple choices may apply. 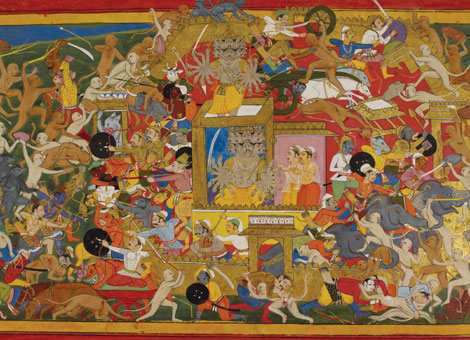 Format: The quiz takes selected narration passages of Ramayana’s Balakand section from a Hinduism website source and then raises quizzical questions on them. Where required the quiz is punctuated by skeptical clarifications and comments.

Narrative 1: The two chief priests of King Dasaratha’s court, who advised him on the matters pertaining to religion and religious rites and rituals were Vasishta and vamadeva.

Question 1: The Chief priest Vamadeva was the incarnation of which Hindu god? The choices are:

Narrative 2: As the Ramayana mentions, Vasistha, who is Brahma Rishi, was also one of the chief priests of King Dasaratha’s court.

Question 2: Why did Vasistha take up the job of a Chief Priest in King Dasaratha’s court? The choices are:

Narrative 3 : Dasaratha was such a great king , but he was not at all happy. He had no son to make him happy.

Question 3: Why was King Dasaratha craving for the birth of a son? The choices are:

Narrative 4 : King Dasaratha held a yagna to materialize his craving desire for a male progeny.

Question 4 : What is the name of this Yagna? Choices are

Narrative 5 : When the Ahwamedha yaga of King Dasaratha was going on, the Devas led by Indra went to Brahma the creator. They complained to him about the troubles and harassment done by Ravana.

Question 5: In what ways was Ravana harassing Indra and his devas? The choices are:

Narrative 6 : Brahma listened to them and said , Yes, Ravana cannot be killed by any devas, or danavas or gandharvas, or yaksha, or any rakshasas. However because of his arrogance he forgot to get immunity to be killed by a man. And that his how he will be killed said , Brahma.

Question 6: What does this reveal about Brahma and Ravana and the wisdom of the gods?. The choices are:

Narrative 7: While they were talking thus, Lord Narayana came there with his shankha , chakra ,he was seated on Garuda. Brahma requested to him to be born as a son to the king Dasaratha and also told that four sons will be born to the king. He requested Lord Narayana let all the four sons be the Amsas of you. Your avatara will be of immense help to the mankind and also for us.

Skeptical wisecrack : So Vishnu was born as Rama, his Sudarshan Chakra was born as Lakshmana, the conch was reborn as Bharata and his mace took birth as Shatrugn. In all this re-birthing privilege rigmarole, Vishnu’s wedding ring to Lakshmi felt left out and started sulking. Vishnu pacified it by promising that it to be reborn as a wedding ring in the Janaka’s queen’s jewelry collection and till such time to adorn his couch, Seshanaag as its nose-ring. But even more upset than that was Vishnu’s chauffeur, the mighty Garuda miffed at being excluded threatened to go on a strike or defect to Shiva’s camp.

Question 7: How did Vishnu pacify Garuda? The choices are:

Narrative 8:  Lord Narayana listened to the words of Brahma, and said that I have decided to be born in the world of men and I will destroy Ravana and his entire clan . After killing him, I will rule the world for 11,000 yrs.

Question 8: The only problem here is Sri Narayana did not specify which world he would be ruling for 11,000 yrs. Surely it cannot be our world. Let us make some ‘informed’ guesses. The choices are:

Narrative 9: To assist me in this avatara, he told the devas that they will also be born in the world of men as Monkeys as Ravana had forgotten to ask for immunity of death from monkeys.

Question 9: Lets see what caused Ravana to make such a critical omission. The choices are:

Narrative 10: The Putrakama yaga came to an end . From the fire came a divine form. The divine form held in his hands a bowl with a silver covering.

Question 10: Who was this mysterious divine being? The choices are:

Narrative 11: Sage Vishvamitra told the king about the Yaga he was performing and the troubles he has to suffer from the rakshasas who could take any form any time. I cannot curse them because there is no place for anger when I am doing this yaga.

Question 11: Why were the Rakshasas troubling Sage Vishvamitra and his Yaga (Yagna)? The choices are:

Narrative 12: When they reached the southern bank of the river Sarayu, sage Vishvamitra told Rama to take water in his palms and he taught him the mantras Bala and Prabala. They are the daughters of Brahmaji, the creator. You will never feel tired nor hunger will trouble you nor thirst will trouble you.

Question 12: What do these mantras signify about Vishvamitra and Brahma or about this epic for that matter?. The choices are

Narrative 13: The yaga proceeded with out any trouble for the first five days. But on the sixth day all of the sudden there was a lot of commotion . Rama and Lakshmana knew that these are the works of the rakshasas. Rama took up the astra by the name manavastra and aimed it at the rakshasa by the name Marichi. The astra struck marichi and threw him about hundred yojanas in to the sea but it did not kill him .

Question 13: What do these signify about the Rakshasa strategy, weaponry or about this epic for that matter?. The choices are:

Narrative 14: King Janaka narrated as to how the bow came to be with him , and he also spoke about his daughter Sita, who was found as a beautiful child from the mother earth, when he was preparing the earth for doing a yaga. That is why she is named Sita, and whoever is able to lift the bow, Sita will be their bride.

Skeptical wisecrack: Though Janaka does not specify, we can infer that he is referring to the Shiva Danush. If you are inclined to trust Puranic babel, the bow apparently passed from Shiva to Parashurama and then to King Janaka. Then again let’s not question why a nemesis of Kshatriyas like Parashurama would give the bow to a Kshatriya like Janaka whether as a gift or for safe-keeping. One is also apt to wonder that Janaka’s season of gifts did not end with the bow, with Sita also ending up as his gift from Mother Earth.

Question 14: Why did Parashurama give the bow to Janaka, and why did Janaka use it for Sita Svyamvar? The choices are: 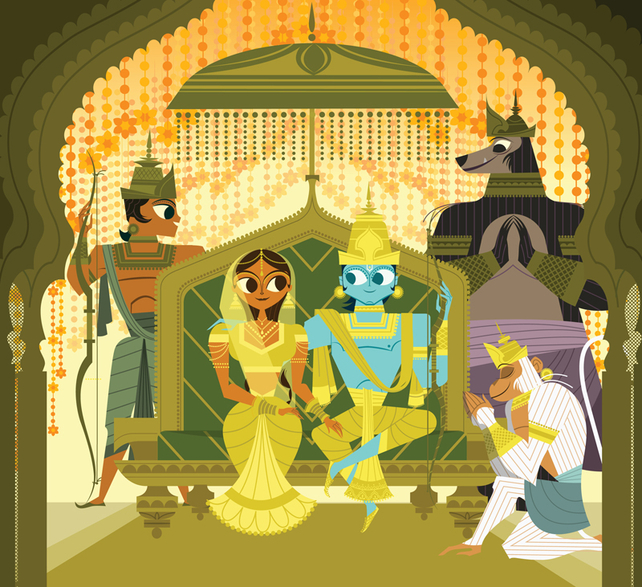