With due apologies to the citizens of Chikmagalur, I must narrate my the recent tour of Mangaluru and Chikmagluru, which are the right names of these places.

The importance of Chikmaglur lies in that the Saffron gang has taken a vow to make it the Ayodhya of the South by raising a dispute about a hill called Baba Budan Giri, now renamed Datta Peetha. An agitation has been started for the ‘liberation’ of the same, and an entirely new ritual has been invented, involving the wearing of a mala, known as a Datta mala, around their necks, visiting a certain spot on an appointed day each year and generally making a nuisance of themselves. At the appointed time the entire town becomes a fortress; educational institutions are closed to accomodate the thousands of police who must be present to protect the spot. Otherwise this is a peaceful place where Hindus and Muslims have been living side by side for centuries. 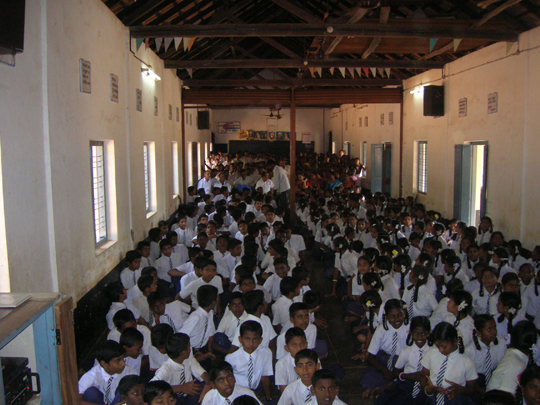 When a school in a place called Giriyapura in this district invited me to speak to their students about scientific temper on their annual school day, I gladly accepted the invitation. The Science Center of the district was also quite happy to arrange a program for the public in the evening. We decided to also hold a meeting of the rationalists in that area to start an organisation. So, it was already a multi-purpose visit. Then, one more agenda was added to the list. There were problems at a school on the way at a place called Kokradi, right in our district. In this school there were incidents of ‘spirit possession’, and the headmaster wanted me to come over and speak to his students and parents on these supposed events. So, we started for this place on the 14th and arrived at the school in Kokradi.

This school is situated in idyllic surroundings on a hill and the locals had been taking a great interest in developing it. Since the gender-bias towards males in the town had resulted in the townsfolk sending the local boys to schools as far as 30 kms away for higher quality education, the students here were mainly girls and those boys whose parents could not afford the expenses of sending them to the supposedly better schools! The problems had started recently with some girls fainting in the school and behaving in a weird manner, as though they were ‘spirit possessed’! The solutions proposed were the usual ones of propitiating these spirits with appropriate rituals prescribed by the local shamans! However, since these did not work, the parents and teachers were in a quandary as to what could be done. A proposal was put forward seeking to invite me to the place to speak and educate them on these phenomena. 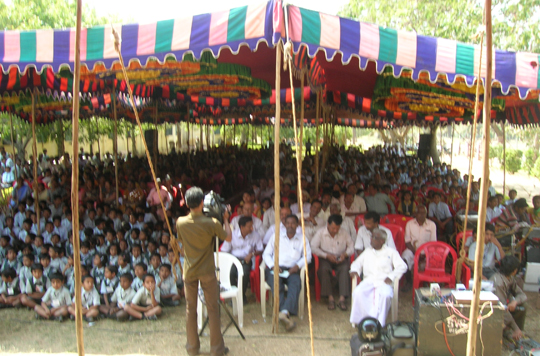 I had a two hour interaction with the students and their parents explaining to them how such things happen. I also demonstrated many so-called miracles, many of them on the girls who were supposedly affected by these ‘spirits’. The problem had been again aggravated by some reports in the local press that  had added spice to the happenings and had made wild speculations about the origin of these ‘spirits’! It must be remembered that these girls were the ones who had recovered. The most affected ones had stopped coming to school. So, I suggested to them to consult our psychiatrist who had promised to provide help free of cost.

After this we proceeded to Chikamaglur where we stayed overnight. The next morning we went to the high school at Giriyapura, which is about 60 kms from Chikamaglur. This school is situated about 3kms from the Giriyapura village in a beautiful campus with large grounds and had excellent facilities. There were about 400 students and their parents who were celebrating their school day with a parent-teacher meet that morning. They held sports, entertainment and educational programs. Our interaction was of the last category. The president of the school management committee was a stickler for time and had a stopwatch on the table in front of him. I was given exactly two hours for the interactions and we had a very good one with a number of demonstrations followed by a Q&A session. I fielded a good number of the questions from the students and teachers, though the parents’ response was lukewarm. We were very happy with the arrangements made but had to return immediately to Chikmaglur, which is about an hour’s ride. We had a program there in the evening at 6 pm. 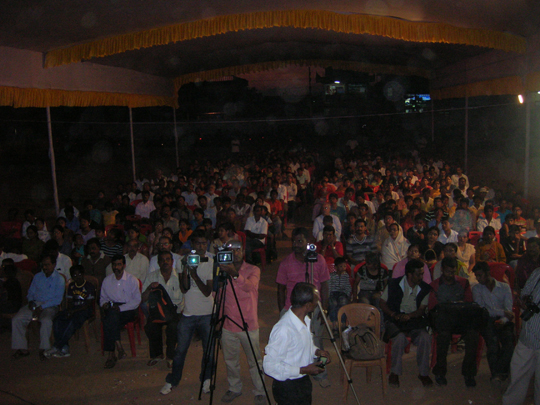 Though we reached well before time, the program started only at around 7pm. That was fine by us as we preferred to wait for nightfall. The program was an open-air one and we had planned to show video footage using a LCD projector. There were many functionaries of the education department as well as some local dignitaries on the dais. But, none of them took any time to speak as they felt that the audience was very keen to experience the program rather than spend time on lectures! The audience was comprised of members of the public, and the students and teachers. Some schools had informed their students to come to the program and bring their parents along. Though seating arrangements had been made for a thousand, they were all occupied, and at the peak time it was standing room only. We demonstrated to them many so-called miracles, showed them video footage and also invited them on-stage to experience for themselves how even an ordinary person could perform many of these apparently supernatural feats! This demonstration was followed by a Q&A session, but with a rider that it would not be debating platform. There were a good number of questions from all the sections. There were also some people who already had a rationalist mind-set but had not met any like-minded people thus far. They were glad to join us and promised to keep in touch. 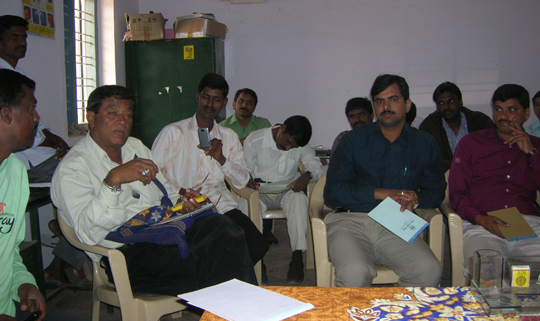 The next day we had a meeting at the Chikmaglur Science Center with the activists who were interested in the movement. We had about 30 of them from all over the district. There were introductory remarks followed by remarks from Swami and Natekar who had come as the representatives from the State federation.  We spoke about the need for a state-level organisation and the pros and cons of the same. There were a number of queries from the members, and all finally came to the conclusion that there was a pressing need for one. So, it was decided to form a state-level organization with an ad-hoc committee appointed for this purpose. The office bearers were also nominated and they all agreed to function until a proper body could be formed and elections take place. It was generally felt that there is a great need for such an organisation, especially since the district has become a communally sensitive spot due the irrational activities of some vested interests that were disrupting the peace. It was also decided to have the training program on scientific temper at the district in the next few months as there was a demand for the same from activists who wanted to approach the public with activities designed to improve their levels of critical thinking.

After the meeting was over we returned to Mangaluru, and on the way back enjoyed some of the wonderful Western Ghats scenery that we could not appreciate on our way forth.

Professor Narendra Nayak is the president of the Federation of Indian Rationalist Associations. He regularly tours the country giving presentations, holding demonstrations to promote scientific temper and debunking frauds and godmen.