One of the most common criticisms of our work at Nirmukta is that we are hurting Indian culture because of what we do. I believe this is the exact opposite of the truth, and those who make such arguments (the puritans) are in fact the ones severely limiting the cultural narratives (and ergo, people) of our society.

It doesn’t take a social scientist to see that cultures are vast, overlapping and ever-changing sets of ideas passed down through generations. Culture is especially important to us humans, since we depend on it to shape our societies. Everything from our ways of cooking food to our language and social customs are aspects of culture. Religion, on the other hand, is a unique subset of culture that functions to institutionalize superstition while keeping it separate from other aspects of society, in order to limit the damage that it causes. Quoting from here:

Religion as we understand it today is a modern concept denoting a type of belief system that can in theory be distinguished from Government and culture at large, but in practice is very often not. It is a concept to which we accord undue reverence as a species, a reverence that co-exists with varying degrees of understanding that the factual claims that religious belief systems profess are to be ignored when real decisions about politics or ethics are to be made. In essence, humanity has figured out a system for allowing people to cling on to their superstitions while limiting the damage caused by them.

The culture of India is undoubtedly one of the most complex and diverse of any in the world, containing the ideas, practices and beliefs of thousands of societies past and present, a vast many ideas adopted from visitors arriving from beyond India’s borders and even a few traditions adopted by the Indian diaspora abroad. Indian culture is as much about the great atheistic and anti-Vedic philosophies that emerged out of India’s enlightenment age about 2500 years ago, as it is about the thousands of superstitious beliefs that are practiced today and have been for the past few hundred years. 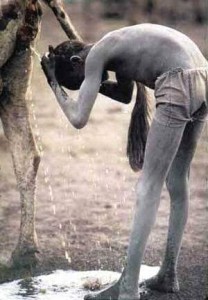 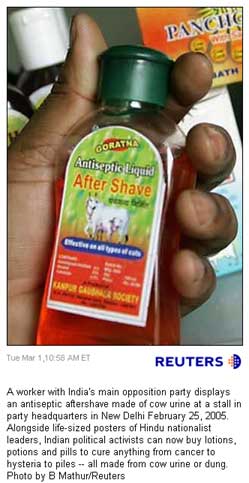 These two images show us undesirable aspects of Indian Culture that we should challenge and get rid of. These practices are defended by the puritans, often using scripture.

Bhishma: One should never feel any repugnance for the urine and the dung of the cow.

Vyasa: One should for three days drink the hot urine of the cow.

Vasishtha: By bathing in water mixed with cow-dung, people shall become sanctified. 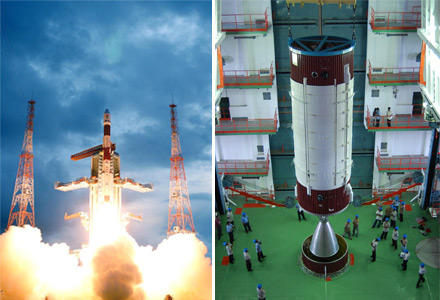 This is Indian Culture too! ISRO Image of Chandrayaan-I, which successfully landed a probe on the moon.

I’ll finish with a few lines from here, where I argue that those Atheists and Freethinkers from India who still subscribe to the Hindu religious identity should question their reasons given the facts about culture and religion.

We can still appreciate and gain immense pleasure from the practices and philosophies that are part of India’s glorious past. These ideas may lie today within the grasp of institutionalized Hinduism, but we cannot allow this tyrannical label to deny us our heritage. Appreciation of Indian art and culture is our right just as much as it is to those who label themselves ‘Hindus’. The rational inclusion of these aspects of our history into our lives can be a fulfilling experience. The fact that we reject the label ‘Hindu’ does not mean that we cannot participate in certain festivals and social rituals that are part of our culture. Ancient myths are fun from a cultural perspective. We can learn to enjoy them for what they are without assigning any factual significance to them. The art, architecture and culture inspired by the ancient Greek and Egyptian myths are just as powerful reminders of human achievement today as they were when those myths were believed as fact.

In abandoning the ‘Hindu’ label, we are keeping India from descending into a cultural black-hole. We are liberating Indian culture from the still sickness of ideology by embracing the freedom of thought that creates a dynamic and progressive society.