On January 1st, 2011, I attended a marriage at Shimoga, a place about 200kms from Mangalore. One reason for scheduling the marriage on the first day of the new year might have been to solemnise it on that unique date (1/1/11), and another must have been to have it on a day that was convenient for all. The couple’s names were K. Ravibabu and Ruchira. The event was organized by the bride’s father, Kottur Shrinivas, who has been a part of the progressive movement for the past two decades. Ravi’s parents did not attend, but the presence of a large number of activists and leaders from various progressive organizations of the district and other parts of the state was heart-warming. 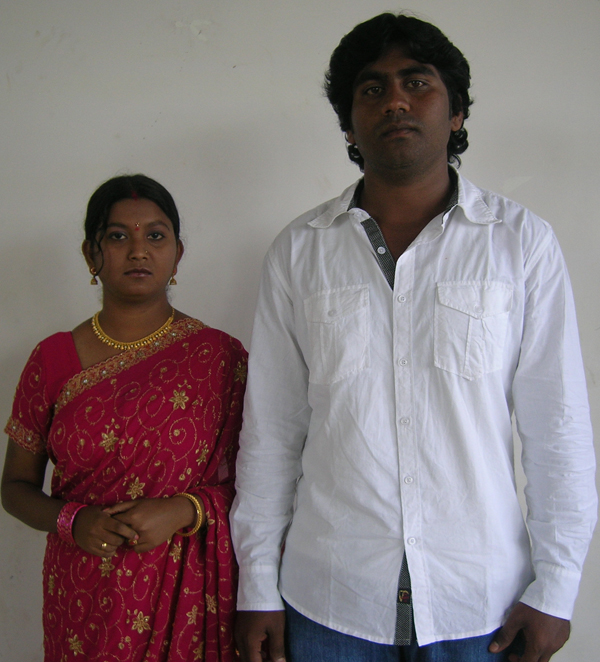 Ravi and Ruchira are members of the ‘Raith Sangha’ – a state level organization of farmers. The late Prof. Nanjundaswamy, a leader of the rationalist movement, was one of the founders of this organization. Not only did he organise the farmers into a movement, he also brought the element of rationalism to the movement. His ideological conviction was aligned with the struggle of the farmers, for freedom from exploitation of all kinds, including ones perpetrated by the priesthood. He wanted to effect a change in the very thought process of the farmers. One of the ways in which farmers are exploited is by the massive loans they take to conduct the marriages of their female dependents. In order to get rid of this problem, simple non-religious marriages were advised and thousands of such were performed. Seeking a suitable simple ritual to replace the conventional priest-conducted ceremonies, they settled on a non-religious ritual involving the bridegroom tying a black beaded necklace around the neck of the bride, and her slipping a ring on his finger, if they wished. They also exchange garlands and more importantly recite an oath to lead lives of equality. This was devised by Rashtrakavi Kuvempu whose actual name is K.V.Puttappa, a well known educationist, author, playwright and a revolutionary thinker. He boldly gave a call to all, to leave temples, mosques, churches and be human. He has been also honoured with the Jnanapitha award and the title Rashtrakavi. He had also proposed a name for the person who would over come all these barriers- Vishwamanava- human of the world.

His call to all was this:

There is no need for you to change the world, society or the priestly class. Nothing is possible unless you change your own thinking. If you have any honesty- bring about a change in your own life first. Get married without any religious ceremony, without dowry and all the wasteful expenditure associated with it. At least once in your life time stand for the ideals that you hold dear and the values that you treasure and oppose silly, superstitious and exploitative customs. Then only will you realise the joy of practicing what you stand for. Principles are not some useless slogans to be chanted but are to be observed in our daily lives. He also said that his marriage had taken place when he was not in a position to decide how it should be but he saw to it that his only son and two daughters were married that way.

The leaders of the Raitha Sangha had to find a via media as many of their members were from superstition-ridden backgrounds. So, this ceremony proposed by Kuvempu was adopted to appease those who wanted a ceremony to replace the one presided over by Brahmins. Many of those on the dais were ones who had been married without any religious ceremonies, including myself. I was one of those who had not only married with no religious ceremonies but had refused to exchange garlands or even tie the customary black necklace around the neck of the bride. In fact, one of the ladies who spoke mentioned how her uncles were upset about her marriage to which even they had not been invited! Her father had gotten her married in the presence of the parents of the bride and bridegroom, followed by a cup of coffee for all of them. The marriage had cost only a few rupees.

All the speakers mentioned the relevance of such marriages which would prevent the farmers from falling into the clutches of money-lenders and wasting their hard-earned money. 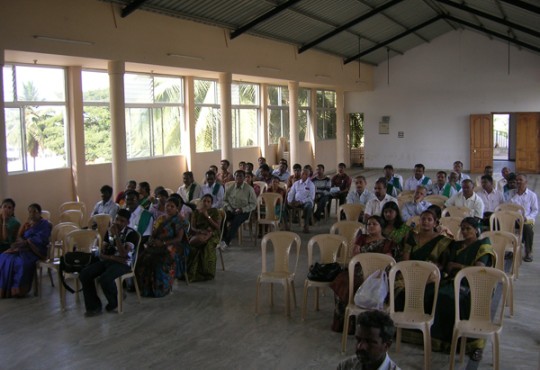 The ceremony which took an hour or so was attended by many members of the movement and a few close friends of the family. It was followed by a simple lunch, and the whole affair must have cost a few thousands in contrast to the hundreds of thousands spent on such ceremonies. In fact one such could cost a million or at least half a million rupees, even for middle class families, while the rich are known to spend hundred times this amount. All marriages usually have several such ceremonies involving exchanges of huge amounts of money and jewels for the bridal couple. As technology advances, the priests are increasingly adept at bringing in new rituals involving the latest among technological advancements! 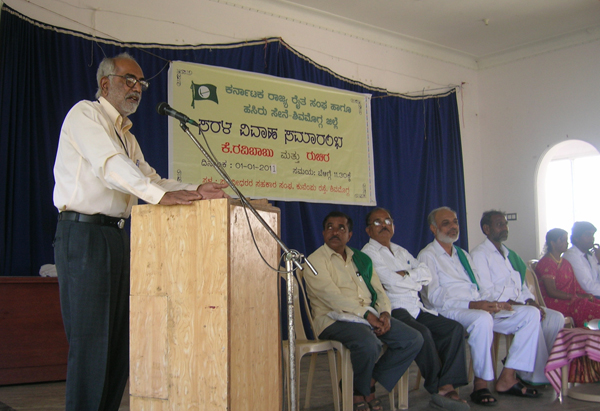 Yours truly speaking at the ceremony

All the ceremonies were over by 2 pm and then came the other important event of the day: The meeting for the proposed Rationalist organization in the district! Many of the important ideologically-inclined guests stayed on for the meeting. The majority of the participants were young people and quite a few of them expressed their interest in the movement after watching the miracle exposure program in their educational institutions, which made me very happy! There were frank discussions about the need for such an organization in their district. The office-bearers of the Karnataka state federation also put forth their points of view. They decided unanimously to have another meeting within a fortnight’s time to decide on a further course of action.

The young Rationalists of Shimoga

Such marriages are truly made on earth!

Professor Narendra Nayak is the president of the Federation of Indian Rationalist Associations. He has been traveling the country, holding demonstrations and teaching scientific temper to school children, for the past 3 decades.