Mujtaba Lokhandwala, an educator and freethinker based in Pune, first called for a meet in Pune on the Indian Atheists Facebook page. He offered to coordinate the meet, and there was immense enthusiasm from people in Pune and surrounding areas. The meet was held on the 12th of August, 2010, and Mr. Mujtaba informed us of a successful meeting in the following mail: 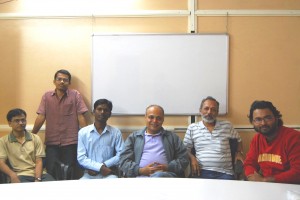 Thank you very much for joining me for the first free thinkers meet. From what I have heard about other cities including London, we have had a good head start.<

As per our discussions, I am recording the objectives that we have decided for the initial phase of our activities:

Please also share your ideas about how you think we should take the things ahead and when and where do we meet again.

Spurred by the meet in Pune, a few Mumbaikars decided to have a meet of their own. Prateek Katekar, Kushal Madane and a few others helped organise and attended the meet. Prateek had the following to say about the meet:

To sum up, it was quite a successful meet and would like to have another one with bigger numbers in future.

A Maharashtra section has been created on the Nirmukta Forums, and Prateek is the moderator of the new Mumbai forum. We hope that this forum will become a great venue for Mumbai Freethinkers to come together and share ideas.

Meets have been planned for Delhi, Chennai, Kolkata and Hyderabad in the first month of the next year! The Delhi meet has been announced and will take place on the 23rd of January, 2011. View the location and other details here. Also, please go to the event page and RSVP on facebook!

Other upcoming meets will be announced shortly.