After providing transportation services to the population of this country, the Indian railways have also entered the field of health services. Last June I was surprised to see very bold flex prints in railway premises, claiming that “Sin” causes disease. When queried, the authorities had replied that these were put up in public interest. One could understand the anxiety of these authorities to bring this latest scientific research to the attention of the ignorant public that a really dramatic, earth-shaking discovery had been made that sin causes disease! However, the prints were silent about treatment. Now, latest research has proven that a gadget can be a panacea! I had been in the waiting hall of the South Western Railways at the Mysore Railway station on the 25th of October, when I saw a gadget in the hall. This, being the latest discovery in the field of medical science had been now provided for the benefit of railway travellers in general, and the upper class ones in particular. This gadget promised to set right as many diseases as exist in medical text books, except for a few about which we will see later. It ensures good blood and lymph circulation. Furthermore, it “Ensures Proper Secretion of Harmones [sic] and Enzymes from al Glands”. It increases immunity, burns excess fat, keeps your body sleek and trim. It also influences lipid metabolism by bringing down LDL cholesterol levels. Besides, it also brings down, miraculously, LDL cholesterol levels! Of course it does not say anything about increasing HDL cholesterol, but since most of the lay public does not understand this, it has been left out! Perhaps one can expect it to do that too. 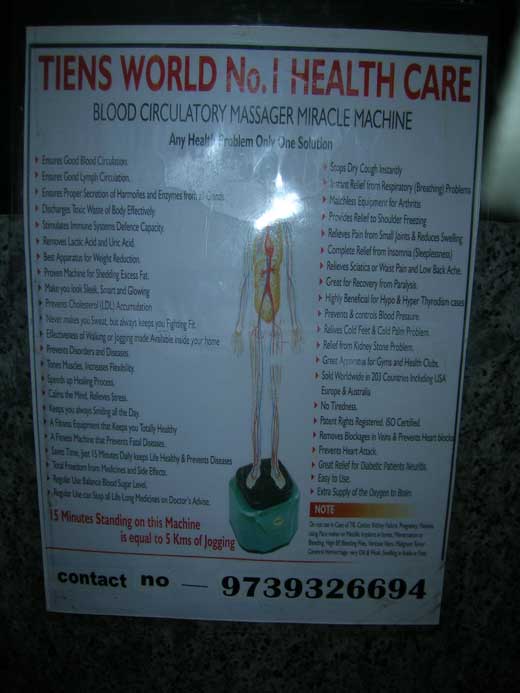 The contribution of the gadget to the general health of an individual is very, very valuable to say the least. As already mentioned above, it increases immunity and also prevents disorders and diseases. One can expect to be immortal using this machine as it not only reverses ageing but also provides freedom from fatal diseases! It also discharges toxic wastes from the body effectively (probably through air as nothing has been said as to how it is going to be accomplished). The fitness freaks have not been left out, in fact they are told that it never makes you sweat, but you are always kept fighting fit! It also promises exercise equivalent to hours of jogging within 15 minutes in the privacy of ones’ home (and of course, those who painted the blurb mention that the machine can be also kept in public places)! It also tones muscles and keeps the body fit. What more can one desire?

Going on, the diabetic and thyroid patients are not kept out. It promises cures for both. In fact, its miraculous effects can be felt on both, hypo- and hyper-thyroid patients – both the types would become euthyroid! Patients of myocardial infarction or heart attack, take heart, you can be totally cured by this machine. Psychiatric illnesses the bane of the modern society can be also effectively dealt with by this gadget. It promises cure from insomnia, tension and a myriad of other mental illnesses. (Having benefited so many, how can blood pressure be ignored?) For those who have not known the machine and hence have fallen prey to disease, there is nothing to worry – it also speeds up the healing process! Neurological patients need not feel out left out, it cures paralysis and diabetic neuritis. The respiratory system has not been ignored – relief from allergy, dry cough, etc, are also indicated on the blurb. 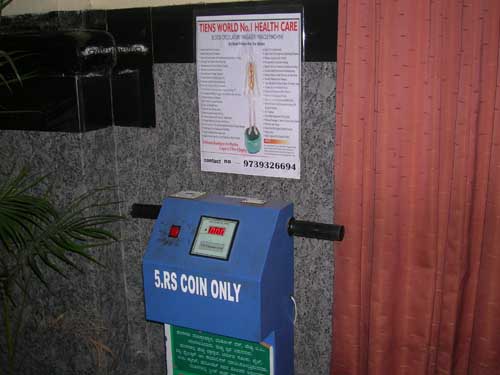 For those who may think that this comes at a heavy price, there is a surprise. It costs only Rs. 5 for 15 minutes use, which is equivalent to a 5 km jog. The instructions are simple – insert a five rupee coin hold on to the handles on the side and it will do the rest. Well for those who are prone to think that it is the solution to all of our health problems – you are wrong. It is not. Like all good things there are some exceptions to our cure-all gadget – it cannot be used by women in menstruation, pregnancy, menorrhagia, those with “infectious Skin Dissases [sic]”. Besides, the ones with metal implants, pace makers, those suffering from cancer, TB, malignant tumours (in fact, those who had not come to know of the wonderful effects of this well in time) cannot be cured and are specifically barred from using it. Again, those who have consumed alcohol are also on the barred category (perhaps because it may bring down the intoxication levels and you know how alcoholics are – they may ask for their money to be returned and compensation for the money they spent on drinks too!). 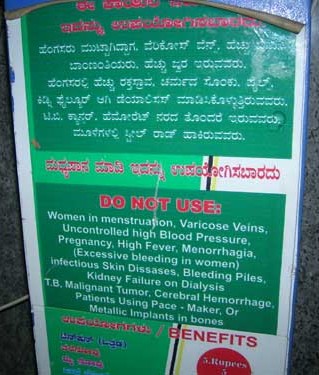 Last heard of, the railways are planning to buy these machines and close down their hospitals. They are also planning to install one at the Railway Minister Didi’s house to keep her in good health. Well, I plead guilty. My interest in this machine and the taking of photographs got one person interested in it. He frantically hunted for a five rupee coin which was finally given to him in exchange for loose change by the waiting room attendant, clutched the handles inserted the coin and waited for the miracle to happen. When the process was over, I mustered the courage to ask him whether he was relieved of anything. He said, “I don’t know about any other things, but I was surely relieved of my five rupees!” 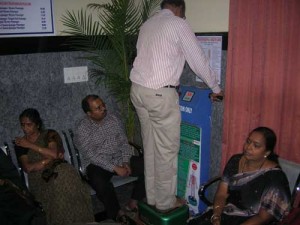 Regarding the more serious issues, the question is should the Indian Railways promote such dubious gadgets on their premises? Is there no accountability for such claims? Such claims are an offence under the MRTP act (now defunct), The consumer protection act (still in force), the drugs and magic remedies objectionable advertisements act and a number of others. The Railways, who claim to enforce a number of regulations designed to prevent customers from being cheated, should pay attention to things such as this as well.