Have a look at the following headlines:

All these separate incidents have one theme in common – intolerance. In society, by and large the level of intolerance is going up. My contention is that this comes from the attitude that one is always right and therefore all others must be wrong. Anyone professing views contrary to that of one’s own should be ‘dealt with’ at all costs and by all possible methods. It is not just the saffron gang or the green gang that is responsible for this sort of thinking. The trait has become common to all sections of the society. It is just that the saffron and green groups are the most vociferous and violent. Moreover they are well-organised and funded too.

As far as politicians and political parties go, they think that once a person enters the field of politics, he/she is invincible. Similar intolerance was displayed by a Minister of the Karnataka Government who manhandled an ordinary citizen for overtaking his car! In the month of August we had a press conference at the press club of Madikeri. We were asked about the so-called miracle of the Kaveri river gushing out on a particular day. I replied that we did not know how it was happening and would be glad to investigate it if given permission to do so. This statement was published in the newspapers the next day. It was followed by press releases from little-known organisations that threatened us with prosecution for ‘hurting religious sentiments’. Though more than a fortnight has elapsed since, nothing seems to be forth coming. Our society has reached a stage where one cannot question the origin of a river without ‘hurting religious sentiments’!

As for the professor in Kerala who had his hand chopped off recently by Islamists, the pivotal factor was the name of a person involved in an imaginary dialogue. It happened to be that of the Prophet of Islam. What was totally forgotten was that there are innumerable Muslims with the same name all over the world, and any one of them could have been the subject of the quoted conversation. More surprising was the attitude of the management of the college where he was working. He was placed under suspension, and after having had his hand chopped off by zealots, was also dismissed from service. The management claimed that they were obeying the law of the land. The state Government, though aware of the threat, did little to protect him. It was because they too had an eye on the vote-banks of the so-called minorities and did not want to displease them. 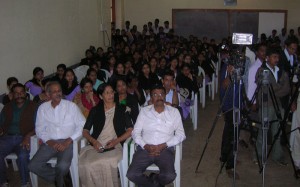 Field Marshal Cariappa college at Madikeri: Office bearers of the newly-formed Kodagu district Rationalist Committee are in the front row, including the president, Dr. Ganpathi

On the issue of rights of minorities, these subjects are only raised in places where the minorities are not in sufficient numbers to influence the electoral results. For example, in Karnataka where the ruling party being a votary of Hindutva has passed a bill in the assembly banning cow slaughter, the minorities have risen in anger and have realised that their rights to consume the meat of their choice have been infringed upon. But they hardly bother about the rights of those who want to consume pork; one may recall that this meat is haram for the Muslims!
The same people who raise the issue of the hijab in countries like France that wants to ban them, forget the atrocities done by the Taliban in the name of Islam. Again, the very same Hindu right-wing which threatens others on the charge of ‘hurting religious sentiments’ at the drop of a hat and shouts from roof-tops that the minorities should respect the sentiments of the majority, litigates for minority rights in countries where Hindus are a small minority. One may recall the results of one such litigation in which a Hindu settled in England and having become a British citizen wanted to be cremated open-air. It was no matter to him that it would hurt the sentiments of the majority there. Again when he won his case it was shouted from the roof-tops by the very same people who talk about minorities respecting the sentiments of the majority here. Again, the so called minorities who club together here are at each other’s throats elsewhere, where they are the dominant ones.

One does not hesitate to quote science either in promoting religious hatred. The Kangaroo courts, going by the name of ‘KHAP Panchayaths’, have quoted books on genetics for opposing marriages within the same gothra. They have conveniently forgotten that there is more in common genetically between maternal first cousins who do not have the same gothra and can hence marry without any objections from the Khap. In South India, marriages between first cousins on the maternal side is quite common, and among some communities the uncle marries the niece. If the Khap panchayats are so keen on avoiding inbreeding they should promote inter-caste marriages, since the possibilities of finding common deleterious genes is far less there. But they are more opposed to these, and in fact have served to enable the murder of those who have married outside the community. They have also hailed the murderers as heroes, rallied behind them, and even collected funds from the community for their defense. The opportunistic political class has kept mum about this outrage and some have even come out in support of these atrocities.

The rise of intolerance has resulted in a situation where everything is dictated by the self-proclaimed spokespersons of a particular community. In an incident that took place near Mangalore, a boy who was accompanying two girls was attacked by a gang under the suspicion that he was a Muslim. It turned out that he was not, but the reason quoted for the attack was that he was wearing a t-shirt with an Arabic inscription on it! Similar is the case of a lady teacher near Kasargod who refused to wear the Burkha and was attacked by members of
her community. She had to move to the High Court, which ruled in her favour, and has now been given police protection. In this country, the self-proclaimed spokespersons of a community can pass rules that infringe upon one’s fundamental rights and get away with it. When such is the situation in a secular, democratic country like ours, one can imagine what happens in the countries that profess a particular religion. In one such country, one person dared to ask a question to the self-styled propagator of “science in Islam”- Dr.Zakir Naik. The questioner was branded an atheist, and of course one can guess what the punishment would be. He was found dead, apparently by hanging himself at his place of work, where he had faced tremendous pressure from Islamists. There are recent reports in newspapers that some young people in Pakistan have rejected god and have declared themselves to be atheists. One cannot imagine what would happen to them in that place where Mullahs dispense justice in their Kangaroo courts. 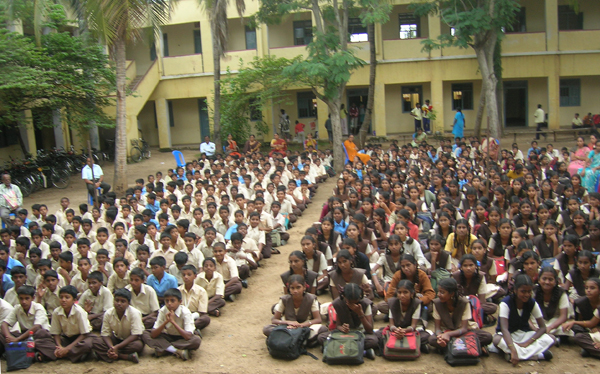 Are we too heading in the same direction? Are we going to have inquisitions like what the Catholic Churches used to do in the Dark Ages? Last month I was told by a professor of English in a college at Konark- “we have tolerated you enough”. When I asked him who that ‘we’ stands for, he said, ‘we Hindus’. When I asked him who had appointed him as the spokesman of the community, he told me to go to Saudi Arabia and say what I want there. I had to tell him that he better go there and build a temple. He was furious. I told him that I am a citizen of India and have every right to have and express my views. Then I had to remind him of his Western attire and his teaching of a language from the West, and he flew into a rage. If this is to be the attitude of a college teacher, one has to wonder how the less-literate people would react? Or would it be that they would not react this way since they have not been brain-washed by our so-called education? Only time will point out the direction we are headed in- a 16th century mind-set superimposed on 21st century technology, or a liberal mindset with the latest that technology offers us.

Are we heading for a mob rule? Are we going to have kangaroo courts dispensing justice presided over by rabble-rousers, or a proper judicial system as laid down in our constitution? It is for us to decide. I would like to quote Justice M.N.Venkatachaliah, the former Chief Justice of India:

“We are moving from a constitutional democracy to one that is populist. It wont be surprising if we move to mob rule.”

Professor Narendra Nayak is the president of the Federation of Indian Rationalist Associations, and he writes about interesting events that he comes across on his rationalist tours of India.