When most people hear the term ‘Alternative Medicine’ they tend to think that it is used to describe something that offers a tested, tried alternative to mainstream systems of medicine. In India we have three types of systems of treatment and diagnosis- the recognized evidence based one – the scientific system, the recognized but not evidence based ones under the acronym AYUSH- Ayurveda, Unani, Siddha and Homeopathy, and the third has a list that is almost never complete but contains common ones like electrohomeopathy, reiki, pranic healing, aromatherapy, music therapy, gem therapy, etc. The term ‘alternative medicine’ perhaps describes best the last class. (Note: Technically all those systems of treatment and diagnosis that are not science-based are designated as ‘Alternative Medicine’, but in the Indian context there are three categories because of the government’s endorsement of AYUSH.) The third class labeled ‘Alternative Medicine’ in India seems to be the favourite hunting ground for quacks of all types.

The scientific system of medicine is popularly known as ‘allopathy’ in India, a term that was coined a long time ago by the inventor of homeopathy, a German called Hahnemann. Outside of India the term ‘allopathy’ is rarely used today. In the early 20th century Hahnemann proposed that minute doses of the very same substances that cause the symptoms of a particular disease in a healthy individual could cure that disease. This he called homeopathy. Since the other system of medicine prevalent at that time claimed otherwise, it was called as allopathy or the other. At that time this system of medicine involved treatments like purging, bleeding, leech therapy, injections with toxic substances etc. The side effects of these were so unpleasant that the patient many a time would be better off without the treatment! By contrast homeopathy involved treatment with sugar pills and tinctures whose active ingredients, if any, were milk, sugar and ethanol respectively. None of these could be harmful to normal people unless they were lactose intolerant! That explains why homeopathy became very popular! Those were times when no treatment at all was often better than drastic treatment and the mortality rate was higher after treatment with the remedies described above under allopathy! Nomenclature apart, it was this system that developed into modern medicine, as it was not based on any irrefutable dogma and is subject to self correction (the scientific method). Things that were the norm at one time got discarded when more sophisticated investigative methods showed that they were not desirable. Innumerable such examples can be given for these. For example, laxatives which were prescribed at periodic intervals to all for cleaning the alimentary tract are now no longer used unless it is needed for surgery or radiography. At one time infection with malarial parasites was therapy for syphilis etc. Once evidence to the contrary came up or less harmful methods of treatment or more efficient drugs were discovered, the older were discarded and consigned to the dustbins of history. Methods of diagnosis and treatment are not based on some individual’s idiosyncrasies but on methods of science. This system absorbed many things from other systems of medicine and knowledge grew.

On the contrary the so-called ‘alternative systems of medicine’, many of which cannot be called medicine by any stretch of the most fertile of imaginations, are based on hypotheses unsupported by any evidence. They are based on presumptions of certain individuals, pseudo scientific assumptions and unsupported claims. They also peddle unproven remedies, devices and books of dubious claims. There are arguments that these are very inexpensive, but the facts prove otherwise. In quack ‘therapies’ like aroma ‘therapy’ small phials of perfumes are sold at exorbitant prices. While one may claim that there are more expensive perfumes that are no problem if a perfume is sold as such. One can decide whether one wants to purchase them at the quoted price. But, when it is claimed as a curative, evidence is needed, which is never forthcoming. Most of the time the so-called evidence offered by these proclaimers of alternative medicine are testimonials from well known individuals, and are nothing more than anecdotal. 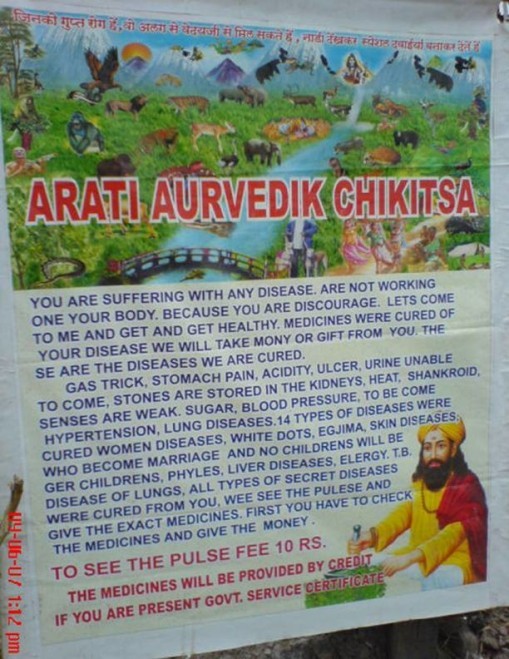 Many countries have very effective laws to deal with these so called alternative systems. If any one claims that their concoction, device or incantation can be used as treatment for any disease, it is up to them to show scientific studies as proof. The governments in these countries also have rigorous testing standards. If one fails they are subjected to heavy penalties including imprisonment. This is why many peddlers of such nonsense are limited in their activities in these countries. Some of the Indian peddlers of such concoctions remain silent about their claims in such countries, but some of them pitch their products calling them nutritional supplements made from edible ingredients! Some of them cannot be sold as such either, because of the unacceptable levels of toxic metals and such! But, in our country these people are lucky, though there laws such as the Consumer Protection Act, the section under unfair trade practices of the MRTP act and the Drugs and Magic Remedies (Objectionable Advertisements) act. The peddlers of these dubious concoctions and quack remedies manage to get away through various loopholes such as claiming them to be traditional remedies, or under religious freedom etc. Sometimes the advertisements are so cleverly worded that it is very difficult to pin them down. Under many of these only the affected parties can complain or go in for litigation, which they are loath to. These are so rampant that even a Supreme court judgment has not affected them. In 2004 the Supreme court of India passed judgment on more than a dozen so-called systems of medicine, stating that they have absolutely no scientific basis and should not be allowed to be practiced as systems of medicine. These include, in addition to those already mentioned above, things like magneto therapy, gem therapy, color therapy, urine therapy, etc.

Again the term ‘therapy’ is very vague term! So, a hotel could call itself as an Institute of Nutritional Therapy. There are some calling themselves Naturopathic Hospitals and the practitioners as Naturopathic Doctors. If nature itself can heal, why are these so called therapists needed?! One can get a certificate for many of these quack therapies from degree mills offering these and then call themselves as therapists and prefix Dr. to their names! I can always say that I am under treatment for breatho therapy and every day get my therapy from the Institute of Nutritional Sciences round the corner( of course a fancy name for a restaurant!). A barber could call himself a Tonsorial Therapist (the surgeons used be those long back and that is why the surgeons have the title Mr. in England!) and so on.

How do these alternative therapies gain legitimacy? One reason is their ads and programs on TV channels. We can see many of these so called specialists on TV channels- the cancerologists, the kidneyologists, the sexologists and so on. Of course the terminologies I have used for these so called specialists is deliberate, as the respective specializations are called different names among the properly qualified practitioners. Then we have people with respectable qualifications endorsing such quacks. Once I remember a professor of medicine who was also the Dean of a Medical College inaugurating the asthma relief camp of a steroid quack. The very same person who went on to become the Vice Chancellor of a deemed university also presided over a convocation of a quack and handed over degrees to other quacks. The quack who was the leader was hounded out of Mangalore and is now pursuing his quackery at Kolhapur, I am told! Some of the qualified people treat patients referred to them by such treating them as if they are their professional colleagues. One thing that has to be admired about these alternative medicine guys is their gift of the gab! Their bedside manners and their use of pseudoscientific jargon could put any genuine specialist to shame! Their easy accessibility and their flexible terms of payment, money back guarantee and such attractive qualities are another plus point.

Why does this so called ‘alternative medicine’ work sometimes? As any honest general practitioner will tell you 80% of the patients have some self-limiting disorder! These patients will get cured whether any treatment is administered or not! It is the main task of the family doctor to decide whether you need specialist treatment or not. This doctor also prescribes palliatives so that the symptoms become manageable.

So, that raises the question as to how safe is it to go to these quacks? One has to remember that without proper training these people are in no position to determine which disease/condition falls in which category. Again, they refuse to admit failure and go on administering different things about which they have little knowledge and/or training. Some diseases that can be cured in the starting stages become untreatable later, like cancer for example. Some emergencies require immediate treatment- conditions such as acute abdominal pain, internal bleeding etc.

Remember, there are no alternative lives and there is no alternative to good health. Keep this in mind when you think of something like alternative medicine. Again, keep in mind that a color therapist will not go to a gem therapist when he is ill! He will go the nearest qualified specialist in scientific medicine with all the latest gadgets and drugs! To hell with the alternative treatments! As a wag remarked, let us see a music therapist treat an aroma therapist or vice versa!

Despite of all the shortcomings that can be blamed on to evidence-based, scientific medicine- it works better than pseudoscientific ‘treatments’, and it is based on sound evidence and peer reviewed scientific studies. It is not based on any one individual’s untested hypothesis or divine revelations or testimonies of individuals. It changes as new findings emerge, always subject to self-criticism and peer review. In fact, most published scientific work is comprised of reviews of past methods. More importantly science-based medicine changes and does not crow about the good old times when every thing was so good and everyone was so healthy. It does not have any unquestionable central dogma.