Uttar Pradesh (UP) is the most populous state in India and is known to be one of the most backward too. In National politics it is always said that the party that comes to power in UP will eventually rule the center (a bellwether state, as they say in the Uniter States). It is hence necessary that a strong rationalism movement is built up in UP if a national level impact is to be effected. 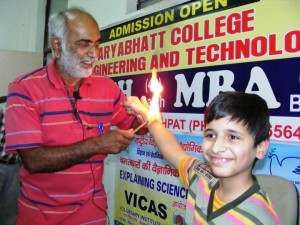 We have been trying this for a long time and have developed contacts with a good number of affiliated organisations and committed individuals from this state. But what is needed is a presence in all the districts and an effective network of dedicated workers. Through organisations like Arjak Samaj, which has thousands of members, and the Social Development Foundation which also has many dedicated workers, we have been trying to create a network in this state. Premanand had conducted training programs here two decades ago and a few volunteers who could explain miracles were thrown up. There are some activists who have learnt the tricks and have been performing and explaining them on their own. But to develop a rationalist movement we need much more. We have been struggling to develop a network which would be broad based as well as active, but we have not succeeded so far. 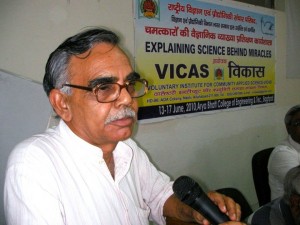 After Premanand’s first workshop in the 1990s in Lucknow, a few of the trainees developed their skills, and have now started training others too. But there have been a lot of limitations for them. I too have conducted a number of training programs in various places, but the impact had been very, very minimal. In terms of social development, this state ranks somewhere near the underdeveloped countries of sub Saharan Africa. Although it has contributed more than half of the Prime Ministers of the nation and great national leaders like Jawaharlal Nehru, Lal Bahadur Shastri, Ram Manohar Lohia etc., the situation has not improved. The people of this state are very superstitious.

So, last year when Dr.S.K.Singh, the director of the Voluntary Institute for Community Applied Science (VICAS) told me that he had applied for a grant from the NCSTC for conducting four training programs to cover all the 60 plus districts of this state, I was very happy and thought that we could use this opportunity to build up a good network here. After eighteen months of work, I am glad to announce that we have made a start that appears to be quite promising. 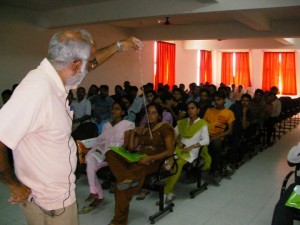 The first training program, catalysed by the NCSTC and conducted by VICAS, was in Allahabad in the month of January, 2009. We had a training program for thirty activists who had come from around 15 districts. It was for five days and it went on quite well.

At that time we had a fire walk on the banks of the Yamuna river which was filmed by a number of TV channels and we got some of the best footage we ever had of this event. Impressed by this, one of the channels called Sahara Samay invited me to their studio for a live phone-in program. Although we had some publicity, it did not make a great impact.

Some of the trainees for that program have been active in the field but even there the program is projected like a magic show or an entertainment program and not as a means to develop scientific temper. Then, after about a year, the same organisation contacted me for a series of training programs in the same state. This time they were organised in Lucknow, Allahabad and Baghpat. To each of these, around thirty activists from various organisations had been invited. The training programs were to start from the 1st of June and end of the 17th. After these four programs we would have covered all the districts of the state in terms of training activists from each of them.

First of the series was held at the Youth Hostel, Lucknow from the 1st of June. The number of participants was around 25. But we made an impact on the media persons who had come to cover the event. There were a number of reports in newspapers and the training program went on reasonably well. 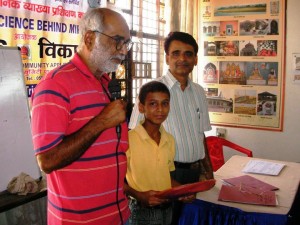 One of the reporters who had come to cover the event was the Bureau Chief of the India TV channel of Lucknow. She was very impressed by our work and invited me to their studio for a live program on the 5th of June . That program started at 7 pm and went on to 9.30 pm. There were other participants who were at the Delhi studio. A considerable amount of time was devoted for our exposure of the so called miracles and that program made a huge impact via the media.

On the next day I went to Allahabad for the next training program and by that time the media was ready. We had about thirty participants here though the number went up to forty in the next few days. Many were those who had read about it in the newspapers and wanted to learn things. We had to tell them that they could be only observers and were not eligible to use any of the other facilities like lunch. However some of them expressed great interest and took part. 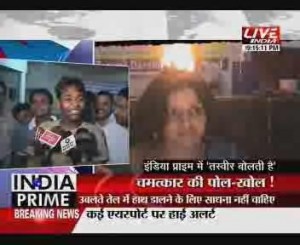 It was at Allahabad that the media really started taking interest in us! I was invited to the studio of the Sahara group and went on air at 4 pm on a channel called as Sahara UP – Uttarakhand. On the same evening, at 6pm, I was invited live on another channel that was part of the same group, called as Sahara Samay. After the hectic activity of the day, when I was relaxing, there was a phone from a channel called Live India TV. The live program was supposed to be for 30 minutes but went on for an hour. As soon as the program was over I was invited to come on the very next day to Delhi to their studio for a live program there. I had to refuse as I had my training program to look after.

The next day i was to go to Baghpat for another 5 day training program and there was a free day in between the two. But, the channel was so insistent and they sent someone to meet me at the railway station at Meerut where my journey from Allahabad to Baghpa was supposed to end by train, and I was taken to Delhi for a live 2 hour program. During this presentation, I was helped to a great extent by Mr.Pramod of VICAS, Allahabad, who was helping me with the training too.

I think that that live program was the real turning point. We started getting calls from dozens of TV channels asking for where our next program would be and what it would be. Many of them came to the place, Aryabhatt College of Engineering and Management, where our training program was going on, and one of them wanted a live program in their studio. 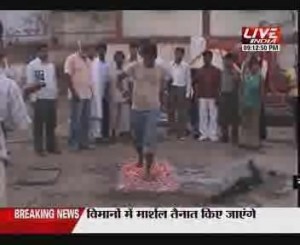 That channel was India TV and we went live on a Sunday at the prime time-9pm. In two days we were to perform some of the very sensational ‘miracles’ like getting buried underground, removing fried things from hot oil with bare hands, preparing tea with fire on the head etc. It was a great surprise to us that this program done on the 15th June was covered by 17 TV channels including 2 live!

Those who were covering it live had brought their OB vans and were waiting for the events to happen. The print media gave us wide coverage with some of them making features and half page write ups. It also helped that two girls who had come for the training, Sanju and Anju, were bold enough to get buried for 2 hours and then come out and walk on embers! 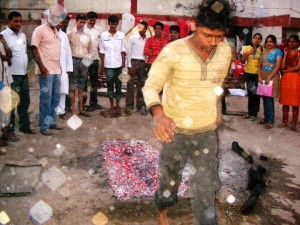 The UP programs were the most successful to date as for as the media coverage was concerned. The organisers of the Training program VICAS and the department of the central govt, the NCSTC were immensely pleased with the results and we are sure of their co-operation in the next training programs. In fact we have lined up a lot of programs for this state. We propose to have district level training programs first and train activists from all over the district and send them to the field to convey our message of scientific temper to the people. I plan to go with the team for a few of these training programs and then let them continue the process. During these programs, those who have been already trained by us will also take part and help in the process. After about a year of developing activists, we plan on building a state-level organisation whose task shall be exclusively devoted to the spreading of our movement and educating the people about the need for scientific temper.

In this part of India it is very necessary to create a spirit of enquiry and scientific temper among the people. We hear of so many atrocities and dangerous superstitious practices that it would need a whole life time to just make a list of them. The large population, lack of medical facilities and superstitions put into the minds of people from a very young age make the states of Bihar, Madhya Pradesh. Rajasthan and Uttar Pradesh the most backward in India. Unless we build up strong movements there to go to the people and develop their critical faculties, the nation is not going to progress. 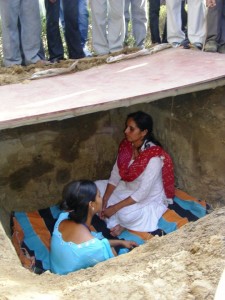 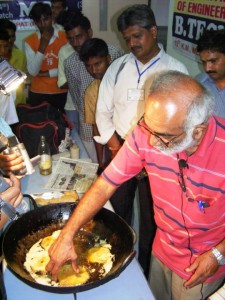 That is one of main reasons why the Federation of Indian Rationalist Associations has decided to focus on these states for the coming years. We have already managed to start one such in Bihar called as the Bihar Rationalist Forum. We hope to start one in Uttar Pradesh too within a year. That would mean that we have managed to cover the two most populated states of our country and probably the most superstitious too.

How the movement develops in these states shall be a pointer to how it is going to fare in the rest of the Hindi belt. While we have a presence in Jharkhand and Madhya Pradesh we are yet do develop in Chattisgarh and Rajasthan. We have to bring these states too into our ambit as soon as possible.