Bihar is one of the largest and most populous states in India. It also happens to be the most backward. However, the state has had a relatively glorious past. Bihar is well known for its intellectual achievements right from the time of Buddha. Mohandas Karamchand Gandhi started his freedom struggle from Motihari in this state. One of the most well known movements of the post independent India against the authoritarianism of Indira Gandhi was started by Jayaprakash Narayan who was a Bihari.

In spite of such a progressive history, Bihar has become a state riddled with superstitions and obscurantism. For the past five years we have been associated with running a campaign in Bihar to inculcate scientific temper among people. It all started when a Minister of State for Science and Technology of the Government of India and the Member of Parliament from Navada, Sanjay Paswan, honoured tantriks at a public ceremony.

His claim was that these people have extraordinary powers and they can do things like walking on embers, catching snakes with bare hands etc., and hence needed to be honored for those achievements. The director of the Patna planetarium had invited Premanand to his institution to conduct a training program to debunk these claims.

During this program Premanand met Prof. S.P.Verma of Science for Society, Bihar, who invited him to conduct this program for his organisation. This was for the Year of Science Awareness program. Next June, Premanand wanted me to go along with him for the training program in which people from each of the districts of Bihar had participated.

Prof. Verma wanted to follow that up with a tour of Bihar to visit each of the districts and conduct programs there. But at that time, Premanand was not well and he wanted me to go on tour by myself, which was the beginning of the relationship with this organisation. They have a presence in each of the districts of this state, and a well knit network of workers, sympathisers and good organisers.

They are also members of the NCSTC Network and conduct the Children’s Science Congress each year at the state and district levels. This organisation, the Network for Science and Technology Communication, a section of the Department of Science and Technology under the Ministry of Human Resource Development has been a major catalyst for the development of our movement in the country. They have sponsored a number of miracle exposure training workshops which have been conducted by Premanand and now by me during which we have had the opportunity of meeting and training hundreds of activists many of who have later on joined the movement.

Though the Year of Scientific Awareness was over, the relationship continued and the movement grew. We had a number of programs going on with funding from various sources and sometimes even from personal funds. That led to the identification of a number of activists, organisers and those interested in the movement. We all felt the need for an organisation which can and should take up issues related to scientific temper without fear or favour.

The existing organisational set up had a few problems with projecting vehement stands on many issues, as it conducts a variety of activities of various types involving a large number of people. Taking radical stands on issues would alienate some of them and result in affecting these activities. The proposal to start such an organization was a discussion point between us for quite some time. This April we had a round of training programs covering almost all the districts of Bihar, and we have identified some of the activists who could be involved in building up this movement. In order to bring them together we decided to hold a meeting on the 20th of June, 2010.

The meeting was held at the department of Chemistry at the Patna University. There were about 35 members from about 12 districts. Although the distribution was not uniform, the fact that this number attended was quite encouraging. The meeting was initiated by a discussion on the need for such an association and the ways to go about it. There was good participation from the members present who presented their view points and ideas. In the morning session it was decided that the formation of such an organisation was necessary.

The post-lunch session started with the discussions about the type of organisation to be started. It was decided to defer this decision of the type of legal entity to be formed until a larger and more representative body could be formed. So, it was decided to form an ad hoc committee and it was named Bihar Rationalist Forum. This organisation would work to strengthen the rationalist movement in Bihar by its various activities. 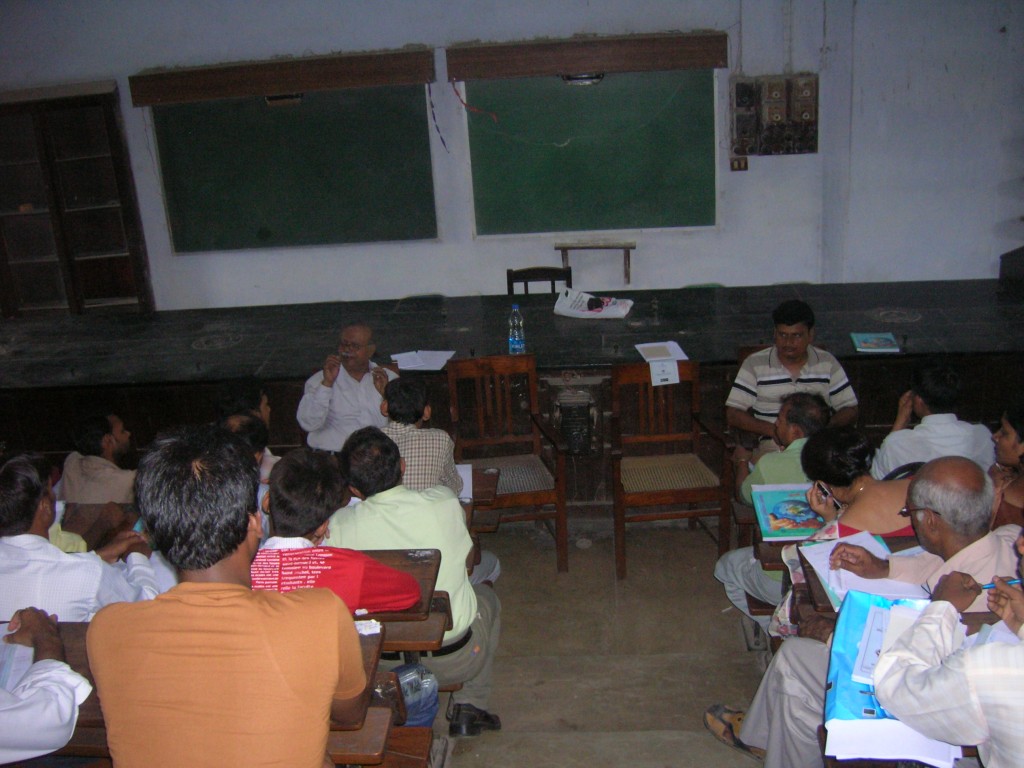 The following were the resolutions discussed and passed:

1. To affiliate the organisation to FIRA.

2. To constitute committees for the following:

a. A panel of those who would demonstrate so called miracles and explain superstitions.

b. A panel of experts who would investigate and explain paranormal phenomena.

c. An academic panel of experts in various fields who could answer queries of the members about the paranormal.

3. We also decided to conduct seminars, workshops, and discussions to expand the horizons of knowledge of the members and also those interested.

4. To bring more interested, committed and dedicated people into the movement and also to create a state wide network with members in all the districts.

A managing committee was elected from among the members present. The ad hoc office bearers were also elected. The following is the list:

Prof.S.P.Verma was requested to be the mentor and he readily agreed. The President of FIRA was invited to be the patron and that too was agreed upon.

The number of young people, women and activists gives us the hope that the movement will go forward in the right direction and address the target membership.

It was also decided that the next meeting of the ad hoc committee would be held at Hajipur in September and hosted by the president Ms. Seema Singh. The members present also contributed to the funds of this forum and the president also handed over the contribution on behalf of FIRA.