Long before the arrogant West coined the term “pseudoscience”, the ancient Indians already knew about it. It is an art that is inherent in the self and manifests through inner pro-activeness, yogic leverage and spiritual actualization. Unfortunately, the modern mind which has been corrupted by western thought, cannot comprehend the sublime supremeness of the ancient art. So I, who is dubbed “Sri Sri….∞ ” Anantananda Swami, will explain the divine art in modern terms, using the science of Gayatri Mantra as an example.

The Gayatri Mantra is a primal force in the Universe. The scientific nature of it has been explained by an ecstatic soul sometime back in the incoherent past. Allow me to demonstrate how the art of pseudoscience was put to use in the creation of that exalted piece of literature.

Step 1: Start with the stating of known facts. Here they are about the stars and planets of the Milky Way galaxy: 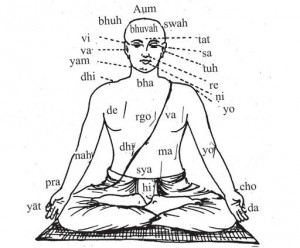 Step 2: Make a subtle transition from the logical to the illogical:

Bhur the earth, bhuvah the planets (solar family), swah the Galaxy. We observe that when an ordinary fan with a speed of 900 RPM (rotations Per minute) moves, it makes noise. Then, one can imagine, what great noise would be created when the galaxies move with a speed of 20,000 miles per second.

The statement that a fast rotating fan makes some noise is a fact. But that happens only when there is a medium to conduct sound. If a fan rotates in vacuum, whatever its speed be, there will be no sound. By ignoring the fact that sound needs a medium to propagate, the author has subtly made a transition into the illogical by stating that a rotating galaxy also makes a sound implicitly assuming that it propagates through vacuum.

Step 3: Now that the illogical has been established as a fact, use it to declare a truth:

This is what this portion of the mantra explains that the sound produced due to the fast-moving earth, planets and galaxies is Om. The sound was heard during meditation by Rishi Vishvamitra, who mentioned it too their colleagues. All of them, then unanimously decided to call this sound Om the name of God, because this sound is available in all the three periods of time, hence it is set (permanent).

Step 4: Spice it up with more scientific sounding terms and some non-sequiturs:

This sound Om heard during samadhi was called by all the seers nada-Brahma a very great noise), but not a noise that is normally beyond a specific amplitude and limits of decibels suited to human hearing. Hence the rishis called this sound Udgith musical sound of the above, i.e., heaven.

They also noticed that the infinite mass of galaxies moving with a velocity of 20,000 miles/second was generating a kinetic energy= 1/2MV2 and this was balancing the total energy consumption of the cosmos.Hence they named it Pranavah, which means the body (vapu) or storehouse of energy (prana).

The earth (bhur), the planets (bhuvah), and the galaxies (swah) are moving at a very great velocity, the sound produced is Om, (the name of formless God.) That God (tat), who manifests Himself in the form of light of suns (savitur) is worthy of bowing / respect (varenyam). We all, therefore, should meditate (dheemahi) upon the light (bhargo) of that deity (devasya) and also do chanting of Om. May He (yo) guide in right direction (prachodayat) our (nah) intellect (dhiyo).

There it is. A holy-five-step-program to make anything sound true. It is guaranteed to bring you joy and happiness and more importantly, money. Interested souls can prostrate before me and I will teach a much more potent form of that art.

Discuss this article on our forums here.