The political space in India seems to be as large as the country itself. We have parties advocating everything from communism to capitalism, Hindutva to Islam, though not publicly, since the constitution prohibits it. We have the Manuvadi parties, the Dalit parties, parties of the OBCs, parties proposing an atheistic government and so on. Into this cacophony a new entrant has arrived, throwing his hat into the ring! All beware, the incorruptible, the squeaky clean, unmarried, physically fit superhero is here- step aside all, here is the man for whom the country has been waiting since independence- the messiah has finally arrived on the scene. Ram Kishen Yadav, aka Baba Ramdev who keeps churning his abdominal muscles on the stage, thumbing his nose at people and collecting millions in the name of yoga. If one watches his TV program one can see him jumping about, performing contortions, panting for breath, and as soon as he gets it back, uttering platitudes about everything under the sun,moon and stars!

He has simplistic solutions for all problems. Want to solve the poverty problem? Bring the money stashed in Swiss banks. Homosexuality is a disease and the cure for it is yoga. Its not one or two things that he talks about but, as previously said, he has an encyclopedic knowledge about all matters. He is a text book on medicine, surgery, nutrition, physical exercise, psychiatry and whatever one may need. Do you have a problem? Perform kapalbathi and pranayam. He talks about the good old days, lecturing about the skeleton of a 12 feet tall person discovered at an undisclosed location, and how the good food and clean air back in those days made them grow that big. To hell with medical evidence indicating that a 7 feet tall person can find it difficult to live a normal life because the human body has its logical and mechanical limitations.

It has been a long climb to the top indeed for a contortionist to develop into a guru with solutions for all the problems facing us. He wants to start with India and make it the healthiest nation in the world. Then he wants to go out and do the same to the rest of the world! When he predicted several years ago that there would soon be a cure for AIDS, obtained from a combination of ayurveda and yoga, Ramdev got into trouble with a Health Minister from the central government who asked him to prove his claims or shut up because such talk could disrupt the campaign for the prevention of AIDS. Ramdev then gave a long-winded explanation for what he actually said, claiming he had been misquoted.

In his TV shows he has patients barging in with so-called ‘medical reports’ which he reads out in a halting manner, mispronouncing many of the medical terminologies. It runs like this: A middle aged lady goes to the stage with a report, which he reads out loud. Then he says- “Well, well what did the doctors say about this?” She answers- “Baba, they told me I would die in six months. Another dose of sarcasm- “Then you had to die”. She- “No Baba, I did not I started doing yoga and now I am fine”. He- “So, this is modern medicine for you, in the grip of the multinationals!” Then another round of contortions, heavy breathing, devotional songs etc. These are called as yog shibirs. On his stage are a few younger people doing the very same poses which he asks all people to do.

He has one more collaborator who goes to gardens, fields or anywhere that has greenery and brings back all sorts of leaves and plants. Ramdev holds lectures on these, listing their botanical names and dishing out advice on what they can heal and/or prevent. Of course, no sort of evidence or clinical trials are needed. You just have to take his word for it. The only proof that is offered is that our ancient texts say these things. When the swine flu epidemic hit the world he had a solution for it- boil a particular root in water and drink its extract to prevent the flu. The prices for that root went through the roof and no one was willing to listen to what we said- that it was like any other type of seasonal flu and would pass off. Now, the statistics has vindicated our stand. Of course, he can claim that it was his combination of yoga and ayurveda that saved India.

What about his “medicines”? People have to sign an undertaking saying that they knew the “medicines” were not approved, to absolve him of any liability for any possible ill-effects arising from their use! He manufacures them at facilities which employ sweat shop labor. When they went on strike demanding fair wages, he set his goons upon them. When the trade unions of the left parties supported laborers and exposed the formulae of some of Ramdev’s concoctions, he made his usual allegation that they were tools of the multinationals. He was adding human bones to some of the “medicines” after powdering them; he defended this by saying that it was permitted in ayurveda. There are many such controversies about his panaceas, which are very, very expensive. The same allegation of exploitation that he makes against the multinationals is equally applicable to him, if not more! At least their products are based on evidence and clinical trials while his concoctions are marketed on his word alone and the claim that it is a truth found in ancient texts.

Ramdev’s hypocrisy needs to be pointed out here. On stage with a captive audience, he launches into tirades against the ‘corrupt’ politicians. But nothing prevents him from hob-nobbing with them, traveling with them on state helicopters and utilizing millions of rupees given as ‘grants for research’. He conveniently forgets that this money comes from the pocket of the tax payers, 300 million of them being malnourished, poverty stricken and with naturally flat stomachs caused by the years of malnutrition, and hence not impressed by his contortions on stage.

Well, who exactly is Ramdev?

If one looks at the audience at his sessions- for which one has to pay huge donations despite his talk of egalitarianism- the fat cats who pay heftier ‘donations’ are located close to the dais and are given more elbow room to carry out their maneuvering. The others have to lump it out far away from the stage, performing their contortions in cramped conditions. That is equality for you. As George Orwell said, all animals are equal but some are more equal than others. That is applicable to the disciples of Ramdev as well. But, for the over weight middle class with their sagging bellies, Ram Kishan Yadav is fitness personified. They want easy solutions to their problems; they would like to have toned bodies, full hair on their balding pates and, in short, quick and easy solutions for all their problems without having to work hard. His yoga classes look like the easy solution that these people seek. That is why we see the tension-ridden middle classes flocking there. Some exercise may work for some of them and these people shout it from the roof tops. Those for whom the exercises do not work, constituting the larger group, will be silent like they are expected to be – the silent majority! Again, he is very clever when offering advise to patients with serious problems; if they have diseases like cancer they will be told to continue with their therapy but also consume his concoctions and do things like pranayama etc. If they are cured he can take the credit- if not the money grabbing multinationals and the doctors can be blamed! In his much publicized ‘public’ debates with some of the branches of the Indian Medical Association, he cleverly wriggles out of tight situations by uttering cliches like you do your job and I will do mine. I recall a few similar instances, like when the Indian Medical Association branch of Goa ‘collaborated’ with him, having themselves photographed at his feet. When the national secretary of FIRA queried the office bearers as to why they were seen in such a position with a person who is opposed to them, the lame excuse was that they were just joining him for his anti tobacco campaign!

Why does this colorful personality wants to enter politics- or rather, why does he want to embrace the “dirty world of politics” as he says? It is 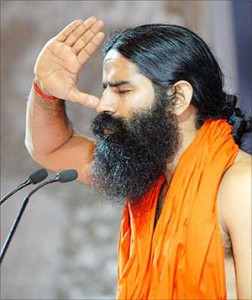 the desire for power on one hand and for safe-guarding his empire on the other? Huge grants have been taken for establishing ‘research institutes’ but nothing useful has come out of them so far. Under the right to information act anyone can ask for the details of this funding and also ask for the results. Once these scandals come out there is going to be trouble. Not everyone in India is fat and middle-class- Ramdev’s constituency! He wants to get at other groups of people, for which he needs a larger net. Another factor is the large amount of black money that he must have amassed marketing his useless concoctions. Despite of all his claims to egalitarianism they are really expensive- more expensive than the concoctions of the multinationals whom he derides, but at least the latter are required to be scientifically tested to do what they claim to! Ramdev has forayed abroad and purchased his own island from where he hopes to market these concoctions without the need to satisfy regulatory bodies about their effectiveness.

Ramdev wants to be the ‘C team’ of the Hindutva gang. The A team- the right wing Bharathiya Janatha Party- has undergone a decline in growth, becoming stagnant. The rabid right wing groups like the Shiv Sena that form the B team are divided and losing their appeal. There is a need for one more team with more appeal to a different constituency, and that is what Ramdev is trying to create! While decrying all politicians as corrupt, he does not mind sharing the stage with the likes of Advani and co. While mocking the Congress party, he is not averse to taking grants from states run by that party. He feels that he has an appeal to his community- though he claims to be a ascetic with no caste, he is a Yadav, a dominant caste in many areas of the cow belt. Again, the saffron robes and the halo of being a renunciate may influence the electorate into voting for his candidates, and he hopes to win seats and worm his way into ruling combinations. No sir, he does not want power. He wants to reform the nation! He will not contest for elections but will put up honest, sincere, dedicated candidates who will do the task of nation building. In other words he wants to be a remote control and play the king maker!

Coming to the great personality himself one wonders why the cure-all yogic and the ayurvedic concoctions that he peddles are unable to cure his ever-present facial tic. What yogic quality makes him dye his hair and beard? The vanity of the renunciate?Is he the Hindu version of Benny Hinn? These questions will be answered soon when he enters electoral politics which has an audience that is not quite as captive and will need contortions of a different kind.

Leave a Reply to Harke X