Here are some news items.

1. Nirmukta Forums- The Only One Of Its Kind In India: Nirmukta.net, our very own online discussion forum for the Nirmukta Freethought Community, was launched successfully last Monday, the 5th of April, 2010. Membership hasn’t sky-rocketed yet, but it is increasing steadily. These are the only privately hosted forums that deal exclusively with issues concerning the freethought community in India, as far as we know. Given the size of the country and the number of IT professionals that it produces, the potential for activism and community-building at these forums is all the more important.

There is one reason why we cannot rely too much on social media sites like Facebook, when it comes to our community-building. These sites

are not owned by the community or freethought group, but by large corporations that often pander to the lowest denominators in society by restricting freedom of speech and expression. That, and the fact that our personal information is likely to be kept more private when we use our own privately owned forums, makes this initiative an essential tool in our moving forward. A third reason is that Facebook is a terrible way to archive information. A forum, on the other hand, is much better at providing search results on google and at retaining retrievability if you wish to go back and dig up a conversation from years ago.

2. SEA-Atheists- Promoting Atheism In South-East Asia: We reported a while ago about the formatio

n of the South-East Asian atheists forums, labelled SEA-Atheists. Now they have a complete website, with separate pages for Indonesian, Singapore, Filipino and Malaysian atheists, agnostics and freethinkers. Friend of Nirmukta’s and key figure behind the initiative, Karl Karnadi, sent us this statement about the site:

” This website contains information about communities of non-believers in South-East Asia. Yes, non-believers: Atheists, Agnostics, Secular Humanists, Freethinkers, and with whatever name we choose, we are everywhere. From Islam majority countries like Malaysia and Indonesia, to the Catholic Philippines, and Singapore, we exist. Some of us choose to be open about our non-belief, some others don’t. To all of you non-believers, especially those who live in South-East Asian countries: You are not alone!”

3. Host Professor Narendra Nayak In Your City (Poll): Professor Narendra Nayak is the President of the Federation of Indian Rationalist Associations, an umbrella body consisting of more than 65 Rationalist groups in India. He has been travelling the country, conducting training programs, workshops, demonstrations and debunkings. He has been doing this work for nearly 30 years and is the official successor of Basava Premanand. Professor Nayak’s articles can be found here.

If you would like to host Professor Narendra Nayak in your city and learn from his extensive knowledge on issues that concern the freethought movement in India, visit this page on the forums and vote in the poll. If your city is not on the list and you’d like to have it added, please leave a comment here or on the forums under the thread containing the poll (linked to above).  While at the forums, please take a look around and consider participating in the discussions to help our community grow and become enriched. Last day for voting will be announced later this month. The poll will be open for about 2 months or so. 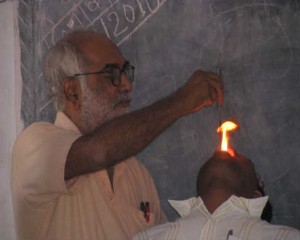 Narendra Nayak at a Recent Event