Note: This article is an update on this story reported earlier. The author is the president of the Federation of Indian Rationalist Associations.

Disclaimer: This report is about an allegedly paranormal phenomenon reported in media. The report is the result of the visit of a team of rationalists to the place where the alleged ‘miracle’ has been taking place. It is part of an attempt to investigate happenings, under the section 51 AH of the constitution of India which outlines the duties of a citizen. It is not an attempt to hurt anyone’s religious sentiments or cause any friction between any groups belonging to the same or different religions. The team consisted of officebearers of FIRA and KYS.

After the statues of Mary shedding tears and blood it is the turn of flex prints now! In the St.Mary’s Jacobite Chapel, Kattachira flex prints of Mary 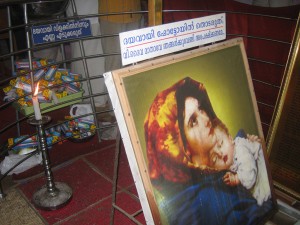 with Infant Jesus have started discharging an oily liquid with an aromatic smell. On the 6th March some of us had the opportunity to visit the place, after our request was acceded to by Mathew Theodosios Metropolitan of the Kollam Diocese, under which the chapel is located. It may be recalled that this so-called miracle had hit the headlines in a section of the media in Kerala around October, 2009.

On reaching the place, we were taken to meet with the cor episcopal Abraham Mannikarottu and his group of priests and devotees, where there were heated debates about the Kerala Yuktivadi Sangham’s campaign, matters of faith and various such issues. Finally at around 12.30 we were taken around the place by the cor episcopal and his group. What happened is as follows in the form of a statement issued to him. Our opinions are expressed separately. 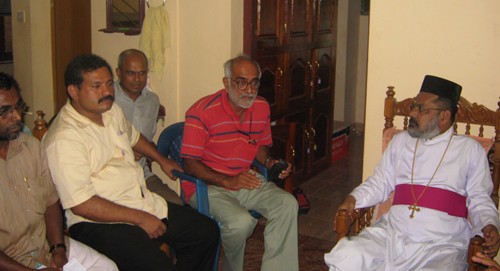 Relevant points of the statement issued to the cor episcopal

We were shown the following:

We feel that more investigations are needed to establish the source and nature of this liquid. We categorically state that we are not certifying the authenticity of the alleged miracle.

However, we thanked the members of the church and Abraham Mannikarottu, cor episcopal for giving us the opportunity to visit the premises and conducting discussions with an open mind.

The church authorities have assured us of full cooperation if any investigations are conducted by govt. authorities in the premises of the church itself in the future.

Well, if that was the statement handed over to the authorities of the church who permitted us to conduct limited investigations during our visit to the chapel, here are our opinions based on our observations. 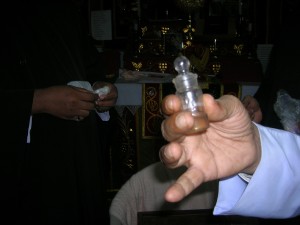 Though they possessed vials supposedly containing the liquid oozed out of the prints, the word of the church authorities is the only proof as to the authenticity of the story. In fact, there are indications that the flow of the oily liquid is the other way round, from the vials to the flex prints, through human agency! Though the miracle was supposed to be the shedding of tears by the photos, we were told that it was not tears but some oily liquid, probably in anticipation that it would be proved as not to be tears.

Again, after a prolonged legal battle between the two groups, the Orthodox church has been given possession of the churches, and this group, the Jacobite Syrian Christian Church, has now no church in this area. They are now conducting their worship in this chapel and the house in which the discussions with the cor episcopal were held. It can be also seen that there is a flow of pilgrims to this place and some local shops have opened for business, selling trinkets and other items. Since there was a crowd of the members of this church, it was very difficult for us to carry out any more investigations. The church authorities were not willing to hand over any samples of the liquid supposedly oozing out of the photos, under the suspicion that they could be tampered with. They were also not permitting us to handle the photographs or even touch them. All these rouse suspicion that they are trying to hide somethings from us. Though they were co-operative to some extent, they were not forthcoming in allowing to us to conduct more investigations into the nature of this liquid. It seemed to us that the liquid allegedly oozing out of these photos is going to be commercially exploited.

Since there were repeated statements about religious sentiments being hurt, we suspect that the same reason could be used to keep us from carrying 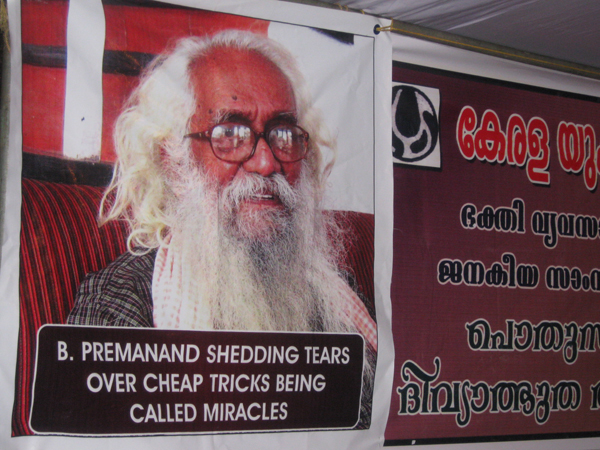 out further investigations into this alleged miracle.

After our investigations were over we had a public program outside another church in the area, where we displayed a flex print of Premanand shedding tears, and also spoke to the public about various types of superstitions. While this was going on a section of the crowd barged in and tried to disrupt our program. Some of them were brandishing copies of the statement mentioned above and were shouting as if that was proof of us having accepted the miracle as genuine! However they were forced to retreat after we made our arguments that it was our program and we had the democratic right of expression and also that we never made any claim that Premanand was shedding tears by the same method as was happening in their chapel. I had to raise my voice at one among the crazed mob who was trying to snatch the print of Premanand’s shedding tears. We had to end the program at 7.30 pm as the license for using the PA system was only upto 7 pm. However, Gopinath continued his miracle exposure program without the PA system, shouting at the top of his voice!

So, there ends another investigation into an alleged paranormal phenomenon! The whole affair seems to be a stage-managed show, to confer special status on the plot where the chapel is located. The Kerala Yuktivadi Sangham is planning on conducting more investigations into the affair. As far as FIRA is concerned, the matter stands closed.

I have been sent an email by some one who says that the above ‘miracle’ has been reported from a house in a village nearby. He says that a very perfumed discharge started from the copy of the above photo and the photo has been taken away by the church authorities. He has also threatened me that unless I explain how the miracle occurs he will be inclined to believe that it is truly a ‘miracle’. I have erased that message and hence am forced to reply through this site.
Well, apart from the threats part which have no value to us, he wants to explain something without having any opportunity to examine it, touch it or even see it properly except under the supervision of the vested interests who have a hand in perpetrating and trying to perpetuate this.
Well, let me make the following clear:
1. The church authorities are the manipulators of the whole drama.
2. The perfumed oil has been put by some of these people when there is no one looking.
3. The oil has been introduced by the priests because it is non volatile and once applied can last for months together.
4. The whole thing is a drama to hoodwink the gullible people and try to introduce a sense of awe into people and importance to the place where the chapel is located.
5. I predict that there will be a drive to collect donations to build a church at the spot and get more gullible people to follow the alleged miracle.
people like you, the person who had sent me the mail are being led into this plot and are foolish enough to believe this without questioning.
After our visit to the spot the church authorities have tried to project as if we have certified to the veracity of the alleged miracle which have categorically denied in our letter. The church authorities who are masters of manipulation are perfectly capable of such things. In fact by the same day evening we have had people waving copies of the letter handed over to the cor episcopal as if it were a document certifying the veracity of the alleged miracle. That letter could have come to those people from only one source- the church.
KYS has called a press conference and has handed over the copy of the letter to the media. They have also categorically challenged the church to prover the alleged miracle under fraud proof conditions.
Going by the past history of these people like the Metropolitan, the co episcopal and his gang we now have no reason to believe that they are either innocent or honest.