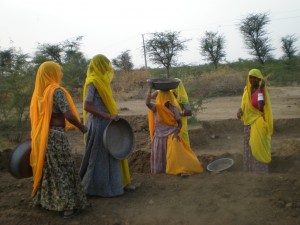 In the last week of 2009 I happened to visit a site where NREGS activities were being carried out, and I happened to talk to the workers employed there about the economic, social, and religious issues that impact them.  While my purpose of the chat with the workers was mainly economic, a few issues relating to religion emerged, which I purpose to bring to light here.

For the unacquainted, ‘NREGS’ stands for ‘National Rural Employment Guarantee Scheme’, and it promises to provide work for the rural unemployed workers in India for 100 days a year, and pay them up to Rs 100 a day, subject to completion of work. The workers who seek jobs under this scheme are usually the poorest who have no other alternatives.

I was in the Pali District of Rajasthan when on my way to a farm in an oasis in the dry state, I ran into public works of the NREGS, where about a 100 workers were working on a road. A quick scan showed that about 80% of the workers were women. It was about 4-5 PM and their work day was coming to an end. I interacted with them for about 30 minutes.

I was fortunate that they were willing to chat with me and my father, a retiree, although I was apprehensive that they might not appreciate the nosy questions we were about to ask. But I was wrong, and they were more than willing to talk about their problems.

About 90% of the women workers claimed to be illiterate (the question asked was, “how many of you can write your name?”). The only literate ones were below 20 years of age. However, all of them claimed that all their children (yes, girls included), were in school, or had completed education.

After a long chat about their economic constraints, we moved to the issues of caste, religion, and the politics of religion. Most claimed to be of lower castes, and claimed that they were often denied jobs where existing workers were of higher castes, for the fear that the existing staff would refuse to work with them. One young man claimed to have a first class graduate degree, but said that he applied in several private sector companies, and he was refused posts at the officer level and was only offered work as a labourer, and he claimed that most of these prospective employers explicitly stated that his caste was an issue (he was an SC). 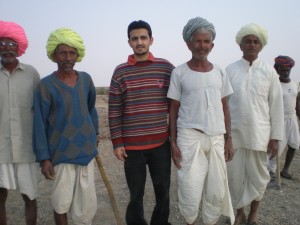 It is rather sad that caste plays such a role in Hindu society even today. The radical Hindu right wing organisations cry foul when these lower castes attempt to convert should look at the issue beyond the narrow-minded approach that they are only forced to convert. Here, I would like to explicitly state that I am against all religion and that I don’t believe this problem will end by conversion. I target all religions for their regressive practices and here it happens to be that of the Hindu majority in rural India. I would like to see irrational and regressive religion to be comprehensively replaced by humanist and rational individual beliefs.

Moving on, when asked if they celebrated Diwali, none replied in the positive. This came as a surprise to us. They claimed that they didn’t even make a special meal for the day, or lit any lamps (which is something even the poorest can afford to do, economically speaking). One pointed out that she earned about Rs. 40,000 a year, of which she spent half of it on her health care alone. She said that Diwali was relatively inconsequential, and the only religious practices that their community follows in the village nearby was what we would term animistic, although they did ‘believe’ in ‘Lord Ram’ etc. 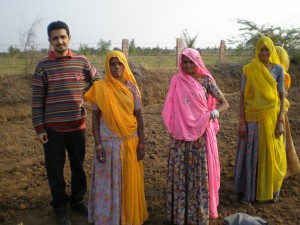 I then moved on to the issue of the Ram Mandir/Babri Masjid. I asked if they were aware of the issue. Going by the response to the Diwali question, I was doubtful they would be. But a few were. The ones who were, when asked if the issue mattered to them, said that their only priority is food and shelter, and anything else didn’t matter. They claimed that politicians came about asking of votes on several issues, and they didn’t care about it. All they wanted was food and shelter. When I asked them if they would ever join a political march (a ‘yatra’) to build a Ram Mandir, one woman retorted, “they should have a yatra to make houses for us”. On being asked about the Ram Setu/Palk Strait issue, they all claimed that they had never heard of the issue.

They were indeed bitter about their state of affairs and even blamed the higher castes, the ruling classes of the villages, who they claimed were the cause of their backwardness.

Also interesting to note is that they all barely knew about the 26/11 attacks in Mumbai by Pakistan based jihadists. They said something had happened, but didn’t know exactly what, who did it, or that the lone captured terrorist named Kasab is alive and being tried. Surely, if Hindu-Muslim riots had followed the attacks, as they have in the past, people such as them would have been victims of an issue that they understand not.

There also happened to be two women among this group who were Muslim (they claimed they were ‘Mohammaden’). They both knew of the Babri Masjid destruction, but didn’t seem to know much else about the issue. When asked why some Muslims choose extremist jihad, they claimed that there are bad apples in every group. While this is factually true, as is the case of casteism (see below), I view extremism in the name of religion as an outcome of the very nature of organised religion itself.

It is a fact that 75.6 % of India’s population lives on less than $2 a day (UPDATE: the study linked has been called into question for using non-robust techniques. The poverty rate has been shown to be much lower in other studies). The workers I talked to surely form a small unscientific sample of this majority. If right wing Hindu political parties (and right wing Muslim parties) claim that concerns of religion are primary, they are sadly deluded. Of course, liberal parties in India pander to religion too. But the scale and degree of the same is minuscule when compared to the right wing parties.

I have heard many Hindu apologists claim how the caste system wasn’t intended to be hierarchical and how it was made for the smooth functioning of the ancient society. They tend to pick and choose any text that confirms with their beliefs, and reject any that doesn’t. This of course, is something they do with scientific studies too.  I once even heard a professor with a double PhD claim that “casteism is the will of God”, citing Krishna’s words in the Gita. We all see how blatantly the caste system comes out in full colour every Sunday with the Matrimonial sections of our newspapers.

I strongly believe that casteism is a result of the nature of organized religion itself. When 1., people are trained to have blind unquestioning “faith” in religious leaders, 2., when scientific inquiry is shunned, and 3., when dissent is opposed, perversions such as the caste system emerge from the nature of religion itself. (For those who will point out that the ancient Hindu practices encouraged scientific inquiry, there are two points to be made: one, ‘Hinduism’, as it is today, never existed then. The practices of scientific inquiry have now been absorbed in the fold of ‘Hinduism’ when it is in fact outside it. Two, try telling your neighbourhood sadhu that you will now test every claim he makes scientifically and wait for a response). Casteism can only be defeated when religion itself is made to take a back-seat, and when people adopt humanistic life philosophies to lead an ethical and fulfilling life.

How the right wing Hindu political parties and organizations are ensuring our society moves closer to regressive states of being is another matter. I once heard a sadhu say on national TV that matters of religion are prime, and that roads and water can take a back-seat. Even radical Islamic leaders put their regressive beliefs ahead of the liberal democratic system that we call India. Political parties exploit this irrationality of the religious beliefs people hold for their electoral benefits.

It is time we say no to unquestioning belief as promoted by organised religion, and adopt scientific and ethical lifestyles, and work together to make India, and indeed the world, a country of progressive people where organised religion doesn’t exploit the weak.