This is the story of N.K. Singh, Senior lecturer, National Institute of Visually Handicapped School, Dehradun. While most of those who lose their eye-sight blame it as a curse for the sins committed in their previous birth and spend this life singing praises of god so that they could be normal in their next, the attitude of N.K. Singh is totally different and praise worthy. He lost his eyesight due to conjunctivitis when he was a toddler. His father tried his best to get him treated. The treatment was to collect seven types of stones from different roads and throw them into a well after waving them around the child’s head. The higher level of treatment was repeating the same with seven different flowers! When wisdom finally dawned upon the father he took him to a eye hospital at Aligarh where some medicine was prescribed but not purchased because he could not afford the six rupees needed! After all that when the child was finally taken for proper treatment to Delhi, it was too late as the optic nerves had atrophied. 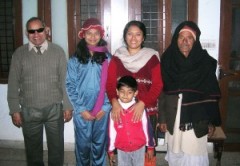 Up to the age of fourteen N.K. Singh enjoyed a carefree life, never bothering to get himself educated. At that age he started his formal education, obtained a Bachelors degree in English, followed by a masters in the same. After that he got a M.Phil in teaching techniques for the visually handicapped and has promised that he is going to work for his doctorate soon!

More than anything is his attitude towards life. He is a fully convinced atheist and had rejected all superstitions. He has challenged those who claim to heal the blind to try and bring back his eyesight and has asked me to include this challenge among my challenges, which I gladly do. Happily married to Pramila from Mangalore, who has normal sight, he is the father of Ananya and Asmit. He refuses to ascribe his loss of sight to any supernatural powers and blames the set of superstitions for having made him blind to light but not to knowledge! 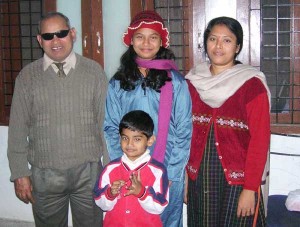 N.K. Singh and his family

His message to his visually impaired brethren is never to have self-pity but put up with what has happened and try to make the best out of what one has. He also wants them to lead a normal life. He says that he does not want anyone to pity him but only to understand that the blind too are normal people who simply have an impairment of one sense. It is always refreshing to meet someone with such views.

On my way back during the training program at Delhi a child from one of villages was brought by one of the trainees. That child has loss of vision in both eyes and reminded me of the case of N.K.Singh. The circumstances were the same-conjunctivitis, superstitions and the lack of medical facilities. Leena and Tyagi took great interest in this case and took him to some leading eye hospitals. The expert opinion was that one of the eyes could be saved. This was a great relief to all of us who felt miserable seeing a young life being wasted due to superstitions. In the case of this child the same remedies that had been tried years ago for N.K.Singh were used and, as to be expected, they did not work!