Like the previous two this visit is also to train youngsters in developing scientific temper in connection with what we call as our “Miracle Exposure Program“. We have been conducting hundreds of these in collaboration with various organizations, mainly the National Council for Science and Technology Communications, popularly called the NCSTC. This organization had started supporting our mentor Premanand in his training programs and had already published a book called “Seeing is not Believing” in Hindi and English. They had also made a kit for presenting the same, and have been engaged in such activities for nearly three decades.

This time’s visit was to cover the Garhwal portion of Uttarakhand, the areas on the route to Badrinath and Kedarnath. While the whole state is 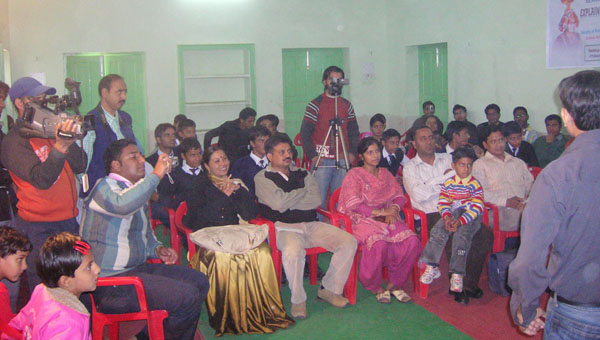 dependent on the tourists visiting these places for pilgrimages, it is also an exporter of manpower! Now, the hydro-electric power is a major revenue earner as most of the state is hilly coming under the Himalayan ranges. The whole region is full of superstitions of all sorts as to be expected where making a livelihood is very difficult, the weather being unpredictable and the climate very cold for most of the year. There are all types of spirits- the good ones being called Devatas and the evil ones as Bhooths! There are various rituals involving supernatural powers like licking red hot knives, dancing for hours supposedly in the possession of spirits, sacrificing animals etc.

There were two training programs arranged by SPECS, an environmental group. This group is lead by Dr. B.M.Sharma. His two colleagues, Bhupendra Negi and Yogesh Bhatt, were to be with me for the tour. The first program was at Karnaprayag, which is about 200 kms from the capital, Dehradun. The training was to be at the community hall of a nearby village, Jakh, situated on the slope of a hill. It was quite obvious that there had been a communication gap. It looked like all the unemployed and the aged of the village had been called to spend their few days with us! Finally at our insistence some young people were called and after that the training program took on some meaning. In the five days we managed to get some rational thinking into the attitudes of some of the participants. The young students of the nearby school who had come did get trained and some of the elders ,particularly the chairperson of the Panchayath, a very intelligent lady, promised to go with the young students and provide moral support for them. This was not bad for this lady, who had started arguing with me on the first day saying how could I deny the existence of Devathas who were the guiding spirits of the whole village!

In addition to the other usual stuff they mentioned a mantrik who had come to the village, taken a clove and dropped that into a tumbler of water. The water had turned red. He had told the villagers that it was due to anger of the gods and had collected money from them promising to conduct rituals to propitiate them. When I performed the same trick they were astonished! It was a very simple matter of dropping a phenolpthalein coated clove into a tumbler of water made alkaline with calcium hydroxide. It was quite apparent that it was not difficult to trick such innocent villagers with the simplest of the items. The highlight of the whole program was the interaction with the students of the local school called the Government Inter College. This took up a whole afternoon of numerous questions and enthusiastic participation by a good number of students. The students of this school who had joined our training were our only hope in that area.

After our program at Karnaprayag, we came down to Srinagar, not to be confused with the capital of Kashmir of the same name, where our second program was to be held. The local organizer, Bhavanishankar, a good organizer, is also a man who had taken up many causes. He was an envrinomental activist, edited a monthly magazine, and also ran a computer center with internet. His choice of trainees was an excellent one. We had students from boys and girls schools of class XI, a whole group of mass-communications post-graduate students from a nearby university and some members of women’s organizations. The last mentioned however, came on the inaugural day and never came back after that! But, the young people were very enthusiastic about learning and gathering knowledge. As one of them remarked to a TV channel, she had been full of many types of superstitions when she had joined the training and was happy that she had given up all of them in five days! They had lots of questions and got very involved. The mass-communication students looked upon this an opportunity to learn about methods of mass-communication as well as scientific temper. They had lots of questions too. They also used this opportunity to film the activities and conduct an interview. The local organizer’s contacts with the press ensured that we got excellent publicity in the local press and on TV. In fact, he announced two awards- one for the best performer and the other for the best report on the program for the participants. We had interactions with the students of the nearby girl’s Inter College, during which there was good discussion and spirited participation by the girls of the same school who were in the training program.

On the last day of the training program we had presentations by the participants. There were five groups and they put up very good performances. It is commendable that they managed to learn to do this in a few days. Then it was back to Dehradun where two interactions were arranged with girls from two colleges. It was in Dehradun that we visited the Singhs. N.K. Singh and his wife Pramila are family friends of mine for the past few years. They have two cute children, the elder daughter Ananya and the younger son Asmit, both of whom have normal vision and are doing quite well. A separate write-up will be posted about the story of how N.K. Singh lost his sight due to the superstitions of his father and family.

After the training programs at Uttaranchal I came down to Delhi on the 20th of Nov. In Delhi I had a meeting with Dr. Anuj Sinha and Dr. D.K.Pandey, the top people from the NCSTC, part of the Department of Science and Technology of the Govt. of India. They were very keen on developing new trainers for our program on miracle exposure and we have planned to have a training program in Hyderabad in March, 2010, to build the next generation of trainers to continue our work. More about that later.

On the next day we had interactions with parents of children from the Rockfort school in Dwarka, Delhi. This was followed by a small meeting 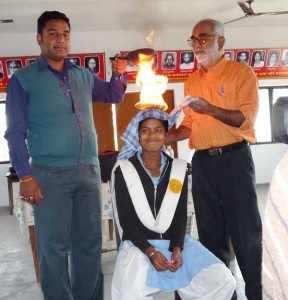 with young students at a home in Khanpur, Delhi. On the 21st we started a training program for Social Development Foundation at Gharwal Bhavan, Delhi. There were about 40 participants from all over North India, some from Delhi. They spent four days learning various techniques for making people aware about so-called miracles. They were also made aware of the techniques of the quacks and charlatans who cheat people in the name of supernatural powers. At the end of the training program a feedback was taken about what they intend to do with the things learned. Many have promised to start campaigns in their home places. We do need a support mechanism to help them to conduct their campaigns, providing them with chemicals and special equipment that may be slightly expensive etc. We do have to work out some methods by which we can provide them with financial support and monitor their activities. I was supported by Leena, Tyagi and Gurinder. The moving spirit behind organising the program was V.B. Rawat who managed things quite well through his organisation and aides.

After the programs ended I traveled back to Mangalore, and am writing my reports from there while getting ready for the next round of tours!