Thanks to Karen Armstrong, the author of The Case for God, we religious people FINALLY have a powerful strategy for combating reason. Contrary to its title, the book does not make a case for God at all. The story Ms. Armstrong lays out is, in actuality, the most succulent red herring that we can throw down to protect religion from critical thought. This is the basic idea: Atheism causes religious fundamentalism.

According to Ms. Armstrong, before science came on the scene people did not have any desire to know the ‘facts’ about reality. All pre-enlightenment Christians viewed the stuff in the Bible about Adam and Eve, the devil, the queers, the adulterers and the son of god, as metaphors for states of emotional well-being. They assigned no factual significance to all of this, until the atheists came along and forced some religious people to start understanding the scriptures as literal truth. Thus, atheists (and science itself) gave birth to religious fundamentalism!  The same goes for all the world’s religions. Thanks for your awesome revisionism, Ms. Armstrong. In my religious apologetics I have always wanted to employ Karl Rove’s strategy of going for your opponent’s strength while ignoring the facts.

Of course it is the new atheism that is responsible for religious literalism. Without people shoving facts down our throats why would anyone ever feel the need for any answers to fundamental questions about the nature of reality? Religion was never a response to primitive man’s quest towards understanding the natural world. If it weren’t for these sciencey types, we could all just get along without wasting time looking for ‘facts’ that could help us understand the universe. We could all just accept that inner intuition is the only true way of understanding anything, and leave it at that. This is what all religious people did before science came along with its ‘facts’ and numbers.

“…it was the empirical emphasis of modern science that encouraged many to regard God and religious language as fact rather than symbol, thus forcing religion into an overly rational, dogmatic, and alien literalism.” 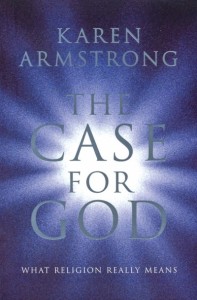 Ms. Armstrong understands that the best way to defend religion from fact-based criticism is to divorce religion of facts. In the process, we must also ignore the norms of fact-based debate while inventing arguments for use against atheists. Kudos, Ms. Armstrong, for your dexterity at cherry-picking the aspects of religion that appeal to us progressive believers, and for belittling literalistic versions of religion as being a reaction to science, while actually coming up with the best reaction to science there is- ignoring reality!

A significant portion of the book is devoted to establishing how religions make us human, by pointing to the essential facts about culture and society that religious institutions have absorbed into themselves. Karen Armstrong writes with spiritual conviction about all the social, emotional and developmental support that religion provides to us, while decreeing that all the bad stuff in religion comes from atheism! Not only is religion vital, but anything bad about religion arises because of the criticism of religion. Brilliant! The Organization of the Islamic conference must have had something similar in mind when they petitioned the UN to ban blasphemy because it causes religious violence. Instead of getting religious fundamentalists to be tolerant of appropriate criticism when they get their facts wrong, we must attempt to abolish all forms of rational criticism of our religious beliefs. This will make religious fundamentalism disappear. The Muslims will embrace the Jews, and so on.

Here is another quote from Ms. Armstrong:

“Homo sapiens is also Homo religiosus. As soon as we became recognizably human, men and women started to create religions. We are meaning-seeking creatures. While dogs, as far as we know, do not worry about the canine condition or agonize about their mortality, humans fall very easily into despair if we don’t find some significance in our lives. Theological ideas come and go, but the quest for meaning continues. So God isn’t going anywhere. And when we treat religion as something to be derided, dismissed, or destroyed, we risk amplifying its worst faults. Whether we like it or not, God is here to stay, and it’s time we found a way to live with him in a balanced, compassionate manner.”

This is such a refreshing way of ignoring science to make the amazingly insightful point that human beings need meaning. It’s true that all over the world secular humanists have long promoted social alternatives to replace old institutionalized superstitions, but we must ignore these kinds of atheists and focus our ire on the few atheists who dare to criticize our institutions. If we can get the humanists to condemn the criticism of religion that comes from those atheists who are primarily anti-religion, we can continue to keep secular humanism itself irrelevant. Actually acknowledging that a secular moral education can impart a limitless sense of wonder and meaning in life is dangerous to our agenda. So, Ms. Armstrong is right to criticize atheism for leading to fundamentalism in religion and removing meaning from human existence. People need to see that atheists are nothing but mean-spirited folks who are obsessive compulsive about ‘facts’. Atheists are, obviously, one-dimensional. Atheism cannot offer any meaning. It’s true that atheism is simply a non-belief, like aunicornism, and there are other fact-based ways of giving life meaning, but if we keep the focus on atheists and ignore the secular humanists, the latter will never have a chance to show religious folk that there are perhaps better and more meaningful ways of perceiving human existence and our place in the universe.

Karen Armstrong’s strategy seems to be working already.A number of secular humanists have come out criticizing the “New Atheists” for being too abrasive towards religion. Great job, Ms. Armstrong, for getting the humanists to do our work for us.

I am emboldened by Ms.Armstrong’s courage to go after the giants of atheism,

“…in claiming that God is the source of all human cruelty, Hitchens and Dawkins ignore some of the darker facets of modern secular society, which has been spectacularly violent because our technology has enabled us to kill people on an unprecedented scale.”

The hyperbole in representing Hitchens and Dawkins’ view of God as the source of all human cruelty may be considered a straw man argument in some circles, but I see exactly where you are going with this one, Ms. Armstrong. If we let it be known that these men actually have a more complex, compassionate and complete view of human morality, the cat is out of the bag. It works to our advantage if we present these so-called leaders of the new atheism as ignorant of all deep human affairs. It must be true, since after all, atheists have no meaning or purpose in their lives.

In conclusion, Karen Armstrong does more for religion by attacking any criticism of the idea of God as ill-posed, while presenting her book as an actual argument for God. In essence, Ms. Armstrong has shifted the argument from why it matters that understanding the ‘facts’ about religion, god and belief are important, to why such analysis of ‘facts’ is dangerous. I recommend that you go out and purchase this book if you, like me, feel that the debate between science and religion is best presented as a black and white dichotomy with no shades of grey, or red or purple.