As a practicing psychiatrist in the U. S. A., it is my job to get to the root of my patients’ ‘irrational behavior.’ There is always an explanation, rooted in the patient’s past, why a patient behaves the way he does. But the patient is not aware of it. Making the patient aware of the reason behind his current irrational behavior often changes his behavior, provided he is an open-minded person capable of developing a trusting relationship with the doctor. For example, a woman does not know why she breaks up with men who become seriously interested in her. Once she realizes that this has to do with her irrational fear of rejection, rooted in her childhood rejection by her father, she could learn to trust men once again.

Delusions are beyond reason

Some irrational behaviors are based on delusions, and are not amenable to reason. For example, one cannot reason with a man who believes that for the past three years Mafia has been trying to kill him, by telling him, “If the Mafia really wanted to kill you, it would take only three minutes to do so.” This person has a fixed irrational belief, which serves him a specific purpose. Likewise, you can’t reason with a deluded Jihadist that the seventy-two women he hopes to meet in heaven after achieving martyrdom cannot be virgins in view of the fact that several thousands of brainless Jihadists like him have preceded him there.

Like individuals, every society on earth has its own set of irrational beliefs and behaviors. Some of these behaviors are universal, namely, they are shared by all societies on earth. A common example is religion. Most people on earth swear allegiance to one religion or another, one god or another. The degree of irrationality in religious beliefs varies from religion to religion. In one religion, people meet for prayer once a week, sing together, socialize and go home. On the other extreme, in another religion, people dance in trance-like state, holding poisonous snakes in their hands. Sometimes they die from snakebites.

Very often, irrational thinking is culture-specific. For example, insisting that the guest eat and drink something at the host’s house before leaving, is a type of irrational behavior widespread in India, but not in America. In India, a guest refusing food or drink would certainly make the host very angry. Almost all Indian hosts are beyond any reasoning in this matter. Even if the guest says that he is so full that if he ate even one piece of sweetmeat he would vomit, would make no difference in the behavior of Indian hosts. Few Indians know how this irrational behavior started. Here is the true reason: For thousands of years, there was always food shortage in India. The guests did not want to strain the host’s food supply and the hosts did not want the guests to go hungry. So, both of them played this little mind-game: guests pretended to refuse food and hosts insisted they eat. Now, in the twenty first century, food is aplenty. Besides, everybody has weight problem. Yet, the mindless forcing of the guests to eat continues unabated. The host neither listens to nor believes what the guest says. His own agenda is to prove what a wonderful host he is. He is least bothered if the guest drops dead after eating at his house.

Customs are nothing but dead habits

In India as well as in America, even the most educated and accomplished Indians behave in irrational manner like this. I can give you thousands of examples of mindless behaviors in Indians, all of which had a very good reason in the beginning. The only problem is that that reason has no relevance to the current reality. Let me give you a few examples:

In all these and thousands of other examples, the following factors become evident:

Trapped in the ancient mindset

Let us now see how these observations can be applied to Hindu fundamentalists who are attacking women in the restaurants, Christians in the churches and Muslims women in schools:

So, they think, they need to attack those who are violating the values of their Dharma, attack those of other Dharmas, and attack anyone seen as 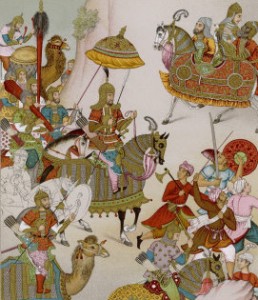 supporting the people of other Dharma. Here let the reader remember that right-wing Hindu fanatics assassinated Gandhi for “siding with Muslims.”

Obviously, these religious fanatics are living in India of the past two thousand five hundred years. They do not realize that the Dharma they should protect now is the Constitution of India. The ancient term, “Dharmo Rakshathi Rashathah” means “The Law protects him who protects Law.” These fanatics have no idea that in the modern world this means, “The Constitution protects him who protects the Constitution.” To them, whose allegiance is to Brahmanism, it is impossible to conform their behavior to India’s Constitution. If we tell them that the Indian Constitution, the Dharma of modern India, considers their behavior as anti-social and treasonous, they would not believe us. They all consider themselves as pukka patriots.

To make matters even worse, these ignoramuses have no knowledge of either the origins of Brahmanism three thousand five hundred years ago or its fundamental tenets. So they depend on what their equally ignorant religious leaders and political supporters tell them what Brahmanic Dharma is. And based on their faulty knowledge and irrational belief, they act in a manner detrimental to the nation.