“Two hundred years ago, river Tungabhadra flooded the nearby towns of Raichur, Bellary and Kurnool. The holy town of Mantralaya was also in danger.  While the furious Tungabhadra was destroying everything in its path, she was powerless in Brindavana.   The waters of Tungabhadra circled Brindavana, submerging all the adjacent buildings, but not even a single drop of water entered the Moola Brindavana.”

In year 2200, the above statement could well be the latest entry in the list of miracles attributed to Swami Raghavendra.  In case you don’t know 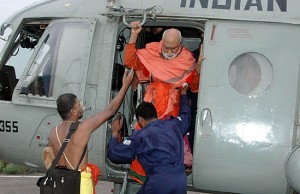 The official website of the Raghavendra Swamy temple lists several miracles attributed to Swami Raghavendra, including reviving the dead and ridding Tanjore of a 12 year drought. In the context of these miracles, parting of the Tungabhadra River is no big deal.

I guess this how some myths get created.  While a lot of myths might be total fabrications, some of them might be created by completely distorting a historical fact.

Now let’s look at the real facts of the flooding of Mantralaya.   The Raghavendra temple was completely submerged and several people were stranded.  Mantralaya Guru Raghavendra Mutt pontiff Swamy Suyateendra Acharya was also one of them.  Luckily for him, the chief minister of Karnataka, B S Yeddyurappa,  is big devotee of Raghavendra.  Even though Mantralaya is in Andhra Pradesh and thousands of villages were marooned in Karnataka, the CM of Karnataka flew helicopters outside his jurisdiction and rescued Suyateendra and his disciples. The other devotees were left stranded.

Once the floods subsided, some people started reasoning and then got upset about the pontiff deserting them and fleeing for his life.  As the criticism mounted, the pontiff was forced to respond. See the image below (scanned from the newspaper DNA India) for Suyateendra’s statement.  Note the use of the word ‘only’. 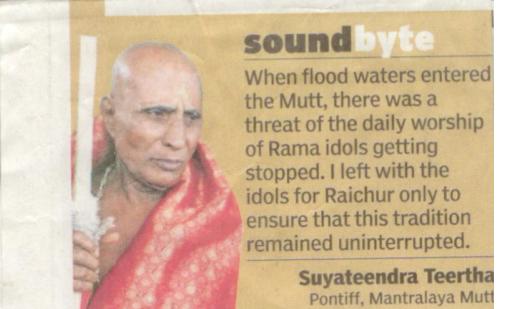