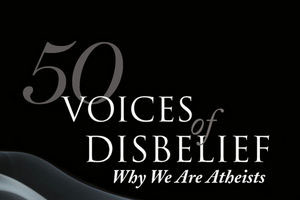 A new compilation of essays by atheists from around the world, titled “50 Voices Of Disbelief: Why We Are Atheists“, is to be released soon. The book contains essays by two of our contributors, Sumitra Padmanabhan and Prabir Ghosh, and is edited by Australian writer and bioethicist Russell Blackford, and Udo Schuklenk, philosopher and bioethicist at Queen’s University in Canada.

Excerpts from the promotion email sent to Sumitra Padmanabhan by Russell Blackford:

“Hi, folks – this is to alert you that 50 VOICES OF DISBELIEF: WHY WE ARE ATHEISTS will soon be appearing in bookshops. The official publication dates are 9 October in the UK (and Australia) and 9 November in the US….. The back cover carries excellent endorsements from Johann Hari, Ariane Sherine, and Jerry Coyne…….

The book is also available for pre-order on Amazon and Amazon UK, and, for whatever it’s worth, has been holding down pretty decent rankings so far especially for a book from an academic publisher that hasn’t even been released yet. The book’s Amazon page is here.”

Here is a brief description from the back cover of the book:

“50 Voices of Disbelief: Why We Are Atheists presents a unique and thought-provoking collection of original essays that address personal disbelief in a higher power . Drawn from an international cast of professionals in the fields of academia, science, literature, media and politics, contributors offer carefully considered statements of why they reject the idea of a deity governing the universe and human affairs. Several essays also address such issues as the social role of religion and its alternatives. The responses feature a stunning diversity of viewpoints and tone, ranging from rigorous philosophical arguments to highly personal – at times even whimsical – accounts of how each of these notable thinkers have come to reject religion in their lives. Whether you’re a believer or not, 50 Voices of Disbelief: Why We Are Atheists offers an intellectually stimulating journey into the possibilities for rational and reasonable people everywhere to live without the crutch of religion.“ 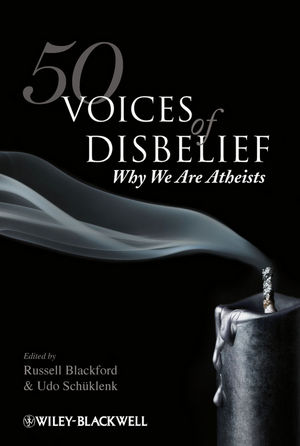