Basava Premanand, one of the greatest rationalists and skeptics of our time, passed away earlier today at Podanur in India. Here are two brief obituaries, one by Narendra Nayak, Premanand’s successor and president of the Federation of Indian Rationalist Associations, and another from Bangalore Skeptic, published by T.V. Manoj. 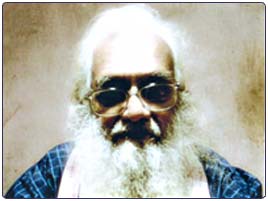 As I sit before the keyboard and type out this, the tears are not stopping. Though it is irrational to weep at someones’ passing away, which is an inevitability of life, I still feel a void. Premanand was always there to advise me on some problem that I could not solve, or had a hint for some miracle which was to be exposed. More than that, he was an inspiration to all of us.

As he lived, he died- a man of principles to his very last. He has donated his body to the medical college where it will be taken tomorrow morning so that the students can learn something from his now defunct body. He had told me specifically not to ever cancel a program when he died. “Don’t ever give up some activity to see my body”. Today I am happy, despite the streaming tears, that I have a program at Bhubaneshwar in 1 hour. This morning we had program at the Teacher’s Science Congress and as soon as that was over I got the call that Premanand has passed away.

He has left whatever property he has to FIRA (Federation of Indian Rationalist Associations), particularly his books and the copyright. He has made arrangements to keep the museum running and provided a legacy to us to continue the work that he had been doing.

Salute to a brave warrior, a principled human being, a rationalist and humanist to the core. We promise you, Premanandmam (uncle, as I used to call him), that we shall hold the flag high and continue those battles that are unfinished. Let not the purveyors of superstitions rejoice because he is no more. We shall go ahead with all that he wanted to do and could not due to the many constraints. 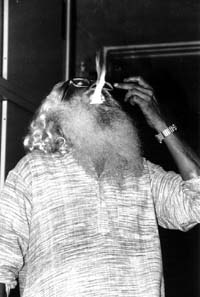 B. Premanand, the doyen of Indian rationalist movement, is no more. He breathed his last on 04.10.2009 at 2.20 pm at Podannur, Tamil Nadu. He was 79. According to his wishes, his body has been donated to the local medical college.

Born on 17 February 1930 in Kozhikode (Kerala), Premanand was a keen observer of paranormal phenomena even in his childhood. In his teenage, he approached assorted swamis and gurus to gain spiritual insights but soon fell out with each one of them when he realized that they were all fakes. In 1969 he met the ace Sri Lankan skeptic Dr Abraham Kovoor who was in India for his “Miracle Exposure” lecture tour. That was a watershed in the life of Premanand, who immediately plunged headlong into the business of debunking spiritual tricksters. After Dr Abraham Kovoor’s death in 1978, Premanand continued Kovoor’s famous challenge of offering One Lakh Rupees to anyone who could demonstrate psychic abilities under fraud-proof conditions. Admittedly, there have been few takers.

During his tumultuous campaign spanning over three exhilarating decades, Premanand visited almost every village and town in India exposing godmen and their miracles, conducting science workshops for the educated and the laypersons, giving public lectures and demonstrations. He visited about 49 countries with his mission to spread skepticism and critical thinking. He was given a Fellowship by National Council for Science and Technology Communication of Government of India for his efforts to spread scientific awareness.

Premanand’s most famous target has of course been Puttaparthi Sai Baba, the number one spiritual fraudster in India for decades. Once he famously filed a Civil Writ Petition in Andhra Pradesh High Court against Sai Baba under Indian Gold Control Act! He wanted the government to proceed against Sai Baba for materializing gold from thin air because it violated Section 11 of the Gold Control Act, which mandated the permission of the Gold Control Administrator for manufacturing gold! Given the clout godmen have among all strata of Indian society, it is not at all surprising that the case was dismissed by the court. Premanand has compiled a massive collection of records on the infamous murder of six individuals in Sai Baba’s ashram on 6 June 1993 and has brought it out as a book (Murders in Sai Baba’s Bedroom) running into more than 800 pages. This book is a “collector’s item” for those who want to know the truth behind the shady dealings in the ashram.

For more than two decades, Premanand published Indian Skeptic, a monthly magazine, dedicated to spreading rationalism and scientific temper. The magazine was an invaluable link between various rationalist groups and individuals in our overwhelmingly religious country. Through his Skeptic Book Club, he has brought out a number of books exposing godmen and their antics. His most popular book, Science versus Miracles, gives natural explanation of about 150 “miracles” including those commonly performed by the godmen in India.

In November 2006, Premanand was diagnosed with cancer, and underwent a major surgery. But this did not prevent him from continuing with his mission. Barely a couple of weeks after he underwent the surgery, Premanand attended a meeting of rationalists in Bangalore in January 2007, when BangaloreVicharavadi Sangha (Bangalore Rationalist Association) was founded. He attended the 6th national conference of Federation of Indian Rationalist Associations (FIRA), of which he was the founder-convener, held in Pune in April 2007 and accepted an award (for his contribution to rationalist movement in India) presented to him by Maharashtra Andhrashraddha Nirmoolan Samithi. He attended the 25th state conference of Kerala Yukthivadi Sangam (Kerala Rationalist Association) held in December 2007 in Thiruvananthapuram. Premanand continued to bring out Indian Skeptic every month, without missing even a single issue until late 2008 and published a number of book on rationalism through his Skeptic Book Club. Despite his failing health, he completed and opened to public his long-cherished project on 5 March 2009, a permanent exhibition on the Method of Science at Podannur, Tamil Nadu.

His deathbed testimonial made barely a couple of weeks back, on 20th September 2009, re-affirmed his commitment to atheism and other rationalist convictions with which he lived by. This document has since been published in a number of rationalist/science websites (see here and here) and will continue to be an inspiring document.