In Kannada there is a very popular saying: “as connected as Imam, Sabi is to gokulashtami“, which in other words means what does a Muslim have to do with gokulashtami, a Hindu festival? Well the same could be said of Ayesha Yasmin who joined for the Bachelor of Commerce course at S.V.S.College, Bantwal. Of course, S.V.S. are the initials for Sri Venkarama Swami, the popular deity of the Gowd Saraswath Brahmin community who had a lot do with the founding and running of this college, though as of now it is a government aided institution.

This college got into the headlines for all the wrong reasons as things in this area are now wont to. We are well known for our moral policing, pub attacks, church ransacking, communal riots and “religious sentiments” getting hurt at the drop of the proverbial hat. The latest in this is this curious case of the girl who wants to wear a burkha to college. For those who may not be familiar this term it is a garment which supposedly guards the morals of Muslim women, and according to some is the prescribed dress code for every Muslim woman above the age of puberty. Let me tell you frankly that I may have a bias in this case because the correspondent of the college, Venkataramana, Dr. Bhamy V. Shenoy, is a close friend of mine and we have fought many a issue together in the consumer and rationalist movements. He has taken a stand against unscientific attitudes and beliefs and has been at the receiving end of uncomplimentary remarks from communalists of various hues. Two years ago, he conducted a series of lectures on true education and had invited me to speak about superstitions. After this he had to face the wrath of the community of Gowd Saraswath Brahmins into which we were both born. He had been under attack for inviting a person like me who encouraged students to ask questions about their beliefs, customs and rituals. Probably some of the students had gone home done just that, naming me as the inspiration. 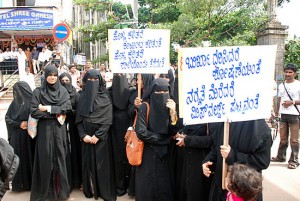 This girl, Ayesha, who had got admission into the college, had come to the class wearing a half burkha. Since the college authorities had banned all kinds of dress connoting the religious identities of the students she had been asked to remove the burka, which lead to a situation where there was a confrontation between her and the management. It was the policy of the management that the students would not be allowed to wear any sort of dress which would be identified with a particular religion. They claimed that on previous occasions when students came to the college dressed in usage with some religious rituals which they were following, they were not allowed to do so. These students who were Hindus pointed out to this girl who was wearing a burkha which was a Muslim religious symbol and asked the management that if that could be allowed why not their religious costume. In fact they threatened that they would come to the college wearing saffron shawls. In a way the hand of management was forced by a set of students of a particular community and the student organization with affiliation to the saffronites. So, action was taken to suspend her from the college.

That was when, to put in polite words, the excreta came into contact with revolving blades! The issue got blown up into an international crisis. Some of the TV channels, including BBC went on air broadcasting that how the religious freedom of a community was being threatened by insensitive managements. There were complaints lodged with the district authorities by this girl, her relatives and supporters. Some of the student organizations took to the streets to protest what they called was interference into the religious rights of the minorities. However, some of the secular student organizations which had initially said that they would support the cause withdrew citing that while wearing a burkha was the choice of an individual they would not support any organization which was making it compulsory for girls belonging to their community to wear them. In fact, some of the organizations which were associated with the protest march had such tendencies. This controversy erupted in other colleges too, wherein a uniform dress code was prescribed for all the students which had not provision for burkhas. However, the controversy was settled with the girls being permitted to wear scarves of permitted colors.

Some others too jumped into the arena. The state human rights commission warned the college not to interfere with the religious rights of the students. A number of organizations for and against tried to foment trouble with their statements. Some newspapers too added fuel to the fire. The Mangalore University to which all these colleges are affiliated has now called a meeting of the heads of the institutions to discuss the issue of a common dress code and the ways to enforce it. The controversy had an undesirable effect too. Some of the girls of the Muslim community who were till that point not wearing burkhas started doing so as a protest against the dress code and what they perceived as interference in their religious matters. Some of the colleges where nuns were attending dressed in the robes prescribed by their orders were in a quandary. If they could be allowed to dress in clothes which were identified with a particular religion why not others? The affair a la Ayesh Yasmin opened a can of worms which is now adding fuel to the already surcharged communal atmosphere and the boiling cauldron of communal strife. 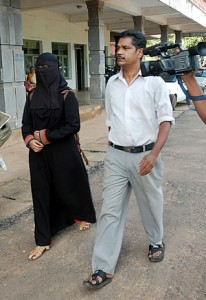 Ayesha Yasmin with her father.

Do we of the rationalistic humanistic bent of mind support the freedom of dress of someone, however regressive that may appear to us? Do we say secularism at all costs including prescribing a dress code for college students? This is the dilemma that we are facing as of now. If one is going to enforce a dress code what about the Sikhs who wear turbans and beards? If they be allowed to dress as per the dictats of their religion, why not the others? If priests and nuns, under religious training and also studying in secular educational institutions; are allowed to dress according to the rules of their order why not the others? Most of the institutions prescribe trousers and shirts for their male students which were identified at one time with the Christian missionaries and one could argue that it has connections with that religion! That could also apply to white shirts tucked into khaki shorts worn by you know who!

In the whole debate, or rather the cacophony, the academic issues have gone over the fence and instead of improving the education system, which is now in a state of a mess, the energy and time are being spent on dress codes and religious freedom. The basic questions are still not answered – that if someone is allowed to cover the face under the pretext of freedom of religion, what prevents impersonation and malpractice? Why do people want to wear their religion of their sleeve or rather on their face? What is the meaning of true secularism? If the very same principles of secularism were to be applied to all activities in educational institutions, all pujas and such religious rituals should not be allowed. In fact the very name of the college connotes a deity belonging to a particular religion. If that was to be complied with, what about the innumerable institutions all government-funded and named after Christian saints and Christ himself? Why should prayers be held in all educational institutions to a god in whom the atheists have no belief? How can religious symbols of the managements of the institutions be allowed to be conspicuously displayed in them? The controversy seems to be never ending. Perhaps, the French type of secularism in which no religious symbolism of any kind is allowed in any publicly funded institutions could solve this problem or would it cause more of them? Which government. in India has the courage to do that?