A pandemic is something to be welcomed in our country, for those with vested interests. Perpetrators of all kinds of superstitions have a field day. Added to that hoarders of things starting from masks (most of them totally useless) to manufacturers of drugs and medicines (effective or not) are out to make profits. In India where bearded saffron wearing gurus are considered to be very epitomes of wisdom- worldly as well as otherwise pronounce cures and preventives for diseases whose names also cannot be pronounced by them. Added to this a government whose spokespersons do not have the spine to commit themselves on claims of such including the proponents of so called alternative systems of medicine add to the confusion.

Our common people, whose minds are already steeped in all sorts of superstitions, when confronted with a disease which is supposedly deadly, panic and try to cling to straws some of which are already rotten. We have had things in our country starting from pujas to mantras and remedies from cow’s urine to tulsi leaves as preventives for the A H1 N1 epidemic going on now. The media has gone to town on this issue, many channels running the same footage over and over again with rhetorical questions like what the govt. is doing about this and that! Near Mangalore when some people claimed to have made concoctions which can allegedly cure this flu, there were stampedes to consume the potion. When the bearded encyclopedia that goes by the name of Baba Ramdev whose actual name is Ram Kishen Yadav pronounced that a particular root can cure swine flu, people started digging all over to get at this root and prepare its extract. Many newspapers carried his unproven pronouncements prominently. Homeopaths too jumped on the bandwagon and put forward the claims that their sugar pills with some name like influenza are a sure cure.

Mantras claimed to be preventives and cures for this disease started doing their rounds by SMS. Not that they stopped at that. It was also claimed that National Institute of Virology, Pune, had notified that eucalyptus oil could prevent infections of the same flu. The institute had to clarify on their web site that they had made no such recommendation. In Karnataka where the chief minister himself leads by his belief in superstitions of all sorts, the members of his cabinet as well as common citizens were his faithful followers. Some of the cabinet ministers conducted religious rites to avoid the epidemic. In Bangalore- hi- tech city, full of science institutes and software parks, pujas were conducted to ward off this menace. That the worshipers and conductors of the ritual wore face masks shows how much faith they had in their own rituals.

In order to reassure people that there was no need to panic, and to make them aware of the facts about the epidemic, the rationalist organizations called a press conference at Mangalore on the 19th of this month. We were represented by Dr.Madhava Rao, psychiatrist and the President of the District Rationalist Association, Dr.Srinivas Kakkilaya, a physician well know for his no nonsense approach to medicine, Dr.Sandip Nayak, a young recently qualified doctor and yours truly on behalf of Federation of Indian Rationalist Associations. To show how people are taken for a ride by peddlers of quack remedies with their unsubstantiated claims, we distributed to all members of the press packets of colored tablets called SWINIL (photo). The wordings on the label are cleverly manipulated half-truths and total lies. The sarcasm was lost on some of the audience who believed that we had really come out with a cure for swine flu.

A number of questions were asked to the doctors about various aspects of swine flu, which showed that even the well informed members of the press were not up to date on the many aspects of this epidemic. In our press-note we emphasized on the need to demand for proof whenever claims were made. We also emphasized on the fact that A H1N1 infections were self-limiting disease which could be cured by the development of resistance in the body itself and there was no need to panic about it. We also laid emphasis on how relying on unproven remedies could cause some of the vulnerable sections to neglect the really preventive aspects and make them get infected.

If one looks at the publicized un prove things about A H1 N1 epidemic one would be really surprised at the colossal ignorance of the media including one allegedly health channel which I have seen. This channel showed the footage of pork being sliced and a voice in the back ground announced that swine flu was a disease caused by eating pork! The same channel had ‘doctors’ from every conceivable branch of quackery which goes in the name of alternative medicine announcing a plethora of concoctions, pills, mantras and so called breathing techniques to ward off this illness. Needless to add not a single one of these had been tested under double blind conditions. Some supernaturalists suggested that the epidemic was a result of the solar eclipse’s evil effects causing the abnormal multiplication of organisms, conveniently forgetting that it had started much earlier. Anyway even if we were to point this out, they could very well escape saying that it entered India after that! Like others of their ilk they too had solutions for the problem, with the appropriate gadgets to ward of these available with them. As to be expected they caution people not to buy such from anyone else because only ones which they made are the genuine ones.

The government authorities did nothing to avoid this sorry state of confusion. In fact some of the central govt. health authorities have gone on record that the remedies under the so-called ‘alternative’ systems of medicine are undergoing testing! Some statements even asked people to boost their body immunity by consuming Ayruvedic and Unani medicines without bothering about the need for evidence regarding their efficacy. The confused Karnataka government authorities reacted as expected with some of the ministers resorting to rituals to prevent the disease! This included the Home Minister who is a qualified doctor in the scientific system of medicine! This made us remark that we are afraid that he may do the same thing if there is a terrorist attack! Instead of directing the law and order machinery he may go to temples for performing rituals to get rid of the terrorists.

As the number of people tested positive for the infection increases, we see the media becoming more and more irresponsible and the people more 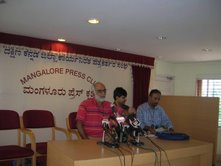 and more desperate. In some places nearby where some medicines allegedly effective against this fever were being distributed, there was a queue stretching for miles together and people waiting for their turn to get the medicines for days together. The local authorities did nothing to carry the truth to the people that swine flu has the same infectivity and mortality rate as any other seasonal flu, and that more than 99% get well and suffer no long term ill-effects at all. The lack of leadership at the top level has demoralized the entire government machinery and hence the total confusion at every level has made the people cynical about the efforts of the govt. to tackle this epidemic. In such a situation it is the profiteers and the quacks who exploit the available opportunity to take the people for a ride. However to be fair some senior practitioners of the Ayurvedic system of medicine have gone on record refuting claims of some of their fraternity who have been claiming that their concoctions can cure this disease, which really is a welcome sign that they have realized their limitations and are sincere. Their approach is to tackle only those things which they can really cure.

We are trying our best to tackle this by trying to carry the information to the people. But sometimes we do get a feeling that ours is a cry in the wilderness among the cacophony of misinformation that is being spread by the promoters of the alternative medicines, the proponents of all unproven techniques and the hoarders of so-called protective and curative measures, some of which have been proved to be effective. In the mad scramble of the media to report the number of deaths due to A H1 N1 influenza it has been very conveniently forgotten that many times this number die each day in our country due to many other preventable and treatable causes!