If this sounds like the title of a B-grade Hindi movie, I crave your indulgence. It was all of a sudden that Basava Premanand decided to pay a visit to Mangalore to see some of his old friends and acquaintances for what we feels is his last visit. Though we are not inclined to agree with him about that, it is certainly a miracle that he is alive as on today. He was written off when diagnosed with cancer in November, 2006. An eminent specialist to whom he was taken soon after informed his relatives that it would be better to leave him alone as the large lump in his stomach could not be operated upon. In fact it was said that if he was operated upon, he would die on the table. But, a cancer surgeon was ready to operate and Premanand with his usual candor said better die on the table than have a lingering death. 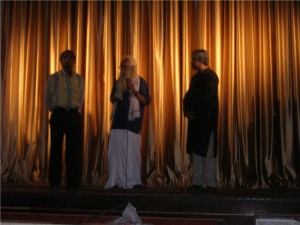 However, the operation was successful, but the post operative complications should have finished him off. He successfully fought them like he has taken on miracle men for the most of his life. He was so emaciated post operatively that we felt malnutrition would get the better of him. He overcame that with success and within a few months attended the general body meeting of FIRA held at Pune. At that time he had no secondaries and we were worried about when they would appear. Appear they did in July, 2008. Chemotherapy was tried but it did not work. So, again he was written off. But, the strong fighter that he is went on to finish the work of the method of science exhibition which was his life’s ambition. That being successfully done and the exhibition has been thrown open to public in March,2009 he has gone on with the second part- the first floor of the same building in which he wants to lodge his collection of books and miracles that he has exposed in his long stint as a guru buster. The work is now going on and we are sure he will accomplish that too!

During his visit, we felt that we could have some interactions with the citizens of Mangalore and the activists of the movement who wanted to speak to him. Such an interaction was held at the Canara College, Mangalore on the 26th July. About 40 attended this meeting which was held despite the threats of certain groups. The jurisdictional police station was informed that there would be disturbances and the head of the institution was also warned about the same. However, our movement which is always under threat from a variety of such reactionary groups went ahead with the meeting which went off very peacefully.

This gave an opportunity to ask him about his work and his views on a number of subjects. Though he appeared very tired physically he was mentally alert and replied to queries and took active part in the discussions. Some of the issues raised and discussions that followed are reported 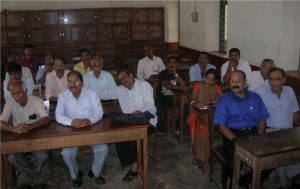 The first question was by Vasudeva Uchil of Samudaya, a progressive minded cultural organization who queried him as whether he saw any change in the attitude of society towards the rationalist movement in the last four decades. He replied that he could see a change and that when he started his work people were not prepared even to listen to him. If children wanted to hear him, the mothers would pull them away. Now, he said at least they are prepared to hear us. But, he regretted that the media has now started the spread of new superstitions and felt that there was great need to counter them. The next question was about the attitude of rationalists to god. His reply was that we are not bothered about god. It does not matter whether one exists or not. But, we are really worried about what happens in the name of god, the persons who claim that they are god, the agents of god and exploitation that goes on in the name of god.

He was asked about the efficiency of yoga as an exercise and he replied that he was one of the five top disciples of Swami Narayananda. The others were B.K.S.Aiyengar, Swami Rama, Swami Gitananda and one more whose name he said had slipped from his memory. He also said that he ran away from the ashram when he saw this swami who claimed to be celibate having sex with a woman who had come to learn yoga from him. He said that among the yogic postures only Surya namaskara could be categorized as an exercise because it involved movement and bending. When queried about rebirth he gave examples of how people had been fooled in the name of such and a case of a lady who claimed to be reborn in Nagpur. It was just a case of a jilted lover seeking to reclaim the heart of her lover! He gave many other examples. He also narrated instances when he when he was in New York and Washington and had invited Stevenson a top proponent of the rebirth cases to a debate and how he had not turned up. The discussions went on for nearly three hours and despite the threat of the saffronites none of their goons turned up to either join the proceedings or the discussions. The proceedings were reported in some newspapers of the area. 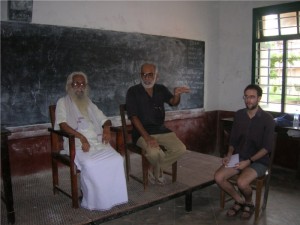 On the 27th of July, a local organization of science activists had a drama performance at the Town Hall to collect funds for their activities, mainly for those of the Democratic Youth Federation of India. When they came to know that Premanand would be in town that day, they invited him to come over and wanted to honor him. He was invited on the stage and a well known activist of the Konkani culture movement, Eric Oziero, was asked to present him a shawl and a garland. When he touched his feet Premanand told him that it was not correct and spoke to audience for a few minutes. He told them that though he was 80 years of age he continued to be an atheist and did not believe any supernatural forces or powers.

He returned to Podanur on the 28th and when going informed us that after finishing his work of building a museum of so called miracles he would go to Bangalore to spend the rest of his life. As a parting shot he told me that for a man who was written off by astrologers when he was a baby, keeping himself alive for eight decades was an achievement by itself. He keeps reminding us that when he was born his father wanted his horoscope to be cast. No astrologer was willing to do it as they all declared that this baby would not live for more than a few days! The very fact that he is alive, he said, is proof that astrology is bunkum.