If you think that sin and the Indian Railways have nothing in common, please stand corrected. The most recent entrants into the field of sinning are

our railways! While Indian Railways is not exactly known for it’s secular image, of recent, it has been advocating a Hindutva line which could put many of our saffron brotherhood to shame. While we have the typical things like people wanting to enter Puttaparthi have to pass below the pictures of the “lotus feet” of the local thug turned prestidigitator turned god-man who goes by the name of Satya Sai Baba, people visiting the Bangalore railway station have to put up with the pearls of wisdom of one Pt. Sri Rama Sharma Acharya who has an affinity for sin that could put a Roman Catholic priest to shame. He says that sin brings along disease, grief and down fall too! All the science text books and those of medicine have to be thrown into the nearest dustbin as we have a brand new theory for the cause of disease- sin!! If you think are these are the ads placed by someone else on railway property, you are wrong again. Railways, which charge astronomical sums for ads, have allowed these to be displayed free of charge. When I had visited the reservation building of South Western Railways at the Bangalore junction station recently I was surprised at this because I have been under the impression that the Indian Railways, being a government owned institution, has to adhere to the principals of secularism enshrined in our constitution- that is the state cannot promote any religious activity. But, here we have the ads of these organisations called Gayathri Pariwar, Bangalore and Shanti Kunj, Hardwar, occupying prime railway advertising space free of charge, ostensibly in the name of promotion of public interest. 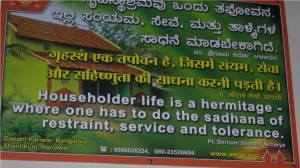 One fails to understand as to how public interest can be served by misleading people by telling them that sin causes disease! This concept which went out of the window along with many such primitive concepts has been now publicized by the railways at the cost of the state promoting religious activity in a public place. It is not that this above mentioned Pt. Sharma has come to original theories about the cause of disease. He has many other pearls of wisdom to his credit; the way these are scattered around Bangalore railway station it seems that he is the originator of a lot of conventional wisdom, original theories about almost everything under the sun. He also says that the coward dies many times in a day while the brave faces death only once. Perhaps, the coward undergoes rebirth after each of these deaths which, according to our great Pandit, happen at least four times a day! We are also informed that the householder life is a hermitage where one has to do the sadhana of restraint, service and tolerance.

Well, Indian Railways, how about putting a few of our rationalist, humanist slogans free of charge, like:

Probably there is no god so enjoy life.

Disease is caused by a number of factors, dietary, environmental and genetic.

Hands that help are better than lips that pray.

I think there are quite few more we can suggest. I do request all concerned to email the South Western Railways general manger about our proposal. We would make the color flex prints and put them up prominently so that people could be better informed. At least these could be secular and not promoting an individual or a sect.

Well, we do need a clarification from the South Western Railways as to how such ads masquerading as pearls of wisdom could be displayed on railway property in a nation which is secular and in which no government institution can promote religious activity. 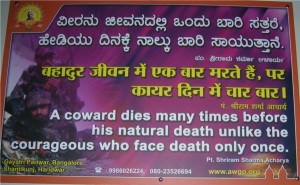 Update: Here is the contact information for the public relations office of the South Western Railways:

Commenter Jayalakshmi has provided the URL to a government Grievance Forum where you can send your complaints. http://pgportal.gov.in/