On 22 July 2009 part of India is going to witness a total Solar Eclipse. Scientists from India and abroad have already started arriving at various places lying in the path of the total eclipse with their equipments to study this celestial spectacle. Scientifically aware common people are also waiting for this moment with their eclipse-viewing glasses, pinhole cameras, and reflectors including ordinary mirrors. It is indeed a spectacle to be witnessed and experienced.

At the same time in India we have the largest number of superstitious masses, fear-mongering astrologers, and religious preachers who treat this beautiful natural phenomenon as a bad omen. Hiding inside their homes, they stop eating and drinking anything during this period. The pregnant women fear to venture out. The really religious ones throw away the cooked food, as the eclipse would make them inedible! They conduct pujas at their homes and in temples and take a dip in their ‘holy’ rivers and ponds to cleanse themselves of the ‘evil’ effects of the eclipse, when their pet god is being swallowed by the demons!Some astrologers and other diviners have already come out with predictions about earthquakes, tsunamis, deaths, pestilence, thunderstorms (this prediction is definitely going to be on the mark, as we are in the middle of the monsoon season!) and what not! Others of their ilk (the more pragmatic of the lot) are waiting for the moment to pass to ‘predict’ past events accurately! You will learn about their ‘accurate predictions’ in the newspapers and journals, satellite channels and cable TVs, within a few days after the eclipse!

Some of us ‘progressives’ (modern and post-modern, especially the later, though their fortunes are in a declining phase for some time now) are 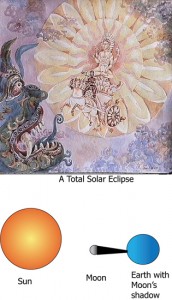 inclined to treat these antics of these believers as innocent rituals and try to belittle the attempts of rationalists and skeptics to educate the people about the scientific facts about eclipse.

Well, I don’t subscribe to this view. And for a very good reason.

As a fifteen year old boy, I was witness to a particularly tragic event on the day of a total eclipse in India in 1980. One of my relatives (my youngest aunt’s elder sister) was in the advanced stage of her pregnancy. She was with her parents in a remote village in Kannur district of Kerala. In the runup to the day of the eclipse (the eclipse was not total anywhere in Kerala), the local Malayalam newspapers and other periodicals published all sorts of ominous predictions and illiterate opinions by astrologers, fortunetellers, and quacks. This scaremongering built up extreme anxiety in my relative, who, just like any other expectant mothers, was now worried about her unborn child. And on February 16, 1980, the day of the eclipse, she, an otherwise healthy lady, died out of shock, leaving behind her two year old daughter (who is now happily married). This tragic death could have been avoided, had the young lady been given the correct scientific information about what an eclipse really was; had the newspapers resisted their inclination to give space to the ignorant opinions of astrologers and other crooks. I am sure innumerable similar incidents, though not always as tragic, might have taken place in other families too during similar occasions.

Though what causes an eclipse has been taught to every school-going kid in India as part of their elementary science education, they unfortunately continue to be, even after they are grown up, in the grip of every other weird idea handed over to them by their parents and other elders at home. And they try to justify their beliefs by taking recourse to some half-baked ideas about science and by using scientific vocabulary. They justify, for instance, the practice of not consuming anything during an eclipse by claiming that the food would become impure as it would be contaminated by germs in the absence of sunlight! Phew! Leave aside the silliness of their argument, these are the same people who gorge upon panipuris, samosas and jilebis swarming with flies at extremely unhygienic roadside stalls!

What could explain this strange behavior of the people who steadfastly cling to these irrational (and sometimes dangerous) beliefs handed down to them through generations, though they know from their school textbooks how an eclipse actually occurs? I can think of two reasons. And these reasons are equally applicable to the persistence of certain other weird ideas too amongst educated people.

First one has to do with the way the science education is imparted in our schools. The scientific facts taught in schools have rarely been linked to the day to day life of the students. The science textbooks hardly ever make any critical examination of the traditional beliefs of the people for whom the schools function. This is more so if the belief in question is even remotely linked to any religion. On the contrary, the unsubstantiated miraculous exploits of religious figures are taught as part of the students’ language and social science curriculum. I remember being taught during my school days about the miracles performed by Krishna, Jesus, and Mohammed (Oh, how secular we are! Aren’t we?!). Most of our teachers (with a few exceptions, I should add, because I myself had a teacher – P. Narayanan – who made science a delicious subject to learn) rarely venture outside the 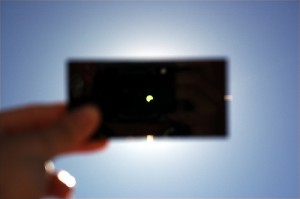 school syllabus. When they teach about eclipses, they never try to explain to their students how that scientific knowledge negates the magical, religious beliefs about eclipses. Given this, is there any wonder the students continue to entertain rubbish as a facts and practice nonsensical rituals even after they are grown up?

But how does one explain highly educated people falling for such irrational beliefs? The second reason I can think of has to do with this. And here I would rather summarize the points made by Michael Shermer, coloumnist for the Scientific American and the editor of The Skeptic. In his widely read book, Why People Believe Weird Things (Henry Holt and Company, 2002), Shermer writes about people believing in UFO, alien abductions, near-death experience, etc, “smart people believe weird things because they are skilled at defending beliefs they arrived at for non-smart reasons”. By ‘smart people’ Shermer means the highly educated and seemingly intelligent class of people. According to Shermer, high or low intelligence is statistically unrelated to and independent of the weirdness of one’s beliefs, but it is highly relevant when it comes to defending one’s beliefs. “High intelligence”, he writes,

“makes one skilled at defending beliefs arrived at for non-smart reasons…… smart people are better at rationalizing their beliefs with reasoned arguments, but as a consequence they are less open to considering other positions. So, although intelligence does not affect what you believe, it does influence how beliefs are justified, rationalized, and defended after the beliefs are acquired for non-smart reasons”.