I was accompanying Prof. Narendra Nayak on his tour of MP and Bihar, conducting workshops exposing the miracle-men (and women!). Itarsi was reeling under scorching heat. We regularly gulped chilled bottled water to get some relief from the debilitating heat. Power cuts and load shedding – scheduled and unscheduled – added to the misery of the people. Business establishments – including roadside juice parlors – had installed diesel generators to get over the frequent power cuts. Sitting there in a tiny room in President’s Hotel, opposite Itarsi Railway Station, I could hear the booming sound of generators. I read in the newspapers that the whole of the State was similarly affected from a delayed monsoon. Wells and lakes had dried up. The Hitavada reported (June 19, 2009, Jabalpur edition) from the state capital, Bhopal, that the water level of Upper Lake, the life-line of the city, was at 1674ft- the lowest in its recorded history. In many parts of the city, police were called in to control the crowd collecting drinking water. It is thus only natural that the state government explored all available avenues to lessen the hardships of its people or at least to divert the wrath of its citizens.

Unfortunately, instead of resorting to a prudent scientific water management practices, the government, now ruled by BJP, has been performing obscurantist rituals to have rain in the state. In the year 2008 too, Soma Yagnas were held at ten different places in the state by the ascetics of the 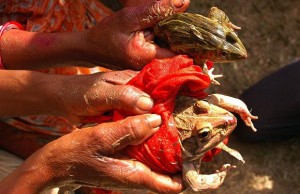 Shree Yogiraj Veda Vigyan Ashram of Sholapur in Maharashta at the invitation of the government. (Shockingly, the MP Council of Science and Technology had granted Rs.800, 000 for organizing the yagnas under a scheme “Scientific authentication of traditional/indigenous knowledge”!) The Ashram subsequently claimed a success rate of 70% in bringing rain last year! The Bundelkhand region of the state, the Ashram authorities claimed, which was “hit by drought-like conditions during the previous three years received excess rains” after pleasing the rain-gods! (In Mangalore last year a group organized a wedding of frogs to bring rain. And, lo, it worked! But, when the region received rain far in excess of the regular rain fall, Prof Narendra Nayak suggested divorcing the amphibians to bring down the rain fall within the required level! Unfortunately none heeded to his advice!).

Is there any truth in the claim of the Ashram authorities that their yagnas brought rains to the parched regions? Though this can easily be verified by going through the data collected by regional Meteorology Centres, our newspapers that are enthusiastic in giving ample space to all sorts of ritualistic nonsense – especially those related to religions and gods – are generally averse to disseminating such information. Sravani Sarkar, Bhopal correspondent of the Hindustan Times, however did precisely that. The correspondent gathered the relevant rainfall data from the Regional Meteorological Centre, Bhopal. And the data entirely contradicted the claims of the Ashramites! I reproduce below the data published by the newspaper on June 16, 2009.

One can see from the above table that the percentage of rain fall in seven out the ten regions where the yagnas were conducted were in fact negative! It is evident that the rainfall has nothing at all to do with the yagnas. Yet the Ashrm claimed success by highlighting the rain received in Bundelkhand region and fooled the government into believing so! As usual the believers, following what is called Confirmation Bias in Cognitive Psychology, forgot the negatives. Had all the regions received normal rainfall last year, the organizers of the yagnas would definitely have taken credit for that too.

Was this the claim by the ashram spokesmen that persuaded the government to go ahead with the yagnas this year too? Or was it just a reflex-action of the ruling political party which feeds on the obscurantist ideology of Brahmanism? Perhaps both. Whatever be the reason, the Chief Minister Shivraj Singh Chouhan has once again officially hosted a set of yagnas at various parts of the state to please Varuna, the rain-god. According to the Hindustan Times (Bhopal, June 16, 2009), the yagnas were held at ten different places (see the table below) across the state between February and April this year. Chouhan invited the very same ascetics of Shree Yogiraj Veda Vigyan Ashram of Sholapur and organized the Soma Yagna on February 4, 2009 at his official residence. The Chief Minister then took a ritual ‘sankalpa’ (expression of determination of will) during the yagna as it was necessary, according to Govind Narayan alias Nanaji Kale of the Ashram, for the ruler “to take the sankalpa for the yagnas to become successful”.

You will notice that the predicted periods of rainfall lies well within the monsoon season (June to September) of India, which generally receives good rain during this period. These yagna-jokers (well, crooks!) make use of this common knowledge and conducts yagnas to coincide with the season. If it rains, they will take the credit. If it doesn’t, well, they don’t care. Because they know from experience that their credulous followers – including politicians and bureaucrats who arrange these yagnas – would soon forget it before the end of the year and would flock back to them next year!

It is not only the rightwing political outfits like BJP and Shiva Sena that take to religion-based nonsense, but also the centrist parties like the Congress who happily indulge in them. The Hindu reports (July 05, 2009, Vijayawada) that the Congress government in Andhra Pradesh headed by Dr YS Rajasekhara Reddy, a Christian, organized a three-day “Varuna Yagam” at the Exhibition Grounds in Hyderabad between July 2 to 4 to invoke the blessings of Lord Venkateswara for good rain. The Chief Minister “carried ‘pattu’ clothes on his head over the pathway in the huge pandal where the sacred fire was lit and presented them to the presiding deity – the idol of the Lord which was brought from his abode at Tirumala”.

Though the Article 51 A (h) of the Constitution of India enjoins the citizens of our country “to develop the scientific temper, spirit of enquiry, and reform”, it is unfortunate that the rulers in the majority of our states blatantly flout this fundamental duty by espousing all sorts of nonsense practiced in the name of religion and god at the tax-payers’ expense. We, the rationalists, have no time to rest; we should reinvigorate our efforts in reaching out to the masses to impart scientific temper. This is not a question of one’s belief. The lack of critical thinking in one area of human affairs such as religion, undoubtedly has an adverse impact on other areas too – political discourse, for instance.