Update: This is the sixth part in the series. Here are links to all the parts of Narandra Nayak’s rationalism tour of India: Intro,  Part 1, Part 2, Part 3,  Part 4 and Part 5.

After having two training programs,organized by NCSTC at Uttarakasi and Hardwar (please see- A Nastik in Devabhoomi) I went to Bangalore from Delhi. There we had a training program under the aegis of the Bangalore Vicharvadi Sangha at the Ashoka Shishu Vihar, Bangalore. The participants in this series conducted from the 16th to 21st of April, numbered around 25. Their ages were from 14 to 70! We had students and retired senior specialist doctors as well as housewives and some affected by black magic too! There were the members of the Bangalore orgnization – A.S.Nataraj, Manoj, Subba Rao and others who were ready to provide services to the participants as well as take the training themselves. At the end it was the younger generation which stole ththe show, two young girls and the youngest boy put up a wonderful performance of what they had learned!

Since after this the greatest of the Indian shows – the general elections – had begun, and we were busy with our challenges to the astrologers, I had a break from the constant traveling. During this time we had the interesting encounters with the chelas of Ashwini which have been already reported in detail.

The next round of tours in the company of T.V. Manoj, the editor of Bangalore Skeptic and contributor for Nirmukta, started on the 16th June with a training program at Itarsi organized by Eksila, a group of teachers interested in training tribal youth to be demystifiers of miracles and paranormal 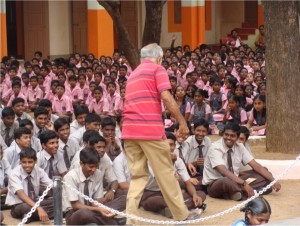 phenomenon in their villages. Rajesh Parashar and Malliaha were the two very interested organizers who took great pain to see that all arrangements were made. The inauguration was done by the divisional commissioner who promised us all cooperation from his side. It was a five day camp held at the Patrakar Bhavan, Itarsi, with about 30 tribal boys and girls taking an active part. They were all young and enthusiastic. Some of them had passed 12th standard and were unable to continue their education because of lack of resources to travel from their villages to Itarsi for the course of the education. The free education promised by the government would not cover these expenses. But some had applied for degree courses and had the finances to pursue them. They were trained in the usual god-man tricks and were also given a good background of the theoretical aspects too. On one of the days we were invited to Bhopal to have an interaction with tribals who had come from many villages from Madhya Pradesh to participate in a world tribal film festival. Though these interactions took place at around 10 pm and after a hard day’s travel from their home villages, the participants were very enthusiastic in their responses as many of them had been taken for rides by performers of such tricks. On the 19th June the concluding program was held at a home for orphans called as Muskan. Some of participants were very keen to take the knowledge gained here to their fellow tribals. The main deterrent to this is the lack of financial support. A sum of Rs.25,000 could support one tribal who could do the work for a year. If double this amount could be raised, one boy and girl could do that work, going to the village weekly markets and conducting at least 4 to 6 programs a month. This is a proposal that we could all think about. It could be tried for a year and the results noted. The program itself was possible by finances granted by the International Humanist and Ethical Union (IHEU) through the Social Development Forum, New Delhi. The participants had to be paid their travel expenses and provided with lunch. The program was also heavily subsidized by the local journalists association who had generously allowed the use of their spacious hall for a token rent of Rs.1000 for five days. The events of each day were covered very well by the local media, including the local cable TV network which telecast a 30 minute documentary on the training program. 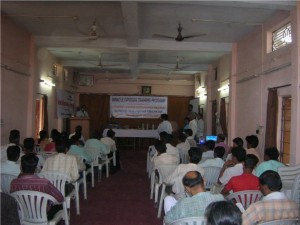 On the 20th of June we reached Patna where we were joined by Jacob Copeman a research scholar at Cambridge University who wanted to write a book on the rationalist movement in India. He was to accompany us for the whole of the Bihar leg of the tour. The first training program of four days was to be at Banka, a district head quarters town about 250 kms from Patna. The training program conducted by the district branch of the Science for Society, Bihar (which is a member of FIRA) was for the local school teachers and others, including some young students too. This was a four day training program. On one of these, since many of the teachers had to participate in a government sponsored program of the Chief Minister of Bihar, we had to start the proceedings at 6am and end at 11 am. However, we made a trip to a nearby school to interact with the girl students there. We could also make a trip to a local bore-well whose waters were supposed to cure all disease as claimed by some of the locals. But, we could not find any evidence of such claims as every one of the crow who took drinking water from this well said that they were taking the water from there as it tasted very good. The water was quite cool and tasted better than that of one a few meters away which stank of iron salts. This was a myth like many others! It is not that the area free from such. We also visited a Mandar Parbath nearby where the mythological churning of the sea of milk is supposed to have taken place, in which the Gods and demons churned a sea of milk to make things like amruth, kamadhenu etc.!

On the 26th of June we reached Lakhi sarai where another training program had been fixed by the district unit of the Science for Society, Bihar. The 35 participants for this program were teachers from the various schools nearby. One day allotted to the nearby city of Bhagalpur could not be utilized by them as the schools had been closed due to the prevailing heat wave conditions. This heat wave was to follow us throughout our tour, though the rains provided some relief on the last few days. The training program was held at the premises of the teachers association, which had generously provided all facilities including a standby generator. In Bihar the electricity supply would be off for more hours than it was on and the sweltering heat would sap everyone’s strength within minutes. The standby generators made a clatter loud enough to wake up the dead! In fact, in the whole of Bihar we are yet to see a generator which could run silently.

After the training program at Lakhi sarai, we went to the next district head quarters at Sheikpura. Here we had programs in a school and for the teachers at the office of their association. On the 2nd of July, we proceeded to the next district head quarters at a place called Navada. Here we were to conduct an introductory program for the members of the local unit of the Science for Society, Bihar. However, before that started we had a 30 minute interaction with the girls of the school where the program was to be conducted. Some of them were so much attracted by our presentation 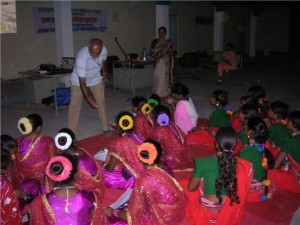 that they refused to go home though it was declared a day off, and they sat with us for the full program asking questions more enthusiastically than the participants for whom it was intended! The last day in Bihar was at Gaya where we had a preliminary program for the members of the district unit of the science for society, Bihar. The last day of this tour was at Chennai where programs were conducted in Tambaram at Corley school and St.Marys High School. The instructions at these schools were very strict- no mention of God should be done! However, that was no problem to us at all as we never deal with the existence of the non-existent! Again, in schools we have to be very cautious about what we say, since the managements may have problems with parents too! So, here the message of scientific temper has to be put forward in a manner acceptable to all! However, the students do start thinking about things, and that is one step forward!

This tour did not have any incidents of supernatural occurrences except for one at Itarsi. A lady from a nearby hill-station was very keen to talk to me. She reported that in her house, after the death of her husband, many strange things began to happen. It was her contention that every night there would be a clatter in the kitchen, but none could be seen. She had also brought vessels which she claimed had strange markings. Neither Manoj nor I could make out anything strange about them. She also claimed that her daughter was the one who was the most affected by these bizarre happenings. When I indicated that I would like to speak to her daughter before coming to any conclusion, she informed me that the very same day she would send her to meet me. That never happened! So, we could not make out what her intentions were. The whole case was a mystery to us!

Update: This is the sixth part in the series. Here are links to all the parts of Narandra Nayak’s rationalism tour of India: Intro,  Part 1, Part 2, Part 3,  Part 4 and Part 5.