Editor’s Note: When powerful organizations promoting pseudo-science are threatened with exposure, they often react by suing their accusers. These groups have realized that the only option left to them when confronted with the lack of evidence supporting their wares is the suppression of the right of scientists and journalists to reasonable criticism. This is true in the case of Simon Singh, a British science writer who is being sued by the British Chiropractic Association for exposing the dangers of and lack of evidence supporting the efficacy of chiropractic healing techniques. 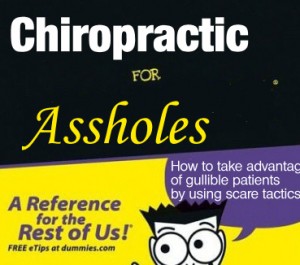 The case in question begins with the publishing of an article by Simon Singh in The Guardian, in which he points out the lack of evidence for many of the claims of  chiropractors. The British Chiropractic Association, instead of providing The Guardian with the evidence they requested, has decided to sue Simon Singh for libel. The case has gained a lot of attention among skeptics, medical professionals and those concerned with the right to criticism of ideas that are not based on evidence. Hundreds of blogs and newspapers have written about the story, mostly in support of the science writer. Celebrities like Ricky Gervais have come out in support of Singh. Here is more news on the public reactions to the case.

The main strategy involved here is intimidation. The BCA wishes to scare all those who dare to question the evidence (or lack thereof) into cowering down. These are tactics often used very effectively by cults like Scientology. Narendra Nayak, in shining light on the failure of the psychic claims of the Dhyan Foundation and Yogi Ashwini, was threatened to be sued by the goondas in that organization.  We proudly reported on that story. When Johann Hari’s story in The Independent sparked a controversy in India when it was republished by The Statesman, and the Editor and Publisher of that newspaper were arrested in Calcutta, we published that story and urged others to also reprint it. This is now an important aspect of websites that are critical of protective ideologies that use the muscle of the law rather than free and open discourse in order to silence science-based dissent. The point is to make these organizations aware that their tactics will only lead to an increase in the publicity that these stories get. The pseudo-science will be scrutinized by millions and evidence-based criticism of the pseudoscience will be promoted to all corners of cyberspace by the work of an army of diligent rationalists. Continuing in that tradition, I implore all readers  who write blogs to publish the entire article (The original has been deleted but a cached version is available online here) in support of Simon Singh and in support of removing legislative intimidation in disputes involving the scientific analysis of ideas.

This is Chiropractic Awareness Week. So let’s be aware. How about some awareness that may prevent harm and help you make truly informed choices? First, you might be surprised to know that the founder of chiropractic therapy, Daniel David Palmer, wrote that, “99% of all diseases are caused by displaced vertebrae”. In the 1860s, Palmer began to develop his theory that the spine was involved in almost every illness because the spinal cord connects the brain to the rest of the body. Therefore any misalignment could cause a problem in distant parts of the body.

In fact, Palmer’s first chiropractic intervention supposedly cured a man who had been profoundly deaf for 17 years. His second treatment was equally strange, because he claimed that he treated a patient with heart trouble by correcting a displaced vertebra.

You might think that modern chiropractors restrict themselves to treating back problems, but in fact they still possess some quite wacky ideas. The fundamentalists argue that they can cure anything. And even the more moderate chiropractors have ideas above their station. The British Chiropractic Association claims that their members can help treat children with colic, sleeping and feeding problems, frequent ear infections, asthma and prolonged crying, even though there is not a jot of evidence. This organisation is the respectable face of the chiropractic profession and yet it happily promotes bogus treatments.

I can confidently label these treatments as bogus because I have co-authored a book about alternative medicine with the world’s first professor of complementary medicine, Edzard Ernst. He learned chiropractic techniques himself and used them as a doctor. This is when he began to see the need for some critical evaluation. Among other projects, he examined the evidence from 70 trials exploring the benefits of chiropractic therapy in conditions unrelated to the back. He found no evidence to suggest that chiropractors could treat any such conditions.

But what about chiropractic in the context of treating back problems? Manipulating the spine can cure some problems, but results are mixed. To be fair, conventional approaches, such as physiotherapy, also struggle to treat back problems with any consistency. Nevertheless, conventional therapy is still preferable because of the serious dangers associated with chiropractic.

In 2001, a systematic review of five studies revealed that roughly half of all chiropractic patients experience temporary adverse effects, such as pain, numbness, stiffness, dizziness and headaches. These are relatively minor effects, but the frequency is very high, and this has to be weighed against the limited benefit offered by chiropractors.

More worryingly, the hallmark technique of the chiropractor, known as high-velocity, low-amplitude thrust, carries much more significant risks. This involves pushing joints beyond their natural range of motion by applying a short, sharp force. Although this is a safe procedure for most patients, others can suffer dislocations and fractures.

Laurie Mathiason was a 20-year-old Canadian waitress who visited a chiropractor 21 times between 1997 and 1998 to relieve her low-back pain. On her penultimate visit she complained of stiffness in her neck. That evening she began dropping plates at the restaurant, so she returned to the chiropractor. As the chiropractor manipulated her neck, Mathiason began to cry, her eyes started to roll, she foamed at the mouth and her body began to convulse. She was rushed to hospital, slipped into a coma and died three days later. At the inquest, the coroner declared: “Laurie died of a ruptured vertebral artery, which occurred in association with a chiropractic manipulation of the neck.”

This case is not unique. In Canada alone there have been several other women who have died after receiving chiropractic therapy, and Professor Ernst has identified about 700 cases of serious complications among the medical literature. This should be a major concern for health officials, particularly as under-reporting will mean that the actual number of cases is much higher.

Bearing all of this in mind, I will leave you with one message for Chiropractic Awareness Week – if spinal manipulation were a drug with such serious adverse effects and so little demonstrable benefit, then it would almost certainly have been taken off the market.

Simon Singh’s account of the story in his own words.