When yours truly was questioned at a press conference as to what his predictions would be for the Lok Sabha elections of 2009, the reply was that one thing would be proved for sure in this election. I said it would be difficult to hazard a guess as to who would come to power and which candidates would be victorious. But, one thing I said I could predict that was that astrology would prove itself to be a super flop this time too. That was one prediction that came true. If one recalls we have been repeating these challenges for nearly two decades since 1991, whenever elections happen. The reward money started at one lakh and was increased to 10 lakhs from 2008 onwards. This press conference was held at the Mangalore Press club to announce the challenge to predict the election results of the Lok Sabha election. Though the challenge was directed at those who claimed to have supernatural powers, others were not barred from sending entries. For details of these challenges and the terms and conditions, go here. The terms and conditions are also outlined therein.

While the trouncing of the Bharathiya Janatha Party and the unexpected victory of the UPA was quite a surprise to many, it has come as a total dampener for those who had the powers of ‘prediction’. The total number of entries delivered to us was 400, including  the31 which were received after the last date for the receipt of entries, 16th of May, the date on which counting was done.

My prediction about astrology had come true this time as the following will indicate. Out of the 370 received before the 26th of May, 175 had predicted that NDA would win the election and L.K.Advani would be the next Prime minister. The next in the list was Manmohan Singh whose name was proposed by 99 entrants who had obviously stated that the NDA combination would come to power. Next in the list was Rahul Gandhi with 14, Pranabh Mukherji with 9 and Sonia Gandhi with 7 proposers. Mayavathi’s name was mentioned by 12 who had predicted that the third front would gain power this time. Deve Gowda, Jayalaltiha had their handful of supporters. While some individuals had predicted our own Kumaranna, Prakash Karat etc., one of the Advani admirers had stated that Narendra Modi would be taking over from him after a year or so! 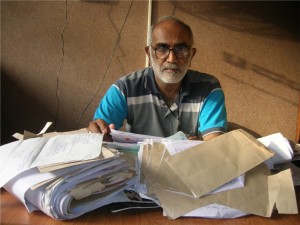 Another thing of note was that obvious leaning of the people depending on their religious beliefs. Most of the astrologers were Advani supporters and also many of the others carried their Hindutva on the entries with slogans like Jai Sriram, Om, invocations to their respective deities or swamijis etc. The minorities were solidly behind UPA and most of their entries were pro-congress, naming Manmohan Singh as the next prime minister. The techniques claimed to have been used by those who sent their entries were many.  Some of them had no claims to any supernatural power; they were only guessing and trying their luck Some Muslims claimed that their predictions were by the power of Allah. One of the Christian entrants prophesied that his was the voice of God, and he had also enclosed claims about the previous times when he had predicted things by this power and they had come true. However, though this voice was right about UPA and Manmohan Singh it was a total flop when it came to specifics. The voice was very much silent on these and hence this entry had to be disqualified. One of the entries from Uttara Kannada asked us to send him 3oo rupees for having sent the entry, if he did not get the prize. Another from Shimoga was from a young man who claimed that his family had lost everything due to involvement in politics, I should hand over the 10 lakhs to him which could set right their financial problems. Many had also awarded votes to one Sheena Rai whose name was listed as a candidate for Kasargod Lok Sabha constituency and had not even filed his nomination. Some predicted that he would win by a huge margin! He, as well as a non existent party called the Bharathiya Samjawadi Party, were treated as real entities by the astrologers! The party was allotted anything from 20 seats to a single seat by the entrants.

While most of the predictions were total flops, one from Chitradurga had 6 right out of the 25 answers and got the highest marks. The entry did not state which supernatural power was used to predict and hence we can safely assume that it was guess work. Another welcome aspect was that the wide publicity accorded had us receive entries from places as far as West Bengal. Though most of them were from Karnataka, and some were from Andhra, Tamilnadu and Kerala. Our member organizations had their own contests, one from Hyderabad with a one-crore-rupee award and another one from Kolkatta promised an award of 25 lakhs.

This miserable performance by the astrologers and also those who try to predict things using supernatural powers should be an eye opener to the gullible people who tend to make decisions based on the advice of such people. I retain my money, which shall continue to be at stake  in future contests testing the claimants of supernatural powers.