This article has appeared in The Telegraph.

BJP has worked hard to create the impression that it is not pursuing an aggressive Hindutva agenda in the 2009 Lok Sabha election. It has made good governance, development and security its election plank, and has promised to give us a majboot neta, nirnayak sarkar. Old Hindutva favorites like the Ram temple, Ram Sethu and the much- beloved “cow and its progeny” do make an appearance in the party’s manifesto, but they are clubbed together under the unobjectionable idea of “preserving our cultural heritage” and tacked at the very end.

But like a leopard can’t change its spots, the party of saffron can’t turn saffron, green and white without losing its very reason for being.

The truth is that in this election, the BJP has pursued a Hindu agenda which, in the long run, may prove to be far more radical than the hot-button issues that we are all familiar with. The new agenda can best be described as Hindukaran of voters, that is, making voters vote as Hindus First.

The work of Hindukaran is more subtle than the in-your-face Ram mandir agitation of 1990s. It is taking place through yagnas, kathas and yoga-shivirs held in temples, ashrams and public meetings, often presided over by popular and supposedly a-political gurus and “saints” whose spiritual discourses could well be lifted out of the writings of the Sangh Parivar. In many of these meetings, people are urged to take an oath to vote for the party that takes care of “Hindu interests.” This is not very different from what happened in the United States in 2000 and 2004 when evangelical preachers used their pulpits to urge their congregations to vote for the party of “traditional values,” whose representative was none 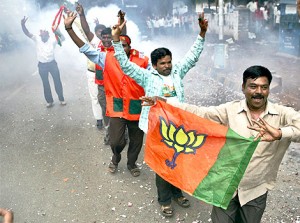 other than George W. Bush.

No one can predict just yet if this so-called Hindu vote bank will come through for BJP. But whatever the outcome, election 2009 will be remembered as the first time when a serious coordinated attempt was made to create a Hindu vote bank. It is important, therefore, to create a public record of this phenomenon.

A good place to start would be the letter L.K. Advani wrote to 1,000 sadhu-sants within days of days of releasing BJP’s election manifesto. While the manifesto is lukewarm to Hindutva, Advani’s letter lays out the red carpet for the saints to come marching straight into the government. His letter promises to establish a permanent institutional mechanism for consulting the holy men/women to “guide politics, governance and other national affairs by the lofty ideals as enshrined in the concept of Ram Rajya.” In addition, Advani reaffirmed the promises made in the manifesto, namely, cleaning the Ganga, protecting the Ram Sethu and the cows, promoting spiritual tourism, and giving tax-exemption to all dharmic activities. So while the party promised good governance to the yuppie “Friends of the BJP,” it offered faith-based governance to its more traditional constituency.

Who are these raj-gurus-in-waiting that the BJP is so eagerly courting? What role are they being asked to play in electoral politics? This is where the plot begins to thicken.

The 1,000 sadhu-sants who received Advani’s pledge of allegiance were chosen from a hand-picked list put together by VHP. While the complete list remains a secret, we know that Sri Sri Ravi Shankar and Swami Ramdev received the letter, as did many other members of Dharma Raksha Manch, a VHP-managed forum that held its inaugural meeting in January 2009 in Mumbai.

Dharma Raksha Manch is the culmination of VHP’s dream of converting the vast majority of Hindus who are religious into a Hindu vote bank. The idea was first put forward in the 1980’s by Swami Chinmayananda, and later taken up with great gusto by Praveen Togadia, the current general secretary of VHP.

Creation of Hindu vote bank required a two-step action plan which was hammered out in various dharam sansads held over the last five years or so. Step One was to put forth a Hindu Charter of demands and get a political party to formally accept it. Step Two called for organizing grass-root campaigns in which at least 50,000 voters in each Lok Sabha constitutency were to take an oath to vote for only that party that accepts the Hindu Charter. The action plan also called for unleashing the power of popular gurus and kathakars who have a mass following among the moderate middle classes who may be turned off by communal issues, but who may yet still be mobilized to vote for their “Hindu interests” in say, propagation of yoga, cleaning the Ganga, preserving the Ram Sethu, defeating “Islamic terrorism” etc.

The Sangh Parviar has executed this plan to the very last dot in this election. In late January, VHP and RSS organized the Dharma Raksha Manch in Mumbai which gave the pride of place to popular gurus including Swami Ramdev, Rameshbhai Oza, Sadhavi Rithambara and Asaram Bapu. In March, the Manch came out with an 11-point Hindu charter. Within days, BJP announced that it had included all the 11 demands in its manifesto. This was followed by Advani’s fawning letter to 1,000 sadhu-sants for which he won great praise from Swami Ramdev, Sri Sri Ravi Shankar and other Sangh Parivar representatives.

All this set the stage for the Step Two. VHP’s Ashok Singhal declared that since BJP is the only party that has accepted the demands of the saints, 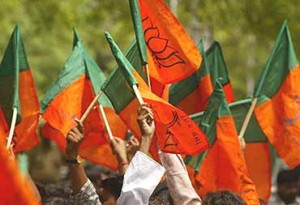 the saints will henceforth “educate the voters by touring even the remote villages to vote for the BJP.”

And that is precisely what the “saints” have been doing, especially in the communally sensitive areas of Karnataka and Orissa. In mid-March, Mangalore, the home-turf of Sri Ram Sene, saw a huge samajotsva ( a social festival) organized by Dharma Raksha Vedike, with full support from the state where participants were asked to take an oath to only vote for pro-Hindu candidates/party (read BJP). As the elections approached and public rallies became difficult to organize, oath-taking moved inside temples: at least 100 yagnas were organized by temples all across the state where the presiding priests administered the oath to vote as Hindus.  Yagnas were also the ritual of choice for Ashok Sahu in Orissa, BJP’s candidate for Kandhamal, the site of anti-Christian riots last year: before he was arrested (and released on bail), Sahu went village to village conducting mahayagyas.

For their part, the supposedly a-political gurus have been on the same page as the Dharma Raksah Manch. Swami Ramdev, for example, has started his Bharat Swabhiman Andolan which has taken up BJP’s call for 100% voting and bringing back the Indian money stowed away in Swiss banks.  Sri Sri Ravi Shankar has long been active in Hindutva causes having to do with conversion and the state oversight of temples. These gurus with mass appeal have been a major conduit for mainstreaming the Hindutva agenda.

How effective has been this strategy of Hindukaran? We will know the answer shortly when the complete elections results are in.

Meera Nanda is the acclaimed author of several books on the growth of the Hindutva movement in India. Her previous blog posts can be found here.