Editor’s Note: Images for this report were contributed by Sanjay Karmakar and Anindyasunder. Report is by Sanjay Karmakar. Due to the graphic nature of the images, only a select few have been displayed here. You can view the rest here. 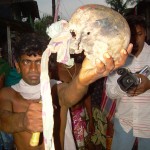 Have you ever seen people dancing, holding different parts of dead bodies in their hands? If not, then visit Kurmun, Parui, Palashie, Kubajpur, Arachi and other adjacent areas of those villages in Burdwan on the occasion of ‘Gajon’ which is held on Chaitra Sankranti ( Last day of the Bengali month Chaitra – last day of the Bengali year ). You will find hundreds of ‘Gajon Sanyasis’(Gajon monks) dancing holding parts of dead people, particularly the heads of the dead,  in their hands. Thousands of spectators assemble there to see the awe-inspiring dances of those Sannyasis (monks / ascetics). According to villagers, this practice has been going on for more than a hundred years. Police and district administration do very little to stop the ugly and unhygenic practices. Says the Superindentent of Police of Burdwan, Rajaram Raj Sekharan, ‘I have no knowledge of such incident. I’ll enquire about the matter and take necessary steps to prevent such activities’.

From where do the Gajon Sannyasis collect these bodies? According to one of these Sannyasis, they collect the bodies from different burial grounds. Those who could not  burn the dead bodies due to financial reasons, bury those bodies in the graveyard. Sometimes the relatives of dead children do not burn the bodies and bury them instead. The Sannyasis, collect these bodies from different places and hang them on trees. On the very day of Gajon, which falls in 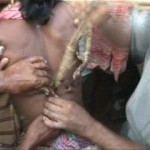 the middle of March, the Sannyasis bring these decomposed bodies from the tree and move from one village to another with the dead body in their hand.s Large number of people gather around the fair area and enjoy the gruesome scene.

Due to the practice of burying dead children, most of the bodies used are of children. Sometimes the decomposed head or skull is cut off . In the case of babies and small children the entire dangling carcass is taken along and danced with. Bad stench  from the decomposed body and the primitive ways of the sadhus create an ugly atmosphere. Even children are brought to witness this ‘festival’ called  ‘Gajon‘ . The whole scene is primitive and unhealthy, a kind of visual pollution.

According to the General Secretary of the central committee of Science and Rationalists’ Association of India (name of the organization in Bengali is “Bharatiya Bigyan O Yuktibadi Samiti) Mr. Prabir Ghosh, 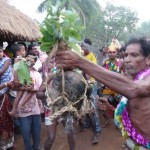 Myself, Sanjay Karmakar, acting as the joint secretary of the Rationalist’s Association, and my group in Burdwan district, have organized awareness programs in the area quite a few times.

“this type of dirty and unreasonable activities in the name of religion or tradition should be stopped immediately. These things adversely affect a child’s mind. We want to draw the attention of the local administration towards these criminal practices. Not only is exhuming dead bodies without  permission illegal, creating cruel and disgusting scenes in front of public eye comes under Public Nuisance Act and is punishable by law.”

Most of the images submitted for this article were deemed too graphic for civilized tastes. If you wish to see them you can do so here.