The long cherished project of Premanand- The Method of Science exhibition, was finally thrown open to the public on the 5th of March, despite of all the problems that he had to face. These problems, in addition to those already mentioned in the press release that follows, delayed the opening of his life time dream. These included problems such as lack of resources and the death of his brother Dayanand. In fact, Dayanand passed away on the 2nd of March, putting a question mark on the date of the inauguration. But, in keeping up with his stoic traditions and his commitment to the cause of rationalism, the grand old man of the movement refused to postpone the event. 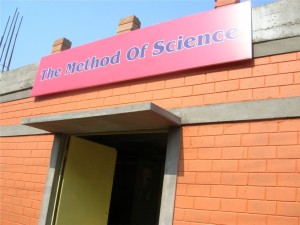 Anyway, the event was a totally informal affair. He had always said that the exhibition would be inaugurated by the first child who comes along at that time and it happened to be Aishwarya, a sixth standard girl – the daughter of an activist, K.S.Vijayakumar. She did that by walking in and declaring the exhibition to be open. So, after nearly three decades of delay, the method of science exhibition got a place of its own and a location where no one could disturb it.

On the first day about one hundred activists and members of the public came to visit along with journalists from the print media, some reporters of local and state level TV channels. When asked to make a statement he was his usual candid self. He said “I can now die 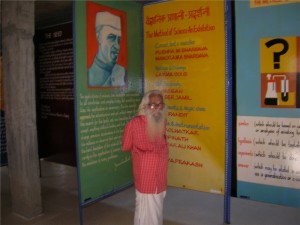 happily as I have accomplished all that I wanted to do. I have no attachment to life or death now!” He also remarked that the first floor of the building has been done by him, building the other floors and the rest of the project was a task for those who are going to take over from him.

Despite of his poor health and weakness he was busily going around conducting people round the premises and explaining the exhibits. It was certainly a tiring task as there are about 150 of them. His indomitable will kept him going and finally we had to escort him away supported by two persons- one on each side. But, the radiant smile on his face said it all- though the flesh is weak the spirit is strong!

B. Premanand, the founder of the Committee for the Investigation of the Paranormal of India, Patron of the Federation of Indian Rationalist Associations and the editor of the Indian Skeptic has finally realized his life’s ambition of the opening of the museum for the method of science. This is being thrown open to the public without any ceremonies or formalities on the 5th March, 2009 at the premises situated at 11/7, Chettipalayam road, Podanur.

His long cherished dream has been realized at a time when he has not very long to live. He had been suffering from cancer of the stomach which was operated upon in December, 2006. The doctors had given up hope then because of the post operative complications. But, he survived due to his tough nature and then set about realizing his life long ambition of building up this museum. Braving heavy odds like weakness due his illness, a contractor who absconded with his money and many such problems, he finally has got the exhibition ready. In June, 2008 he had to face one more problem- the development of secondaries all over the abdomen- the Doctors tried chemo therapy which did not have any effect, so he was told that nothing more could be done for him. That strengthened his resolve to go on and complete the project in the short time that was left or that is what it seemed.

This method of science project has a very long history- more than three decades. In 1975, the well known molecular biologist, the founder of the center for cellular and molecular biology, Hyderabad was requested by the National Council for Educational Research and Training(NCERT) to prepare an exhibition by which the method of science could be communicated to children. After Herculean efforts by him and his team of dedicated workers, by March, 1977 it was set up in Delhi, but could not be formally opened as the then Prime Minister Mrs. Indira Gandhi lost the elections. Her successor Morarji Desai was against an exhibition which taught the people to question the popularly held dogmatic beliefs. Hence the same could not be inaugurated- that was also partially due to the hidden Hindutva agenda which was being followed by this first no- congress govt. at the center. The material suddenly disappeared only to be discovered later in a damaged condition. At this juncture the Andhra Pradesh govt. decided to put it up, space was allotted and it was set up.

By this time Mrs. Indira Gandhi had come back to power and was willing to inaugurate it. However that was not to be. She was soon assassinated and the task was done by an eminent scientist Prof. M.G.K. Menon, FRS. A number of intellectuals and scientists attended the function which was also graced by the then Chief Minister of Andhra Pradesh Sri N.T. Rama Rao. At this stage, it was located in the State Public library of the govt. The explanations for the exhibition were to be done by volunteers. Subsequently, there were complications introduced due to the lack on staff to maintain it, the demand from the library to return the premises etc. So, it was decided to hand it over to the Birla Science Center at Hyderabad in September, 1992. However this center never took proper interest in the organization of the exhibition. The panels were not even assembled properly.

After this, in 2000 Premanand took interest in the same and promised to get it set up in Kerala. When they went to the Birla Science Center to check on that it was discovered that all the exhibits were damaged, the working models discarded and the material had been discarded as junk. This was the second time when the exhibition was sabotaged by the vested interests who had taken objection to the method by which scientific temper was being propagated. The objections were to the picturization of certain so called god men, so called religious beliefs and such by which many deep rooted superstitions were questioned. Some of the well known pseudo and non sciences like astrology, homoeopathy were also examined and the analysis of these affected the practitioners of such. Any way all these vested interests had entered into a conspiracy to destroy something which could create a bent of mind in the people to question. In the meanwhile, the films division had produced a documentary and many popular science magazines had run features on that. This exhibition had also received good write ups in many popular newspapers. But, none of these could save it. By this time it was in a state in which it had to be made anew.

Premanand having taken on the task of reviving it has after considerable expenditure and effort has finally managed to get it ready for display. He could not manage to get the working models prepared as it takes a longer time and technical know-how. But, the written material along with the pictures gives us the idea of what it had been and how it could have influenced the thinking of a whole generation of our country. If the non science and pseudo sciences are causing havoc in our country today, it is only because of the lack of scientific temper. In19 sections on the various methodologies of science the exhibition takes the visitor through the history of science, the development, the various personalities etc. The step wise presentation with clear illustrations makes it easy for a lay person to develop scientific temper after a single visit.

We do hope that the members of the public particularly school children make use of this to further their interest in science. It is to be made clear that science is not just technology- it is a way of life!