Are anti-blasphemy laws really on the rise? Consider this: Since the founding of the UN in 1948 till the year 1992, there was no mention of blasphemy in any form under the Declaration of Human Rights. The articles 7, 21, 18 and 19 could have been interpreted to reject the idea that blasphemy is a crime. Jump to half a century later; every year from 1999 to 2006 has seen new resolutions to restrict “Defamation of Religion” introduced through the Human Rights Council (UNHRC) by member nations, mostly Islamic. Since 2005, the UN General Assembly has passed a similar resolution every year. I’ll come back to the UN resolutions in a bit, but first I’d like to consider some recent developments in India.

[smartads] Two recent cases of human rights abuse by the Indian government have garnered much media attention. The first was the arrest of the editor and publisher of The Statesman on reprinting an article that first appeared in the UK. The second was the case of Ajith D, a 19 year old from Kerala. The accused were charged under Sections 153A, 506 and 295A of the IPC. Section 506 is concerned with making intimidating comments and was used in Ajith’s case, but doesn’t concern us here. Section 153A was used against the Newspaper editor and publisher. Here’s is what it says:

Section 153A: Promoting enmity between different groups on grounds of religion, race, place of birth, residence, language, etc., and doing acts prejudicial to maintenance of harmony.

Go here for the full statement of the law.

Section 295A is the most relevant of the three. Here is the entire section:

Section 295A: Deliberate and malicious acts, intended to outrage religious feelings or any class by insulting its religion or religious beliefs.

Whoever, with deliberate and malicious intention of outraging the religious feelings of any class of [citizens of India], [by words, either spoken or written, or by signs or by visible representations or otherwise], insults or attempts to insult the religion or the religious beliefs of that class, shall be punished with imprisonment of either description for a term which may extend to [three years], or with fine, or with both.

It was these two recent cases that got me into a dialogue with friends of our blog, Hindu Atheist and Nitwit Nastik, prompting me to do some research into the phenomenon of blasphemy laws. I had assumed that such outdated restrictions on speech and expression were slowly disappearing as the knowledge of our natural world grew. I was wrong.

How Blasphemy Laws were Born/Reborn: 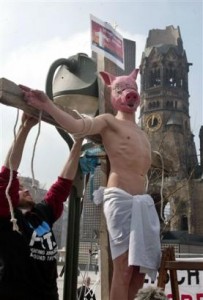 Pre-democratic societies had strict blasphemy laws. Offending religious sensitivities meant death in most cases. As times changed and modern democratic republics were beginning to take shape, the values of freedom of speech and expression began to matter more. Many European countries still had blasphemy laws on the books, but rarely implemented them. These were laws that were originally left in place to defend Christianity, and Christianity had become more benign a religion than it had been in the past. Go here, here and here for examples of blasphemy in the West (Warning: Images not suitable for sensitive people). The few cases that were brought to court in European countries were dismissed, with a couple of exceptions. Western countries today have an immense amount of freedom of expression. Just as it seemed as though the concept of blasphemy was disappearing in the Western world, a few events through the 1990s changed things at the level of international law.

In 1990 the Organization of the Islamic Conference(OIC) adopted the Cairo Declaration of Human Rights in Islam (CDHRI). In effect the OIC member nations had signed onto an agreement declaring Shariah law as the only guide to human rights. According to wikipedia, “Articles 24 and 25 of the CDHRI make all the rights and freedoms stipulated in it subject to Shariah and only to Shariah”. Protecting Islam against blasphemy is an integral part of Shariah.

The “Defamation of Religions” resolution of 1999 was first brought to the UNHRC by Pakistan, initially as the “Defamation of Islam” resolution. Suddenly Pakistan became the leader of the movement for anti-blasphemy UN legislation. But what history does Pakistan have for such ideas? Has Pakistan always restricted free-speech in these cases? 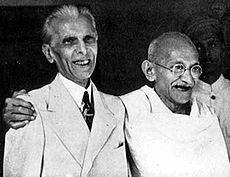 According to Muhammad Abdul Haye, in 1860 the British repealed existing blasphemy laws in order to allow missionary proselytizing. From the time after the partition of India and Pakistan in 1947, till 1982 when Mushtaq Raj published Heavenly Communism, there were no cases of blasphemy in Pakistan. During that period no anti-blasphemy laws were in place (my source does not mention if Pakistan had adopted Section 295A which was in place before partition). In the aftermath of the Mushtaq Raj case, Section 295C was added to the penal code in 1986. It reads:

Whoever by words, either spoken or written, or by visible representation, or by any imputation, innuendo or insinuation, directly or indirectly defiles the sacred name of the Holy Prophet Mohammed- Peace be upon him- shall be punished with death and shall also be liable to a fine.

Not only do you get to die, you also get to pay for your own execution! Today Pakistan’s courts follow 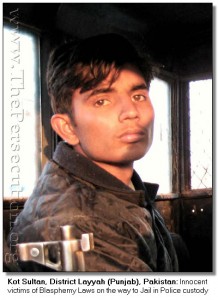 the strictest interpretations of the blasphemy laws, usually sentencing guilty parties to death or life in prison. Many of those convicted and killed are minorities of the Ahmadiyya Muslim community. The government has ruled that this group is not even allowed to proclaim themselves as Muslims. Many young kids have been killed by these laws.

Section 295A was enacted in 1927. Section 153A was not sufficient to prosecute the writer of Rangeela Rasoon, a book published by Rajpal (he was later murdered by an Islamic fanatic) that mentioned the prophet Mohammed in a negative light. The case was dismissed because 153A requires intent to cause communal harm. Muslim groups demanded that the supreme court justice who delivered the verdict, justice Dilip Singh, be sacked. Unsuccessful at that, they demanded that a law be enacted that would outlaw all religious insensitivity to Islam. In writing 295A, the framers were careful to insert a “deliberate and malicious intent” clause, in an attempt to ensure that those in pursuit of academic expression of ideas and those who hurt religious sentiment unintentionally or by accident were not to be prosecuted.

In 1957 the supreme court ruled that cases where malicious intent to outrage a religious group cannot be proven, Section 295A does not apply. The court stated

Despite this “malicious intent” clause, the law has been increasingly misused by Hindu and Muslim groups to defend their interpretation of religion. One famous case is that of M.F. Hussein, an artist awarded the second and third highest civilian awards in the country, who has had cases filed against him under sections 295A and 153A, for the treasonable act of painting nude Goddesses- a subject that is universally identified with ancient Indian art.

India has not passed any new blasphemy laws since independence, unlike Pakistan.

The Duplicitousness of Religion: 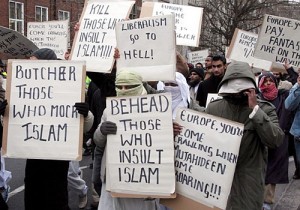 As stated above, the “Defamation of Religion” laws were initiated at the UN with the introduction of Shariah as a Human Rights issue at the UNHRC. Islamic countries managed to introduce a concept that would eventually lead to preventing legal criticism of ideas, under the banner of Human Rights! In effect, a fascistic ideology was labeled as a human rights cause.

To get an understanding of the sneaky strategies used by religious fundamentalists in pushing these laws, more analysis of the language used at the UN is helpful.

For 4 years in a row now the General Assembly of the UN has passed a non-binding resolution against “Defamation of Religion”, starting with Yemen’s introduction of ‘Combating Defamation of Religions’ in 2005. The resolutions that passed in December 2007 and November 2008 required the Secretary-General to submit a report on the implementation of the resolutions, including on the “possible correlation between defamation of religions and the upsurge in incitement, intolerance and hatred in many parts of the world.”

What!!! In an unbelievably heinous statement the resolution seeks to blame the violent acts of religious fundamentalists on those who criticize religion. It’s like saying that there’s a possible correlation between women walking around at night and the upsurge in brutal rapes and sexual assaults- and the law protects the rapists, not the women! The women are to blame for inciting rape and the rapists are the ones filing the charges.

Think about this. The religious organizations pushing for this MUST have actually sat down and worked out the wording of a UN resolution that would unequivocally transfer the blame of the crime from those committing it to those who knowingly or unknowingly trigger those who commit it.

The Objectives of Religion:

the unlikelihood of a supernatural God, an awareness augmented by education. Of course, that means that the resurgence in laws was preceded by a resurgence in blasphemy itself. Let’s look at religion as a natural phenomenon, as Daniel Dennett would. The tenets of any successful religion must be self-serving, in the sense that they must maximize the odds of their own survival first. In this sense, religions that demand anti-blasphemy laws are a particularly infectious case of parasite that get their hosts (us) to defend them (the religious beliefs) against other cultural memes.

Analyzing the scholarly interpretations of religions can only take you so far. The sociological effects of religion are best observed by studying how proponents of a particular religion behave over time. If the resurgence of blasphemy law worldwide is any indication, religions are twisting the ears of their rides and digging the spurs in deeper, in what they see as a last ditch effort to defeat that evil villain, secularism.

Update: Some facts that are presented here are now on freethoughtpedia. You can follow up on them here for information on the latest  push from the religious establishments regarding blasphemy laws around the world.