There was a protest meet held at Mangalore on the 20th Feb against violence in the name of “Protection of Culture”. These groups consisting of antisocial elements, had been holding the city to ransom for the past several years through various acts directed mainly against people who did not conform to their so called value systems. Though that was flaunted as the main motive, the members of the groups are basically anti-social elements trying to take advantage of the situation in which a pro-Hindutva party had come to power. These so called cultural police are not bound by proprieties and niceties such as civil rights or even the fundamental rights under the constitution. Theirs is the right of might. Anyone who protests against their modus operandi would be hounded, persecuted and even prosecuted by an ever compliant government machinery.

In just one month their activities have hit the headlines all over the world, fueled by the attack on a group of young women who were in a pub. Those attacks were made in broad daylight and in the presence of TV cameras who recorded for posterity the bravery of about fifty young males assaulting half a dozen females kicking and chasing them all over the place. In the past few years these very same groups going under the banner of various senas(armies) and dals(groups) have been deciding as to who can speak to whom, what people should eat, drink, dress and pray too! They have been attacking trucks transporting cattle for slaughter, assaulting members of the opposite gender who are interacting with each other, banning events like Valentine day etc. The police have been silent spectators to their antics, and often even their supporters. The people of Mangalore sickened by these antics have risen in protest.

There have been quite a few of them so far (refer- The Guardians of Morality). On the 20th Feb. a number of organizations decided to make a show of strength and also challenge them to come forward and dare attack. The meeting was conducted by the Federation of Progressive thinkers of Udupi and Mangalore. The people who addressed the meeting hailed from all parts of Karnataka and represented various communities and religions. Some groups who were not religious were also represented- for example the rationalist movement by various office bearers of organizations for the two districts and myself as the president of the Federation of Indian Rationalist Associations. There were political leaders, members of the legislative assembly, journalists and many progressive thinkers. Though there were few women present, Ex minister Mrs. Lalitha Nayak, Dr.Sabiha, a progressive minded rationalist activist and a lecturer at the Mangalore University and Mrs.Usha Yuvaraj were present on the dais.

The collective opinion was that the attack on the women at the pub, though could be called as a minor incident had made headlines nationally and internationally due to the brazen attitude of the attackers who dared to act in the full view of the media, which had been specially summoned by them. Soon after that a young girl from a nearby village committed suicide because she was dragged to the police station for speaking to a male who was a member of another community. Another young girl, a student of a local college and the daughter of a Member of the Legislative assembly of the nearby Kerala state had been kidnapped and beaten up, again for speaking to her class mate, a member of another community. All these incidents showed that these anti social elements could do anything and get away with it. They had the temerity to stop a bus carrying students of a college which had boys and girls from various communities going on an educational tour from their college. This was despite of the parents of the girls telling them that the girls were going with their permission. This incident had taken place bang in front of the Police Head quarters with the police standing as mute spectators. The same bus had to go on the next morning with two police escorts at the front and back. One can imagine the state of affairs if adult students of a college going on an official tour with the permission of their parents have to have a police escort!

These groups had tried a number of methods to stop this meeting including, threatening an elderly lady, Mrs. Lalitha Nayak an Ex-Minister of Karnataka with rape if she attended it .This was highlighted by her in her address. She was not angry but only lamented the state of affairs in which young men of the age of her grandsons made such threats. She also wondered as to what culture they were protecting with threats of that sort! The other speakers too, narrated their experiences and indicated their protest against violence in the name of protection of culture. They also spoke of various incidents which had taken place in which the constitutional rights of the helpless victims had been violated. Dr.Sabiha stated that the token presence of only a very few women at the meeting was due to the fear of attack by the rowdy elements. Though most of the people present were teetotalers, they thought that if any one wanted to visit a pub it was their personal matter as along they were adults and there was no compulsion of any sort. There was strong opposition to so called moral policing. Some of the speakers suggested that the members of the Rama Sene and Bajrang Dal could be sent to Afganistan where there was total prohibition on alcohol of any sort! Parallels were also drawn between what happened in Nazi Germany and it was rightly pointed out that though these Dals and Senas claimed that were patriotic Indians, the inspiration for their misdeeds had come from totally foreign sources like Nazi Germany, Pakistan and such religious fundamentalist nations. 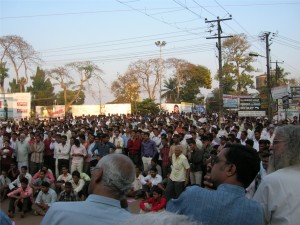 stated that though they would not initiate violence, they would not countenance it either. They promised to retaliate in the same coin any efforts to take away their fundamental rights by violent means. The attitude of the Mayor of Mangalore City was also heavily criticized. He had filed a criminal case against a minister of the   central govt., Ms. Renuka Choudhary, for making a statement that Mangalore had been talibanised. He was reminded that, six months before she had made the statement, an article under the heading Talibanis of Dakshina Kannada had been published in September, 2008 in a local eveninger- Karavali Ale. The Mayor was challenged to dare to prosecute the author of the same- Narendra Nayak, the President of the Federation of Indian Rationalist Associations. In my speech, I told the Mayor that it was my opinion about what was happening in the city and that I had more of a right to make that statement being a native of the same city and having been born much before him (the mayor). The story of the hounding of the owner of Karavali Ale is another saga of the fight of a determined man to preserve the freedom of press and expression in a democracy. Mr. Seetaram was hounded by the police, arrested and taken in handcuffs as if he was a dangerous criminal. He was finally released after a habeas corpus petition was filed in the Karnataka High court. The Member of Legislative assembly of a nearby constituency, the ex Home minister of Karnataka Mr. Ramanath Rai, promised the citizens present that the minister Ms. Renuka Choudhary would be invited to Mangalore to make that statement in public again and challenged any one to stop her.

It was evident from the gathered crowd that the citizens of Mangalore had enough of this cultural policing and gangsterism in the garb of that. Soon after this meeting the District administration started taking steps to extern some of those who had taken part in the attack on the women in the pub for the district. The President of the Sri Rama Sene who claimed credit for this act would be banned from entering the district. We have to wait and see if these steps will succeed in curbing the menace of these so called cultural police. It is time that the right minded citizens of this district express their opinion about this hooliganism and stop these activities. Cultural Policing and moral posturing can take place in a democracy as long they restrict themselves to peaceful democratic means of protest. Violence in the name of protection of culture cannot be tolerated in any civil society.