Editor’s Note: Meera Nanda is spending a year in Delhi at the Jawaharlal Nehru University. During this time she will be contributing stories of her experiences in the capital city.

This first of her entries from Delhi comes in the aftermath of some of the ugliest “moral policing” by the right-wing Hindu nationalists. A few days before Valentine’s Day this year a group of activists from the fringe group Sri Ram Sena attacked young women who were drinking at a pub in Mangalore. This incident was reported widely and it provoked young people all over the country to protest the attacks. One group, the Consortium of Pub-Going, Loose and Forward Women, with over 50,000 members on facebook, decided to send Pink Chaddis (pink underwear) as a form of protest to the leaders of the extremist Hindu groups.

The civil court building happens to be barely five minutes walk from my parental home in Chandigarh. Outside this house of justice, I witnessed the kidnapping of a young woman who had come there seeking justice.

The violence of the act – and how it was accepted by so many as natural, just and “for her own good” – revealed the ugliness of the City Beautiful. What I saw is very much on mind as I think about the recent protests to defend women’s right to go to pubs. I wonder if all the pink chaddis the protestors sent to shame the hoodlums of the Hindu right have anything meaningful to offer to that poor woman in Chandigarh. 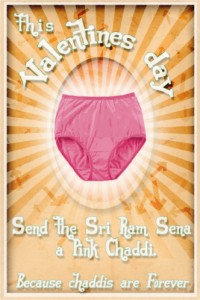 It was early February when I came to Chandigarh for a short visit. I was walking past the high court building on my way to the market around midday. A woman was walking in my direction. I would have passed her by without noticing her, but suddenly I heard her scream. Before I could figure out what was the matter, she began to run in the opposite direction. Just then I saw a huge white van stop by the curb. Burly young men- four or five of them – stepped out, and began to run after the woman. Within a matter of seconds, they had grabbed hold of the woman who was screaming and struggling. I saw them drag her by her hair into the van. Before I could unfreeze myself and try to take down the license number, they were gone.

Soon a crowd gathered. One of us discovered the woman’s handbag that had fallen off in the scuffle. The bag contained a cell phone which was dead, an attested copy of her school-leaving certificate (which put her around 20 years of age), some money and few knickknacks. We decided that we should take the bag to the police station near by.

Then a middle-aged Sikh man who was in the crowd spoke up. He told us that it was all right, it was all a ghar ki baat and nothing bad was going to happen to the woman. He claimed that he was her father and it was her brothers and cousins who had “taken her home.”

“How can you allow your own daughter to be treated like this? What kind of a father are you? Have you no shame?” I asked.

This is what he offered as the way of explanation: His daughter was having an affair with a Muslim man and that was not acceptable to him. She was a bright girl, he said, an engineering student, but this Muslim man was ruining her life. He said something garbled about a lawsuit the couple had filed against the family. It appears that she had come to the court in connection with the lawsuit and the family had been waiting for her.

It seemed to me that many in the crowd cooled down after they heard this “explanation.” But there were four-five young men who agreed with me that we have to take this man to the police station and report the kidnapping.

We narrated what we had seen to the policemen on duty. Then the old man started talking about the affair with the Muslim man, as if it were a crime. To show that he was not narrow-minded, he said that he would have had no objection to a chura chamar (an untouchable) but he could not accept the idea of his daughter marrying a Muslim.

His story had an immediate and a dramatic effect. The policemen were far more interested in the old man’s travails over this supposedly wayward daughter than the violence she had been subjected to. My pleas that the victim was past the age of consent and had the full right to choose her partner were met with total incomprehension. Madam, you don’t understand these matters, the cops told me. How can this poor man let his daughter marry a Muslim? Would I let such a thing happen to my daughter, they asked, without heeding my affirmative answer.

It was self-evident to these guardians of law-and-order that respectable women from Sikh and Hindu families should not marry Muslim men. In their eyes, the old man did the right thing by having her daughter nabbed.

It was also self-evident that these cops were not going to do anything to help. I insisted that they take me to their boss. By now, our group of eye-witnesses had dwindled to just two: myself and a young man. I pleaded with the inspector that for all we know, this kidnapping could be the first step toward an honour killing. I threatened to get the media involved if the police did not make all efforts to find the woman and to ensure that no harm came to her. After receiving assurances of action, I took down the inspector’s phone number and left.

I can’t get this young woman out of my mind as I watch the recent wave of protests against the spate of violence against women unleashed by Rama Sene and other hoodlums in Mangalore and elsewhere. While I fully support their right to choose to go to a pub and make other life-style choices, I worry that they are defining their freedoms way too narrowly.

Why, I wonder, did it take this ugly incidence in a pub in Mangalore to create a sense of crisis that is bringing women and men into the streets in defense of personal freedom? Is it only when violence comes knocking at middle-class watering holes that we will take notice? After all, far deadlier crimes against women are taking place everyday. It has been well-established – and well reported in the media – that honour killings are on the rise throughout Northern India. Nearly one tenth of all murders that take place in Punjab and Haryana involve family members who kill their own kin who dare to break the bounds of caste and creed. Majority of the victims are women.

Another thing that worries me is the soaring popularity of arranged marriages among the same hip crowd that is so protective (and rightly so) of their right to go to a pub and hold hands in public without the moral police keeping an eye on them. 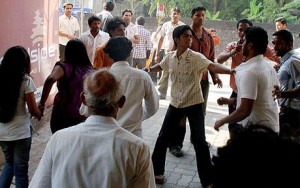 Most of them, I am sure, will condemn the Chandigarh abduction in no uncertain terms. But I am not sure where they will stand when it comes right down to the heart of the matter – namely, the right of individuals to defy family and community and choose to marry someone from a different caste or creed, especially Islam which is so little understood and so aggressively condemned these days. Will they stand with the woman, or will they stand with the father, not so much to condone the violence but to “understand” why he had to stop the marriage?

I am afraid that the principle that it is the right of the individual to make such fundamental choices like marriage has not found much favor with the seemingly modern youth. Their idea of freedom of choice seems to stop outside the institution of marriage where the principle of the-family-knows-best seems to prevail. Surveys show that fairly large majorities – between 60-75 percent – of modern urban middle classes, including IT workers, prefer to have their parents find a mate for them. After enjoying the personal freedoms which an average young person takes for granted in the United States and Europe, many enthusiastically go through the most extravagant weddings, complete with incomprehensible rituals and inexcusable dowries.

As long as they accept that marriages are family affairs, why would they care to fight against honour killings or honour abductions, as in the Chandigarh case? After all, wasn’t the father in this case acting on the principle of father-knows-best? Yes, he carried it farther than the hip set would like, but the underlying idea remains the same.

The unsung hero in this is the young woman who was so badly treated by her family. She had the courage to follow her heart. I am quite sure she did not send pink underwear to the pub-smashing hoodlums: most probably, she does not condone the idea of women going to pubs. But at the same time, her idea of personal freedom is thicker and her battle is much harder and lonelier.

My thoughts and best wishes are with her.

Leave a Reply to Veena X