We’ve all heard the accusations. Stalin, Pol Pot and even Hitler are used so often to counter the moral arguments against religion, that most of us have an answer practiced and ready. I’ll go over some of the common responses to the accusations. Obviously your individual approach must vary depending on the person you’re talking to, so pick your arguments carefully. 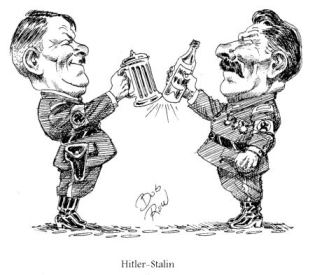 This is usually how it begins. You’re talking to someone about religion, a friend or relative, and you point out religious wars as a reason for them to reconsider their faith. Sometimes the question pops up at this point. Other times the person says something to the effect “Its not religion that’s responsible, its the people craving power who are using religion to their own ends”. So you bring up all those people who truly believe that they are acting in the spirit of their religion. Then comes the question: “What about all those millions killed by the atheists in the last century? Science has been used to commit crimes against humanity” And then the self-satisfied “gotcha” smile, if they’re feeling particularly triumphant.

The most common answer I’ve heard is this:

Despite it being a common response, this is a very effective response to use when dealing with most smart people. However, the average religious person may not be aware of the difference between ideology and an evidence-based system like science. The person may not see the similarities between dogmatic belief systems like Nazism and religion, but just the differences. More seriously, they often see atheism as itself being a dogmatic belief, and some may even try to turn the argument on you by suggesting that it is atheism that is more like communism. This could lead into a whole different argument, on the nature of dogma and the value of evidence, which would lead you away from the primary debate.

This is also often used in response to The Question. Simply put, it involves a detailed revisiting of the facts and numbers of the atrocities committed by these leaders of the last century. This is then compared to the number of people killed in the colonization wars, the inquisitions and other wars that are associated with the spread of religion. Often the debate leads into questioning the religious motivations of Hitler and the connections of the Nazis and the Italian fascists to the Church. Even Stalin was born and raised a Catholic, and Hitler had ties to the Church and is known to have used religious justifications for his genocidal actions.

3) The Argument from Causation – I:

The argument from causation is my favorite response to The Question. It says “Religions call for much of the violence attributed to them. The people who cause the suffering quote the passages that lead them to commit those atrocities. Atheism has no such causative effect”.

Although this is my favorite, it is quite a useless response. People by instinct understand very little about causation and correlation. However, if used along with Part -II of this form of argument along with the dismissal of correlation, given below, it may be valuable. 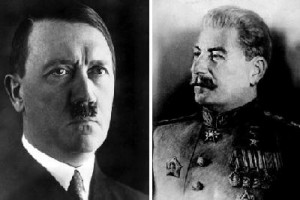 Both Stalin and Hitler had mustaches. So, are mustaches responsible for killing millions?

This line not only pokes fun at the silliness of The Question by dismissing the evidence from correlation, but also presents it in the right context here. This must be followed up with an explaination of the difference between correlation and causation. Quoting religious scripture to “honor” a killing- that’s causation. Mustaches and atheism- that’s correlation.

Use this argument along with both arguments from causation and you will have a tight case. Don’t expect to convince any hard believers with this, though.

Often the first argument from causation leads to a debate on morality in general. So, with some people it may be best to start with this conversation first. Otherwise, you may consider this as an extension of the first argument from causation. Essentially this is it: Atheism is not a belief system on its own, let alone a moral belief system. As has been suggested multiple times by others, we are all atheists about something or the other, i.e., we don’t believe that some things are likely given the lack of evidence for their existence and the amount of contradictory evidence in the observable physical world. For example, most Christians are atheists when it comes to most Gods. Our actions are not determined by what beliefs we do NOT have, but by the ones we do.

The real answer to the morality dilemma is that moral behaviors are both genetic and culturally learned. Just because we don’t subscribe to supernatural religions, it doesn’t mean that we should not have a thorough moral education. In very secular countries like Iceland they have moral education in school, up to the university level. As the influence of religion fades, we must incorporate secular values as well as humanistic morals into society. This is the basis for systems such as Secular Humanism. Religions evolved to function as a form of culturally enforced morality in primitive times, but now with its influence waning we can fine tune our moral culture to reduce suffering.

This is the least intuitive and most complicated argument, so use this only on the most philosophically-minded of your debate opponents. It is actually a philosophical offensive against the religious form of morality, and an extension to the previous argument which was a defense of secular morality. Basically, this argument cedes that morality is not absolute. This terrifies religious people, and even a few atheists. Our moral beliefs are constantly changing depending on the cultural circumstances and our knowledge of objective reality. Although the religions preach absolute morality, most religious people ignore the more culturally inappropriate of the teachings. Yet, they refuse to see that morality is an ever changing idea.

Whether in politics or in society, agreement and co-operation is the only way to establish a moral society. But why Informed Consensus, not just any kind of consensus, like religious consensus for example?

The two parts are equally important. The idea is that uninformed consensus is as dangerous as informed tyranny. Humans are capable of tremendous good, provided they are informed. This information is required to be able to empathize with those who are suffering. It is lack of knowledge about the feelings and causal circumstances of others that often leads to an unjust society. It is true that in the past science was used to justify horrendous crimes. But our knowledge has evolved. Today, it is the most informed among us who are aware of the common origins of humanity and the mutual good or suffering that humans are capable of inflicting. But the science alone is not enough. A secular moral education is needed to complement the information got from science with the desire for consensus. 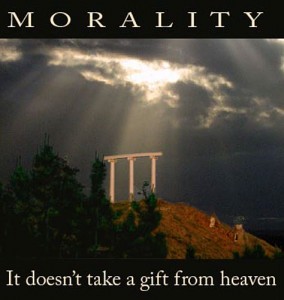 used science to justify their targeting of other races. When science and reason was used by the Nazis to justify ethnic cleansing, they did not extend the debate to include Jews in the consensus. When science was used by slave masters to justify slavery by suggesting that people of African descent were mentally inferior, they were not extending to the slaves the right to participate in that determination, nor in the the right to pick their destiny. No scientist argues that science alone is enough to see a moral society. No atheist must argue that evil will end when religion is dead. But put science and moral education together and we will be on our way to a better society. Without religion we will rid society of much of the ignorance that caused so much suffering and hatred.

We often hear about human rights from people of all denominations. What folks often forget is that human rights is the product of centuries of rational thought. It has become universally recognized (among the educated), at least in theory, that all humans are genetically related and are potentially capable (as groups) of equal suffering, violence and kindness. It was not any religion or any political dogma that achieved this recognition of human sentient value. When religious leaders unite people of different beliefs under a cause, it is always after reason has already established that the groups involved have a common interest. Is it not time we reminded the believers of the fact that they owe the rationalists for this coming together of humanity?

Religions functioned in primitive societies by building some consensus on social and cultural issues. Bits of useful moral codes were incorporated into them as they evolved. In today’s world where multiple religions come together, the absence of verifiable objective information in religion leads to much suffering. The quackery of “religious medicine” and the inherent bigotry of some creeds are examples. Informed consensus is relatively easily achieved in today’s world.  Why not try to reach consensus using the common language of reason? We have the ability to rid society of much suffering, if only we come together as one and reject those superstitious beliefs that divide us.