One may be surprised to note that a new life is beginning for the citizens of Mangalore, in a small stall

The body first: This is the quantum science bio tech optimum energy program for you. As the blurb promises, energy medicine is the future of medicine. The nanotechnology revolution as promised by Fusion Excel international and promoted by Surana Enterprises India and their website being fusionexcel.com. The introduction starts with what is energy and then goes on to promote the quantum science scalar energy pendant created from a mixture of “more than 70 kinds of energy releasing mineral materials selected from Volcanic rock”. It also promises of scalar energy which can do miracles like increasing oxygen supply to blood stream, cleansing of blood of unwanted dirt like fats and cholesterol, pain relief, fighting cancer cells etc. Besides that it also balances both sides of the brain, promises better sleep, freedom from fatigue etc. In short it is the panacea that mankind has been waiting for from a long, long time. 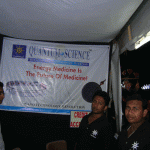 The device can be used by wearing it on a chain or carrying it in ones pocket. There was also a person demonstrating the instant results derived by putting the amulet in ones pocket. I was made to raise my hands which were then put down with his two fingers (obviously he was a man with strength- he was wearing the energy pendant around his neck!). Then he made me put the same in my pocket and lo behold! Even his super powers of the pendant were unable to push down my hands which had instantly become charged with the magical powers of the pendant. He also promised me that the gadget would lower blood pressure, blood sugar levels and reinvigorate me. The person conducting this experiment had been a rickshaw driver and was surely in an authoritative position to endorse the product! Mind you ladies and gentlemen all this for a mere 6,990 rupees.

After the body come the automobiles. I was then shown the device which would cause a revolution in the field of motoring. That was the Extra Milex Nano ceramic fuel saver. It could save fuel and save money. The normal fuel being large clumps of molecules would be miraculously broken into nano particles which would increase the efficiency and mileage, it was also environment friendly. The pollution and emissions would be reduced! It was very obvious to me that the oil cartels had reduced

the oil prices after noticing that this gadget had come into the market. They had understood that the oil consumption would go down significantly and cause the market to crash. So, now we can all understand the reason for the crash in crude oil prices. Well for those ignorant of “science” the pamphlet of Extra Miles has some lessons too! It defines nano and nano technology and also mentions Einstein’s equation linking mass and energy. However, like all good things in life this gadget does not come cheap. It costs Rs.1990 per piece. For a two wheeler fuel tank two are needed. The larger tanks need more in number.

We hear that these gadgets have resulted in closure of a number of petrol outlets in Mangalore. Soon to follow will be the Nursing homes and the medical consultant’s chambers. The pharmacies are on the way to extinction and the mushrooming medical, dental and physiotherapy colleges are being downsized. The population of Mangalore should consider themselves extremely lucky for being considered as the first to receive these miraculous gadgets with the latest technology. A few minor things like the lack of scientific evidence should not come in the way of acceptance of these. The web

site mentioned above showed a number of pictures of “doctors” and testimonials from their ‘patients’. There were also clips of patients being tested for strength before and after wearing the gadget in the same manner as it was done to me by the former rickshaw driver mentioned above.

We would be glad to know the views of the Assistant Drugs Controller for Dakshina Kannada about the gadget which is a cure for all as it contravenes the provisions of the Drugs and Magical Remedies (objectionable) Advertisements Act. We are also informed that any device which can be used in any automobile or any other vehicle should be approved by the Automotive Research Center, Pune. We would also like to know as to how such stalls are allowed in Karavali Utsav by the district authorities?