Update: This is the third part in the series. Here are links to all the parts of Narandra Nayak’s rationalism tour of India: Intro,  Part 1, Part 2, Part 4, Part 5, Part 6.

The New Year started on an optimistic note for us. On the 2nd of January we had a lecture 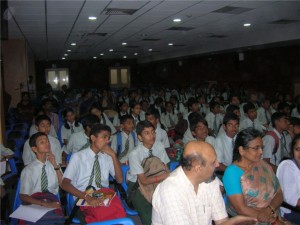 demonstration organized by the Vishweshwarayya Industrial and Science Museum, Bangalore (See photo). There were about 250 people in the audience, including school children and visitors to the museum. There was spirited participation by the students and following that a number of questions from them. After this we went to a school run by Sri Subba Rao one of the most active members of the Bangalore association. There was good interaction with the young students after which I had to start for Hyderabad.

On January the 3rd we had an interactive session with the engineers and other staff of the AP Transco which was organized by the Jana Vigyana Parishath and the staff recreation association. There were more than 100 in the audience and it was standing room only. The theme was how to develop scientific temper among children. I shared my experiences with them exhorting them to allow the questioning faculties of the children to develop so that they could become better in studies as well as other aspects of life. This was followed by discussions and many questions from the audience. The same evening the International Humanist and Ethical Union announced the sanction of a grant amounting to more than Rs.200, 000 for the activities of developing scientific temper. We have many activities lined up for 2009 to train more youngsters to conduct awareness programs in scientific temper all over the country. 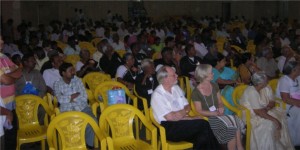 At the World Atheist Conference

On the 4th we proceeded to Vijayawada via Suryapet to participate in the World Atheist Conference conducted by the Atheist Center, Vijayawada. On the way we went to a Dalit village adopted by the IHEU to support them in activities to promote Humanism. There was a public demonstration of so called miracles by Chandriaha who has been actively doing this work in Villages of Andhra Pradesh. On the 5th of January there was a lecture demonstration at the world atheist conference held at the Siddarth College, Vijayawada, on the theme- Methods to Develop Scientific Temper Among the General Public (see photo). The lecture demonstration along with video clips exposing the so-called miracles being performed by the cheats calling themselves god men got a very good response from the audience of several hundreds from India and abroad. 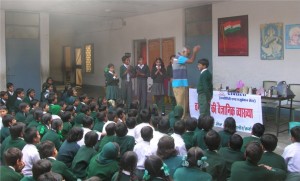 On the 8th I reached Itarsi where we had an exclusive program for the media of Itarsi about promotion of scientific temper. The program got excellent coverage in the press with 6 newspapers carrying stories with photos. On the 9th we had a program for the students of the high school at Khesla near Itarsi. The students most of whom are tribals had a lot of questions about superstitions prevailing in their areas. This was followed by an interaction with the higher primary school students at a school run by the National Power Transmission grid. The inquisitive students were ready with many questions.

On the 10th we had interactions with the students of a school called Excellent School, Itarsi. This was 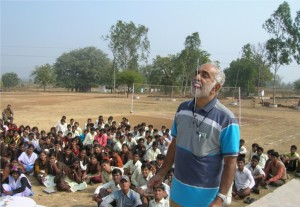 followed by a program for the students of High School, Thikad which is about 15 kms from Itarsi. Most of the students were tribals and had questions about the local superstitions and exploitation by the quacks in their villages. The last program of the day was the most touching- it was for children who were orphans and being looked after an organization called Muskan (smile). They were boys from the ages of three to fourteen and though it was difficult to address such a varied audience, a few tricks and explanations in simple language helped to get the message across (see photo).

On the combating superstitions front we had clear victories. In Hubli, Karnataka, there were claims of an Ayyappa devotee performing miracles by dunking a baby into boiling oil.Our reactions to that were carried in the Times of India on the front page, New Indian Express and kannada Prabha on the front page. I am told by some of our activists that there was a report in some newspapers that the so called miracle had been stopped. What we are worried 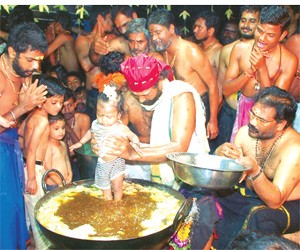 about is not the so called miracle, but that some idiot believing that the baby is really being dunked into boiling oil may do that with the nearest baby and  harm the child! The “miracle” of dunking a baby, a hand, or any other part of the body could be done by mixing a small amount of lemon juice with oil and heating it from the bottom. The intermixture of the layers will make it look as if the oil is boiling while the temperature of the oily layer will not be over a very comfortable 400 C for quite some time! The same could be done by adding some higher density immiscible liquid like chloroform or carbon tetrachloride to water, making it appear as though it is boiling.

On the 12th of January there was an interaction with the students of Wilson’s college, Mumbai, organised by Harsha Badkar. It was great success and went on for nearly three hours. We are also planning to have training programs for the students interested in the program who would like to spread the same awareness among the general public.

I have landed in Mumbai after 4 days in the North eastern parts of Karnataka, the two districts of Bidar and Gulbarga which are the most affected by a form of so called black magic called Bhanamathi. This is also seen in parts of Andhra Pradesh, particularly in those areas which were under the Nizam. 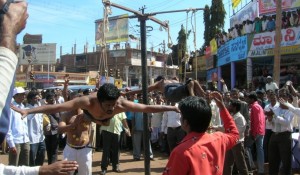 On the 27th we had a progam in connection with the Bidar Utsav. We went in procession from Bhagath Singh circle to Ambdekar circle in Bidar city, pulling a car. Nothing great about that! But, the car was pulled by hooks passed through the skin of the back of our activists Gopal and Selvam. This was watched by thousands of people and whole traffic came to a stand still.They were then hung by these hooks and rotated. There was also a local activist lying on a bed of nails and many othere will tridents passed through their cheeks and tongues. All this was to show to the people that there are no supernatural powers needed to do these things and it was well within the capacity of the human body.

In the evening of the same day we had a fire walk at the Bidar fort in which at least fifty people walked on burning embers. When this was over, the news came about the demise of our ex president R.V.Venkatraman and the festival was cancelled. But, we had our programs without any problems and ours was the possibly only program which was completed. We got very good publicity in the local channels and press.

On the 28th the activists from Coimbatore returned and I continued in Gulbarga. Here we had three programs each on the 28th and 29th. On the 28th we went to the Ambedkar arts and science college in Gulbarga city. Here we had a well attended program with students who took great interest in our work. Many of them wanted to be trained in these techniques of creating scientific temper as they wanted 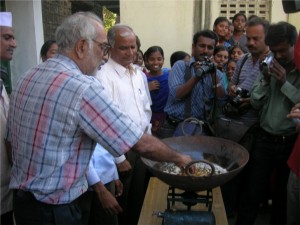 to go their villages and educate others. I promised them that we could have one for them during their vacations. In the afternoon we went to a predominantly Muslim locality called Rahmath nagar to interact with a group of about 100 Muslim women which was arranged by a local self-help group called Al Fathima society. Our demonstration was followed a number of questions and many women asked us about things like spirit possession and some of them also shared their experiences about being subjected to exorcism and such. In the evening we went to a village called Kesaratagi where we shared our thoughts with the villagers who had many questions about Bhanamathi and so called ghosts.

On the 29th we went to a place called Shahabad where we had interactions with the students and staff of a local high school. That was followe by a question and answer session. In the after noon we had two sessions one was with the members of Gulbarga Bar Association and judges of the courts. Though it was a short session, the hall was jam packed with standing room only and I was informed by some of the members that it was for the first time in their history that such a crowd has assembled. Though I cannot be sure of their mind-set we had very encouraging responses from some like-minded members. Then we went to a girls hostel being run by the social welfare department of the govt. of Karnataka. There were about three hundred girls belonging to scheduled castes and tribes. The active role in organizing this was that of the local vice president of the Dalit Sena who was also present throughout the duration. We had excellent interactions with these girls from the age of ten to twenty five. All of them hailed from villages nearby and came from superstition ridden families. They told us about how money was being wasted on rituals like exorcism and poojas.In this program we also

The Bidar program was orgnaised by Dani Babu Rao and Manohar who had peruaded the District adminstration to invite us for the program. The programs at Gulbarga were orgnaized by the Grameena Vigyana Andolanad- the movement to spread science in rural areas. Dr.Ashok Jeevnagi and Prof. H.C. Patil were the enthusiastic organizers. Advoate Nagendra Javali who had taken training from me last year had taken a role in organizing the functions particularly the one at the Bar association. The program at Bidar was with the collaboration of Periyar Drvida Kalagam. Babu Gogineni the executive director of IHEU and Henric a Humanist from Sweden were with us for the Bidar program.

Today (30th January) I am starting for Allahbad where I will be having a training program upto the 5th Feburary. From there I will be going to Sitamarhi in Bihar where I will have another training program for 4 days and then to Betiaha in the same state. I will be returning to Mumbai on the 16th and will be there on the 17 and 18th and will return to Mangalore on the 20th. On the 20th afternoon we are having an interaction with the students of the St.Anns teachers training institute at Mangalore.

Update: This is the third part in the series. Here are links to all the parts of Narandra Nayak’s rationalism tour of India:Intro, Part 1, Part 2, Part 4, Part 5, Part 6.