Institutions, old or new, have a tendency to borrow ideas from each other as they seek to evolve, to revitalize their traditions, to broaden their spheres of influence. We’ve seen this more vividly in recent years as financial institutions redeveloped their models and ideas for mortgages. Newspapers have started to adapt themselves to the new age by embracing blogging and other 21st century technology trends, in an effort not to get left behind. Most tragically, terrorist cells have grown increasingly martial and organized, borrowing training and tactics from military institutions.

Religions are no different. Much like the business model made famous in the United States v Microsoft anti-trust trial and the “Halloween documents”, religions and belief systems have taken, once again, to “embrace, extend and extinguish”. In September, the Vatican embraced evolution, adding its voice against the specter of intelligent design. A few days ago, it embraced science once again when Pope Benedict XVI, like his predecessor, paid tribute to Galileo Galilei, once branded as a heretic by the Catholic Church for telling the truth.  The Papacy was less cordial with Georgetown University’s Peter Phan, a Jesuit theologian, when it launched an investigation into his view of Buddhism as Christianity’s equal on the road to salvation. Most bizarrely, however, is the syncretic adaptation of Hindu scriptures to the Son of Man.

The Sundance Channel in the United States debuted Paul Davids’ documentary, “Jesus in India“, on the 22nd of December. Davids follows Edward T. Martin, who has written two books on the subject, as he treks across South Asia looking for proof of his theory that Jesus spent his lost years in the subcontinent, learning from Hindu and Buddhist monks. His entire theory is based on a supposedly ancient text, the Talmud of Jmmannuel, discovered in Israel, which is considered of dubious origins by most Biblical scholars. It may tickle readers to note that one of the those who discovered this text, a man by the name of Eduard Albert Meier, claims to have had contact with UFOs.

However, Martin is not alone in his linkage of Christ and India. Stephen Knapp discovers correlations between the nativity stories of Christ and Krishna as well as in their philosophies.

Parthenogenesis, or the virgin birth, is a rather popular motif in myths and legends. In Hinduism, Karna, also a figure in the Mahabharata, was born of a virgin, as were his cousins, the Pandavas. Dionysus, of the Greek legends, was said to have been born of a virgin, on a rather familiar day: December the 25th. The other similarities are of a more dubious quality. A manger is hardly equivalent to a prison. Rohini, or Aldebaran as is its astronomical designation, is typically one of the brightest stars in the sky (13th to be exact). It also is part of the constellation Taurus, which corresponds to the vernal equinox, and not December. His last major connection is that of a tyrannical king. This is indeed truly special, given the scarcity of authoritarian monarchs in history.

His connections in their philosophies is even more spartan. It boils, largely, down to both figures having claimed to be the Lord of Creation and to have been righteous. I’m quite sure that this is rather standard of God-men and the like. He connects walking on water with that of walking on hot coals, something plenty of skeptics and rationalists like James Randi and Bill Nye have thoroughly debunked as nothing more than physics at work. His specious logic does not end there. He continues to “prove” that Christianity is a derivative of Hinduism because words (in various tongues) associated with the former are similar to, or derivative of, words from the language related to the latter, Sanskrit. His view of Bethlehem is even harder to swallow as historical record shows the town existed and continues to exist even today.

He does however show a hint of skepticism when he writes:

Since there were no real witnesses of Christ’s birth and hardly any history in the gospels of the life of Christ up to the age of thirty, it is likely they applied the story of Krishna to Jesus’ life. Otherwise, there is little historical evidence that any of it is factual.

While acknowledging the paucity of evidence related to the life of Jesus, he fails to do the same for Krishna. The poetic verses of the Bhagavad Gita according to him are simply of more evidentiary value than the non-poetic verses of the New Testament. The rhymes, it seems, add veracity to the tale.

Others, such as Dr. N. Sharath Babu, a Spicer College professor, connect the Messiah to the Vedas rather than the Bhagavad Gita. The Rig Veda and the Upanishads, written centuries before the birth of the Nazarene, supposedly contain predictions which correlate to the Biblical narrative. The problem lies in the loose translation of verses from these texts in order to confirm one’s own conclusion. Take Rig Veda 10.90.7 (Book 10, Hymn 90, Verse 7), from the Purusha Sukta, quoted in the original Sanskrit:

This is interpreted by Babu as follows:

The sacrificial victim is to be crowned with a crown made of thorny vines.

However, it was translated by Ralph T. H. Griffith, a scholar of indology, as:

The balmed as victim on the grass Purusha born in earliest time. With him the Dieties and all Sadhyas and Rishis sacrificed. 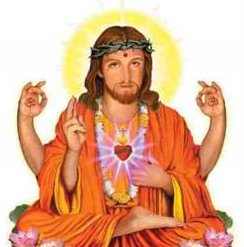 It is hard to say who is right and who is wrong and care must be taken to avoid an argument from authority. Translations of texts in archaic language by different scholars always results in discrepancies. As skeptics, however, we can easily note that Babu gathers his evidence for the Vedic Jesus from various sources, usually in quotes of one or two lines. These sources were composed and compiled in different time periods. This suggests the presence of a selection bias in his research.

Such loose theological scholarship is not limited to doctors. Meher Baba, an Indian mystic, also holds an unorthodox view of the New Testament. The Silent Avatar, as he is known, had a lot to say, ironically, about the life and times of Jesus in a lecture given in 1937 in Nasik. Speaking for Jesus, he says:

You, Judas (pointing to that one) loves [sic] me very much. I turn the key and you go against me for my work. You do not go against me of your own accord. I make you go against me in order to tell people about me. You do it willingly knowing that people hearing you would beat me and crucify me.

Aside from the obvious contradiction, in consecutive lines no less, between the claims of Jesus making Judas betray him and Judas doing so willingly, Meher Baba‘s viewpoint is reflected in the apocryphal Gospel of Judas, made famous in recent times. This Gospel is not accepted as part of the Biblical Canon and its authenticity and narration of events are disputed by modern theologians. It is important to note that Meher Baba held this view before the modern discovery of the text, which suggests that this view is nothing but his own interpretation of Biblical scripture, one without any real evidence or proof.

The larger questions of the existence of the Son of Mary and his divinity are shrouded in doubt and may never be definitively answered, as is the case with most prophets and god-men of history. Nevertheless, both theists and atheists must remain skeptical of charlatans with loose translations and shoddy research. Retrofitting out-of-context quotations and calling it a prediction, thereby extolling the prophetic abilities of age-old sages, or linking various obscure facts in a bold-faced attempt at solidarity, they should be viewed as nothing more than feel-good attempts at defrauding the faithful. If anything, these people are a reminder that atheists serve more than others of their kind with their skepticism; they also help theists adhere to their theological scholarship.

Perhaps there is no word that succinctly describes this religious inclusivism than Bill Maher’s latest neologism: religulous.