Editor’s Note: I had asked the contributors here to say a few words urging a calm response to the Mumbai terrorist attacks from last week. The writers may have different views on the way in which the issue should be addressed and who must be held responsible. However, the one thing that we  can all agree on is that we cannot give up our secularism and limited freedoms in fear or in anger. The response from the public has been calm and extremely understanding, for the most part. Let us hope that there will not be any riots and massacres. More importantly, let us hope that the perpetrators are brought to justice without the loss of more innocent life.

Here are the statements of the writers at Nirmukta:

It would be easy to quote Gandhiji or other notables on non-violence, hatred and persecution and it would be, in my view, equally synthetic in sentiment for there are no words to quell the pain unleashed upon the victims and I cannot even imagine the vengeance they must be feeling in their hearts. Rather than the instinctive blood-lust we succumb to as people, we must, if we are to keep out of an indelible cycle of violence, stay true to India and the constitution on which it stands. For this is what the terrorists wish to destroy, by proxy of the lives they’ve taken. We must resolve to secure justice, liberty, equality and most importantly, fraternity, now more than ever, if we are to remain true to this Republic. To paraphrase a rather memorable response to 9/11, nous sommes tous Indiens.

Holding some one responsible for the acts committed by people belonging to their community is reprehensible. If a few members of a community indulge in acts of terrorism it does not mean all the members are party to it. While acts of terrorism should be condemned retaliation against all go that community are equally condemnable.

Narendra is on his educational tour of India and was kind enough to take a few minutes off and contribute to this collaborative effort.

“The first natural reaction to the Mumbai tragedy is anger, hatred and revenge.  Exterminate the vermin of terrorism from the face of the earth!  But is our first reaction the best one?  The terrorists were also human beings like you and me.  What made them execute innocent people and feel that they were doing the right thing?  The same anger and hatred that we are feeling now. For them, it was the anger for Babri Masjid and Godhra. Looking at the reactions of the public on the media, it appears to me that we are turning into terrorists and demanding blood for blood.  Each innocent that is going to die as a result of our revenge for Mumbai will give rise to 100 more terrorists, who will cause more destruction than the Mumbai tragedy.  Pause and Think.  What would Gandhiji have done? I don’t have any answer on how we should react to the Mumbai tragedy. But I know that more hatred and violence is definitely not the answer..”

Please do not spread communal hatred by irresponsibly blaming all Muslims or pointing your finger at Pakistan. It is foolish, irrational and dangerous. “Some Pakistanis” does not equal “Pakistan as a nation”. One Indian was involved in the blast in the UK. Does that mean that India was involved in the attacks and had sent the man to drive the vehicle loaded with explosives? Please show respect to our neighboring country. Think before you talk.

Let us strengthen our convictions about the need for Humanism as a personal religion and Secularism as a national policy; to fight corruption at all levels; to make discrimination of all kinds punishable.

On the fateful day that the Mumbai Terror  attacks started, I happened to catch it on TV by chance. As the seriousness of the attack began to set in, I felt a seething anger within me. The arrogant inhumanity of the terrorists was infuriating. Anger is the easiest emotion when such barbarism takes place. As a humanitarian and a progressive, suffering is anathema to my conception of a civilized and moral society. As an Indian and a humanist, I feel the voices of the victims in my head when I close my eyes. But as a rationalist, I must ask myself “is anger good enough? More importantly, is anger useful at all?”. The answer ,on reasoned analysis, is a resounding “NO”.

This is a time to reflect, not to react. We all know the results of the American reaction to the 9/11 attacks. Hundreds of thousands of innocent people have been killed and wounded in Iraq and Afghanistan. And the US has never been more at risk of attack from the hundreds of thousands of young terrorists that its irrational and revengeful retaliation has created. Most importantly, the secular and democratic values that America was founded on have been compromised, handing the ultimate victory to those who do not value such freedoms.

I urge all my fellow countrymen to keep these facts in mind over the next few days, as the resilient people of Mumbai pick up the pieces and begin to rebuild the morale of their great city. Let us use this tragedy to come together to combat our common enemies, not to deepen the divisive chasms between people and countries. Let us hope that the politicians will not succeed in dividing us and pitting communities against each other, as they have in the past. Let rationality shine at this time when it is most needed. It is the only way out of this cycle of madness. 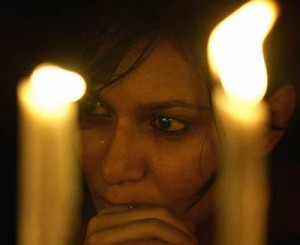 A Woman Mourns at a Candlelit March