The wait is finally over. All those from the majority community who felt ‘insulted’ and ‘humiliated’ and have ‘suffered’ and could not tolerate the ‘appeasement’ of minorities by the ‘pseudosecularists’ can now rest assured: Hindu Terrorists have arrived at last! And the double standards of the Hindutva brigade are in full glare.

Some Hindu youths as well as retired army personnel have been arrested in connection with the bombings of mosques in Maharashtra and Gujarat. (1,2,3) 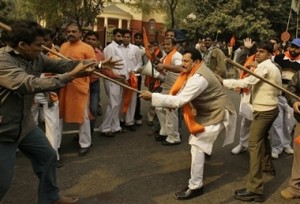 But this is not front page news; after all, it is just the Hindus fighting for a ‘noble’ cause and bombing the nation for its own safety and glory! It has also been reported that there is a full fledged Military School in Nasik to train Hindu terrorists. Is it a happy thing that these brave army men have been brainwashed so much by the RSS ideology to the extent that they took it upon themselves to train the youngsters to make and plant bombs within the country they once defended so valiantly?

BJP, the party that once governed this country, can take pride in the fact that it has a Terrorist Wing of its own! One of the accused, Sadhwi Pragya Thakur, has been a member of its student wing and has shared platforms with the Chief Minister of Madhya Pradesh and the President of the BJP. (1,2) So the BJP naturally feels that Hindu bombers should not be called terrorists; they are fighting for the honor of the Hindus, after all.

Unmasked, the Hindutva brigade is putting up its best double speak and cover up.

The Hindutva Brigade has never been well known to own up its cadres. Even Godse (Gandhi’s killer), independent India’s first terrorist, was disowned by the RSS/Hindu Maha Sabha after the job was done.

This is what Ravishankar Prasad, the BJP spokesperson, said: “There is no question of owning or disowning her (Sadhwi Pragya Thakur). She left the ABVP in 1995-96″. Good! But what was ommitted is that anyone who finishes schooling moves up from ABVP, the student wing of the BJP/Sangh Parivar.

Elementary, Mr. Prasad. How can leaving ABVP be proof enough for her not being part of the Sangh parivar? And the POTA-Demanding-Wing of the BJP – Advani, Modi, Jaitley & Naidu – have suddenly disappeared. No POTA for HIndu terrorists!?

On the other hand, some in the Sangh Parivar/Hindu brigade did own her up. As in all the cases of terror masterminded by the Hindutva brigade, ‘explanations and reasons’ have been provided for these bombings as well. And ‘minority appeasement’ is seen even in these arrests of Hindu terrorists!

Manohar Joshi, the former speaker of the Lok Sabha, the supreme law-making body of our country, feels that the Hindu youth have become bombers because of their disenchantment with the government that has failed to give them justice against the terrorists.

Uma Bharati says: ”If Hindus are found guilty for the Malegaon incident then there should be introspection about such intolerance on part of Hindus who are considered a patient and tolerant community for ages.”

So Hindus can retaliate against perceived injustice. No need for the parliament, no need of the courts: Hindu terrorists have the license to take the law into their own hands, they can make their own laws, convict anyone and punish anyone – hit, kill, burn, rape, bomb, anything. Parliament, courts, law enforcing agencies – all rolled into one. And Tarun Vijay, the editor of Panchajanya, the RSS mouthpiece and master of duplicity, feels that the arrests of the Hindus for terrorist acts has been done to appease the minorities and that it has pushed Hindus to a corner. Right, but it should read RSS, not Hindus, unless we accept his equation. But in the same breath he claims that no Hindu organisation has come in support of the arrested!

BJP and the Sangh Parivar also talk of Uniform Civil Code. By this standard, do all the others born in this country have the same rights as those of the Hindutva brigade?

It is well known fact that the perpetrators of the program in Gujarat in which more than 2000 people were ruthlessly massacred have not been brought to justice even after 6 years. But can this denial of justice in Gujarat be a cause for the Muslim youth to turn into bombers? No, they cannot do that, because they are Muslims! Forget that, Muslims and civil right activists should not even seek legal remedies for the crimes they suffered. Anyone supporting their just demands are pseudosecularists, anti-nationals and hand-in-glove with Islamic terrorists! Even Mushirul Hasan, vice-chancellor of Jamia Milia, is accused of hobnobbing with ‘terrorists’, just because he arranged for legal aid for the students of Jamia Milia arrested on suspicion of helping the terrorists. If Tarun Vijay has his say, then the boys are guilty of treason because they ‘were arrested from the area of the Batla House encounter’. But for the Hindu terrorists, according to Tarun, ‘proof, evidence, and final acquittal may take year’. Wah! Muslim youth are pronounced guilty just because they happen to live near a site of the encounter and their teacher is accused of abetting terrorism just because he happens to provide them legal aid; but Hindu youth arrested for bombing cannot be called guilty and such arrests are done for appeasing the minorities and to push Hindus to a corner! Prof. Hasan has to defend himself, even prove his patriotism!

So Hindus (read RSS) can take the law into their own hands under pretexts such as Fighting ‘Terrorism’, Ram Janma Bhoomi, Ram Sethu, Conversion, etc., and murder, rape, burn or even plant bombs while denying these ‘rights’ to others. And then they keep talking about the need for a uniform civil code! (Mind you, not a uniform criminal code!) That is the Shining India (or Rama Rajya)!

Confused by this dangerous double-speak? Fail to understand the fascist terror? Then you continue to believe the RSS propaganda and wait for the poison to destroy this nation. OR, if you seriously believe that this great nation of ours deserves truth and peace, then start questioning the hate propaganda, the lies circulated as truths, the dangerous double speak. That is the least we all can do. Question.

Bombings on our soil by anyone, Hindu or Muslim, is an act of treason. Defending it by citing excuses is equally treacherous. RSS, Indian Mujahideen and anyone who bombs or creates terror are all terrorists. And let us call them so.