The Hindu god, Vishnu, is said to have taken the forms of Rama and Krishna, amongst many others.

Hanumana, the monkey god, is considered by many (including, perhaps, Tulsidas) to be an incarnation of Shiva. Now, Hindus have one more avatar to add to this illustrious list: Amaranth. 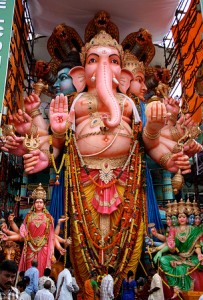 Ganesha – Bigger Than Your Average Elephant

Ganesha, the elephant-headed god and the son of Shiva (and plenty of other titles), has graced this Earth by revealing himself to us as a 4-foot-tall embodiment of beauty and grace. More intriguingly, this incarnation is quite unlike previous avatars. Not only is it the first avatar of this millennium, it is of an entirely different species and it even has a Latin name!

Sam Lal, a Guyanese immigrant and a manager at a Manhattan uniform company (and possibly plenty of other titles), hurt his back, three and a half months ago, lifting a box. As a consequence, he was in pain due to a bone spur near his spine and bulging discs in his neck. This pain, however, was entirely relieved when this 60-year-old devout Hindu’s prayers were answered by the emergence (through concrete) of the Remover of Obstacles.

Skeptics, like the “Bad Astronomer” Phil Plait and “Friendly Atheist” Hemant Mehta, are quick to denounce this avatar as mere pareidolia; as more carnation than incarnation. Botanical experts at the Queens Botanical Garden, have joined in by pointing out that this manifestation of the god is more commonly known as Amaranthus gangeticus, common to the subcontinent, Africa and Central America.

Hindus, however, are not buying it. Many have flocked to see it for themselves. One such person, Kris Ram of Flushing, New York, has, unlike Plait and Mehta, seen the plant for himself, and believes this to be a real miracle. Another, Uddit Patel, has offered this as unequivocal proof of the existence of God. Apu Nahasapeemapetilon, the world-renowned proprietor of the Kwik-E-Mart in Springfield and devotee of Lord Ganesha, plans to visit when his filming schedule allows.

Perhaps, skeptics will only be assuaged when the ultimate test of divinity is performed: feeding the avatar spoonfuls of milk! Ganesha’s biggest problem might not be cold-shouldered bloggers, but the upcoming winter frost. His avatar is not expected to live through it.