When I was younger, playing Bach on classical guitar, I would wonder about God’s influence on the composer and how those beliefs showed in his music. I could imagine the hand of God playing the organ through Bach at a Sunday mass. During my undergrad music-history courses I was exposed to the scope of religion’s grasp on the early history of Western music. And then I became an atheist.

My exposure to religious music led me to wonder about the scope of religion’s influence in music and culture all over the world. To quote Edward DIckinson:

By virtue of certain laws of the human mind which are evident everywhere, in the highest civilized conditions as in the savage, the religious emotion, intensified by collective suggestion in the assembly, will find expression not in the ordinary manner of thought communication, but in  those rhythmic and inflected movements and cadences which are the natural outlet of strong mental excitement when thrown back upon itself. These gestures and vocal inflections become regulated and systematized in order that they may be permanently retained, and serve in their reaction to stimulate anew the mental states by which they were occasioned.

I started to dig online for other examples of religions’ influence on music. Here are some of the things I found. While I was researching Jewish music history, I found this little tidbit: “… there is no book more full of music than the Torah.”

Music was always a part of the people, but it took on new significance with the construction of the Temple at Jerusalem. From the moment that King David “danced with all his strength,” in front of the Holy Ark as it entered Jerusalem, all religious ceremonies would be accompanied by music. In the Temple itself, there was a choir with some instrumental accompaniment that sing as the daily and special occasion sacrifices were brought.

I found the same influence of religion in Asiatic music as well:

Religious chant and vocal intonation are convincingly the central core of religious experience worldwide. This fact is not solely the result of independent arising in different regions of the world but owes as much to Indic or Asiatic influences that have been disseminated over thousands of years

Now, without the illusion of God’s hand on the organ, I wonder how do musicians get inspired? Can we replace God’s influence with awe and wonder that the natural world can bring, and can we replace church music with secular music? Could music be the emotional bridge between people and science? Here’s an excerpt from the Academy of Evolutionary Metaphsyics:

If the scientific worldview could be interpreted in such a way as to satisfy these emotional needs, then it might be possible to convert large numbers of liberal Christians. If that happened, then many liberal Muslims, who are even more desperate for an alternative belief, might follow. Eventually the entire world might be united by a common belief in the scientific worldview. 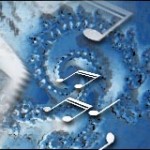 Nature is what inspires me now that I have rejected religion and the idea of God. The scope and vastness of the universe is extremely inspirational. If we continue to instill science and music education in the children of tomorrow , we may be able to replace religion’s role in creating inspiring music and art. It is possible that at some point in the future of our species we will actually hear the sound of alien music from a galaxy far, far away. Until then, I will continue to be influenced by the spectacular symphonies that the vast expanses of the universe create in my mind.