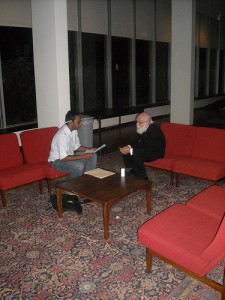 Last week I had the fortune of being at one of James Randi’s amazing lectures in New York City. Randi, popularly known as the Amazing Randi, is a magician of repute who has dedicated the last few decades to investigating paranormal claims. His organization, the James Randi Educational Fundation is world famous for offering a million dollar prize to anyone who can demonstrate genuine supernatural powers. Randi has been on the Tonight Show with Johnny Carson 22 times. At this event that was organized by the NYC Skeptics at the Caspary auditorium in Rockafeller University last Friday, the 80 year old Randi was as insightful as ever, leaving the crowd in laughs and amazement. By the time he was through, it was obvious why he is considered one of the leaders of the skepticism/ rationalism movement in America. After the lecture, I had the wonderful experience of interviewing him for a few minutes, in the lobby of the building.

Me: Mr Randi, are you familiar with India and the problems we have there with con-men and snake-oil salesmen?

Randi: Oh yes, very much. I read reports from India regularly, and… it’s typical of the whole world really. But in some ways it will be more exaggerated in a culture like India with quite a large population, but it’s rather circumscribed, you know…and they may have an ethnic background that lets them be deceived by these things.

Me: I know you’ve worked in the East before, like in the Philippines, for example. Do you find any major differences or similarities between the East and the West that could explain how these different people react to paranormal claims?

Randi: Yes, there are a lot of similarities…more similarities than differences, frankly. I’ve always said that it’s very much like cooking. Say you’re in Korea and eating Kimchi, which is cabbage. But we eat cabbage here too! So often the language will be different, the approach will be different, but it’s the same tricks when they’re using deception of various kinds. They took me to South Korea and they said “Oh you will find things here that you have never seen anywhere else”. I turned to my assistant after 15 minutes and said “It’s the same old crappiolla”. It’s the same thing, just a different flavor. 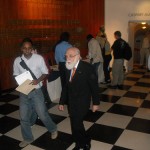 Me: In Indian culture, religion is often entwined with these offerings that the con-artists sell to the superstitious. For example, Hindu mythology says that the Gods are reborn in human form, as avatars. This belief makes people susceptible to being taken in by these crooks. In your opinion, is criticism of religion alongside that of these con-men a good strategy?

Randi: Oh yes! I think so. The argument is: how different is it? If it’s an irrational claim made with no supporting evidence – all kinds of anecdotal material but no hard evidence, then that will not stand examination.  That applies to religion and it applies to the paranormal. So, religion is just another aspect of the paranormal, really.

Randi: Well, I’ve seen some very good films, made by the BBC as a matter of fact, about people like Premanand who do excellent work by going out into these areas. That seems to be an effective strategy. But, that’s always been the problem. The same thing happens in Arkansas, for example, with farmers and such…they may believe things that people in the cities would just laugh at. But they tend to believe these things because of the ethnic and the cultural background and the fact that in many cases they have a lot of poverty and they’re looking for magical answers.

Me: As you know we have many rationalist organizations in India. Recently we’ve had some success with demonstrations. For example, the Science and Rationalists’ Association of India goes out into the villages and performs the same tricks that the conjurers and swamis perform. Is this a good approach in your opinion? 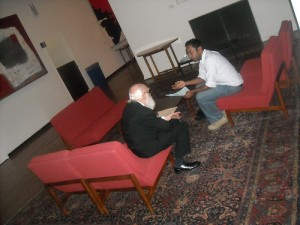 Randi: I think that’s a very, very good strategy, especially if they say “You must understand these are tricks, this is what you have been fooled by and these people are not to be trusted”. I think you can get through, even to people who are not very skeptical about these things if you do it properly. A man like Premanand, you know he’s a great personality; he’s always had a wonderful personality. So when he does these things and shows the people how it’s done, I’ve seen the crowds go whoa! It just never dawned on them that they could be fooled that easily. He’s a good man, Premanand; a very noble man.

Me: Rationalists in India often face grave danger. For example, Prabir Ghosh of the Science and Rationalists’ Association has faced many attempts on his life. How do we continue to do this work in the face of such deterrents?

Randi: This is a problem. It’s true that there are dangerous elements that are out there. People in the rationalist movement in India have said that I should not go there because of Sai Baba who probably has a great hatred for me, because I have criticized Sai Baba. He’s a very poor sleight-of-hand-man. It’s very, very transparent, what he does…and yet he has millions of followers and a lot of money.

Me: Did you know that he often conjures up cheap Japanese watches? 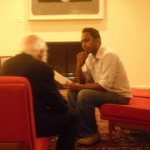 Me: Globalization and the internet have helped these con-men sell their products worldwide. So, we have ayurveda clinics and yoga studios popping up all over the world. How do we keep up with the ever-extending reach of these pseudoscientific and often quack concepts?

Randi: Well, we have in this country Deepak Chopra who is selling ayurvedic medicine, and this is something from medieval times and it doesn’t really work. These are medieval teachings; certainly not medieval knowledge- there’s no knowledge involved in it.

Me: There was a study that came out recently that confirmed earlier reports of heavy metals, sometimes deliberately added to these so-called medicines.

Randi: Yes, lead and even arsenic at times. Yes, some of these medicines can be deadly.

Me: In India, a major obstacle to criticizing the con-men is that politicians are often devotees of the swamis. Do you have any comment on this association between politicians and the con-artists?

Me: What advice would you have for a young paranormal investigator starting off in India? 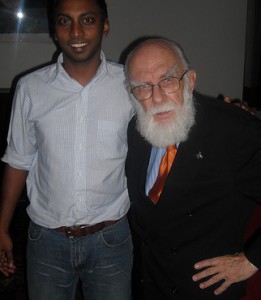 Randi: I would say, read a lot. There are a lot of books out there- things published by Prometheus press, for example. There are some very good books- books written by Joe Nickel, I’ve written a few myself you may have noticed, and I think there’s good information out there for you to have. You’ve got to really study up on these things. And get to know some conjurors- some of the jaduwallahs (yes he really said “jaduwallas”) and what not; people who are trying to be honest and not trying to convince people that they have supernatural powers. They will gladly confide in you. Look at Premanand, he’s done very, very well with that! You must understand Premanand is a man that I practically worship. He’s a king in my estimation. He’s a wonderful, very noble gentleman, and he deserves all the respect he can get. Indians should be very happy for having a man like that, but they need more Premanands.

Me: I’m sure he’ll be very glad to hear that.

Randi: Oh, he knows that already. I’ve expressed it to him many times; I adore the man. I’m very, very, very fond of him.

Me: James Randi, it’s been a pleasure talking to you.

Randi: Thank you; it’s been a great pleasure.

James Randi is the founder of the James Randi Educational Foundation. This interview was recorded on Friday, 10/10/08.