(Editor’s note: This article appeared here first posted by Tom Clark in May, 2005. Images were added by the editor from sources linked to.) 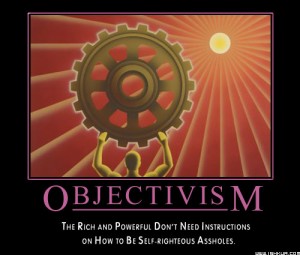 The Objectivist Center and the Ayn Rand Institute, organizations devoted to safeguarding and disseminating Ayn Rand’s legacy of radical libertarianism, did an effective job of letting the world know about her 100th birthday in February (2005).  Op-eds about Rand’s philosophy appeared in newspapers across the US and abroad, celebrating the sovereignty of the individual and condemning the infringements of big government on personal freedoms.

Running a Google news search using the terms “free will” and “determinism” will pick up a good number of such op-eds, and you can find their sources here and here.  It turns out that Rand’s Objectivism includes among its tenets a strong commitment to free will and rejection of determinism (unless it’s the determinism of self-determination).  Here’s a taste from an op-ed in the Freelance Star of Fredericksburg, by Michael S. Berliner, board member of the Ayn Rand Institute:

Her philosophy, Objectivism, upholds objective reality (as opposed to supernaturalism), reason as man’s only means of knowledge (as opposed to faith or skepticism), free will (as opposed to determinism–by biology or environment), and an ethics of rational self-interest (as opposed to the sacrifice of oneself to others or others to self).

The irony, of course, is that there’s no way to square Objectivism’s ostensible commitment to scientific objectivity, reason, and anti-supernaturalism with the idea of a self-made soul.  Science shows that individuals in all their aspects and capacities are fully a function of their environmental and biological determinants, not literally self-made.  True, once we become autonomous, rational agents, it’s usually our own desires that determine our choices, including some choices that may influence our very character and values.  But the capacity for such self-modifying choices, and their direction, for good or ill, can always be traced back to influences that were prior to both our character and our choice-making capacity.  Such tracing is at the heart of empirical explanation; it’s what science does for a living, partially.  This is to say that, on a scientific understanding of ourselves, our autonomy and its uses are fully natural and fully determined, ultimately arising out of conditions that were not within our control.

The Objectivist insistence on the idea that individuals are causally privileged in some sense, that they have strong, metaphysical free will, seems designed to shore up Rand’s radical individualism.  Without it, we are less the heroic gods of free market capitalism, throwing our wills around, and more the humble, interdependent, lucky or unlucky creations of biology and culture, some of whom harbor considerable delusions of grandeur.  To give up such delusions wouldn’t be to give up either our real individuality or our real powers as human agents, but simply to place them on a more realistic, scientific footing.  And being scientific (or not) about ourselves has moral consequences.

For there’s a link between Objectivism’s unscientific homage to the self-made self that takes ultimate credit (or blame), and the ruthless egoism of Rand and many of her followers.(1) Indeed, egoism becomes the cardinal virtue in “the ethics of rational self-interest” (mentioned in the op-ed quote above), which supposedly reflects our self-caused nature to look out mainly for ourselves.  But there are two errors here in addition to thinking we’re ultimately self-made. 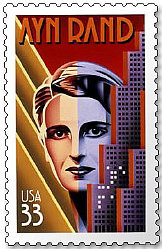 One is to suppose that in empirical fact we are merely self-interested creatures.  But we aren’t; there are many altruistic bones in our body.(2)  Second, it’s to commit the naturalistic fallacy of arguing that if we are selfish by nature, that means we should be selfish.  But there is no direct implication from a natural is to an ethical ought.  Instead, we have to justify our moral claims, in this case the virtue of self-interest, not simply point to our natural inclinations. True, if we were literally incapable of altruism, that would render moot any moral injunction to nurture thy neighbor (this could be called the “feasibility constraint” on morality).  But since it turns out we are capable of altruism, arguments for it might possibly gain purchase on us, and fortunately they often do.

So a science-based, objective understanding of ourselves calls into question the basic premises and conclusions of Randian Objectivism: that we are self-made, exclusively self-interested, and morally required to pursue our self-interest and eschew altruism.  In championing the myth of human contra-causal exceptionalism, the followers of Ayn Rand are simply reflecting the beliefs of the vast majority in the US and the world about free will.  But in taking the myth to such extremes, they show how belief in the supernatural, self-choosing self can sometimes have morally unpalatable consequences.

1. See Cathy Young’s portrait of Ayn Rand in Reason, which shows how Rand’s ideology of willpower erased any capacity for sympathy.

2. There is a growing literature on reciprocal altruism as an adaptive component of our evolved moral sense.  See for instance Daniel Dennett’s Freedom Evolves, ch. 7, “The evolution of moral agency” and Owen Flanagan’s The Problem of the Soul, ch. 7, “Ethics as human ecology.”

The author is the director of the Center for Naturalism